People wishing to express their opinions outside tonight’s third and final presidential debate at the University of Nevada, Las Vegas’ (UNLV’s) Thomas & Mack Center should prepare for a long walk. A “public expression area” has been set up at 4700 Paradise Road, more than half a mile from the debate hall.

Google Maps estimates that those who want to exercise their First Amendment rights will need to walk for 13 minutes to reach the free speech zone from the Thomas & Mack Center. 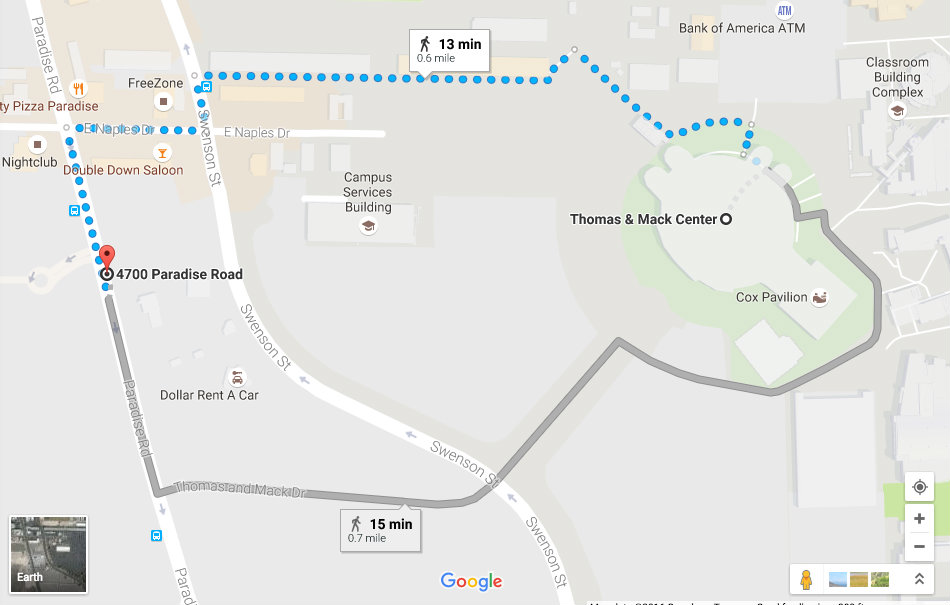 The Las Vegas Review-Journal quoted UNLV administrator Vince Alberta, who justified the segregated area, saying it provides “the most direct line of sight to the Thomas & Mack Center and closest available area to working media.”

FIRE Legislative and Policy Director (and UNLV alum) Joe Cohn approximates the distance from the debate hall to the free speech zone as more than 10 football fields, adding that UNLV’s actions go too far to be considered a legally permissible “time, place, and manner” regulation.

“That protesters in UNLV’s free speech zone can see the Thomas & Mack building is irrelevant if people going into the building cannot hear what they have to say or even know that they’re there,” Cohn said. He noted that free speech zones have historically been used to keep protesters away from political events, and are now routinely used to quarantine all kinds of speech on college campuses.

“Using a presidential debate, which is emblematic of the free exchange of ideas, to instead stifle citizens’ speech on a public university campus is, in many ways, the ultimate irony,” Cohn said.

According to the Review-Journal, Alberta implied that there might be other options for students wishing to express themselves tonight.

“The public expression area is an option, but not the only option,” Alberta said, but didn’t elaborate.

FIRE has reached out to both Alberta and UNLV’s Assistant General Counsel Susan Carrasco O’Brien for clarification on where, precisely, students may speak out on campus tonight. Specifically, we asked whether they will be able to exercise their First Amendment rights closer than half a mile from the debate hall.

We’ll let you know what we hear.