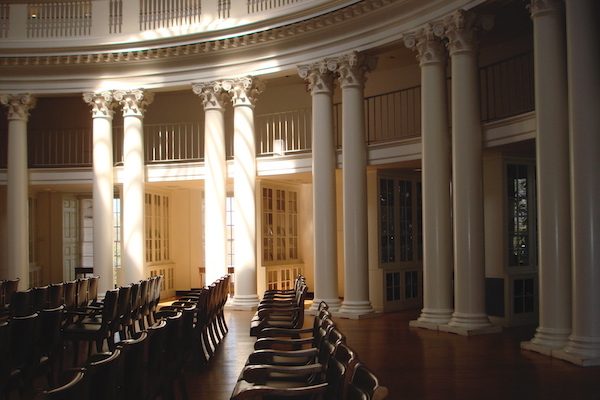 The University of Virginia is known for its stunning Rotunda, its founder — President Thomas Jefferson — and its honor code. The university’s Honor Code, adopted in 1842, requires students to pledge never to lie, cheat, or steal; its student-run Honor Committee imposes a harsh punishment on any student found guilty of violating the “community of trust”: immediate expulsion from the university. This punishment, called the “single sanction,” provides a harsh deterrent for potential offenders. However, it has also become a nightmare for due process.

The Honor System is fundamentally a zero-tolerance policy; a mandatory minimum that gives an educational death penalty to all found guilty of any form of lying, cheating, or stealing. While the Honor Committee claims to only take “significant” cases, this term is deliberately vague, and results in what is usually a fundamentally disproportionate response to student conduct. Further, while universities with honor codes appear to have significantly reduced cheating, only a few U.S. universities maintain single-sanction honor codes — and little evidence links such a system to further reduced cheating. Thus, not only is a single-sanction system dubiously useful, but its real human cost is only getting worse.

As of a 2015 report, the average Honor investigation lasts some 112 days. This number — nearly four months — rises to over 6.5 months if a student claims a mental disorder contributed to their alleged Honor offense. Even more troublingly, the average investigation duration includes those students who admit guilt after seven days or less by submitting an “Informed Retraction” which allows them to avoid expulsion by leaving the University for two semesters. Thus, the average length of an Honor investigation is likely much higher for those students who decide to contest their charge.

When most Honor investigations drag out over months, a student’s entire college career — and their whole world — is held in the balance.

While many universities deny students sufficient time to prepare a defense when charged with a conduct violation, overly long investigations also pose a threat to due process. When public universities adjudicate purely academic cases, such as possible dismissal for poor academic performance, schools are only required to have “careful and not arbitrary”  procedures. However, when it comes to disciplinary cases like those handled by the Honor Committee, students are entitled to, at a minimum, “(1) notice of the charges against them, (2) an explanation of the evidence against them, and (3) an opportunity to tell their side of the story.” Beyond this bare minimum, when the student is facing a punishment as harsh as expulsion, the constitutional right to due process often demands even more robust procedural protections. Students, however, are entitled not only to a fair proceeding, but also a timely one — something UVA’s Honor Committee consistently fails to provide. When most Honor investigations drag out over months, a student’s entire college career — and their whole world — is held in the balance.

This brutal combination — a single sanction paired with a monthslong investigation — has real consequences. As one student, accused of and eventually found guilty of cheating, wrote in a 2019 report:

The summer of 2008 was the hardest time in my life. I lost my hair. I couldn’t eat or sleep. I developed kidney infections and panic attacks. I could not focus on my classes or friends or extracurricular activities. I seriously considered taking my own life.

Being accused of plagiarism, as this student was, is a serious charge, but it should not cause suicidal thoughts. However, when students charged with Honor offenses face not only a grossly disproportionate punishment for their alleged offense, but a monthslong, opaque, and dehumanizing investigation, there is little question why a student might spiral as the stress of uncertainty mounts.

In 2020, the Honor Committee voted to begin considering Honor charges related to Title IX offenses. Previously, if a student lied, cheated, or stole in conjunction with a Title IX offense, the Honor Committee would not investigate these instances. The obvious benefit of such a policy is that it allows students, particularly those accused, to testify in Title IX matters without fear of exposure to another unrelated Honor charge. However, this protection is now gone.

Involving the Honor Committee in Title IX cases leads to a near-perfect blend of inadequate due process, and a draconian system with little opportunity for student redemption.

When conducting a Title IX investigation, complete testimony is of utmost importance. With the looming threat of an honor charge (which, again, carries the sanction of expulsion), respondents and victims alike are disincentivized — ironically — from telling the truth. For example, a student who perhaps stole a bike after leaving their accuser’s house might not give information that would exonerate them from a Title IX charge for fear of being placed in double jeopardy.

Troublingly, an innocent student could actually be incentivized to withhold such exonerating information if it could reveal an Honor charge, as the Honor Committee sanctions over half of charged students, while the Title IX office finds a mere 21 percent of accused students responsible. Further, when bearing in mind the emotional toll of a lengthy Honor investigation — even for those whose charges are eventually dropped for lack of evidence — it is easy to see how this mechanism can be used as a method for retaliating against an accuser.

Involving the Honor Committee in Title IX cases leads to a near-perfect blend of inadequate due process, and a draconian system with little opportunity for student redemption. UVA — and the UVA students who run every step of the Honor process — are falling prey to a destructive train of thought. This view holds that merely being accused of one of the University’s three deadly sins means they no longer deserve compassion — that they, in short, get what they deserve.

The only way out of this cruel system is to change it radically. UVA’s Honor Committee must not only stop taking Title IX-related cases and provide students timely trials, but more fundamentally the UVA student body must, as they nearly did in 2016, vote to end the single sanction. Without these measures, UVA’s oft-lauded “community of trust” remains, in reality, a community of fear.

Emma Camp is a rising senior at the University of Virginia and a FIRE Summer Intern.