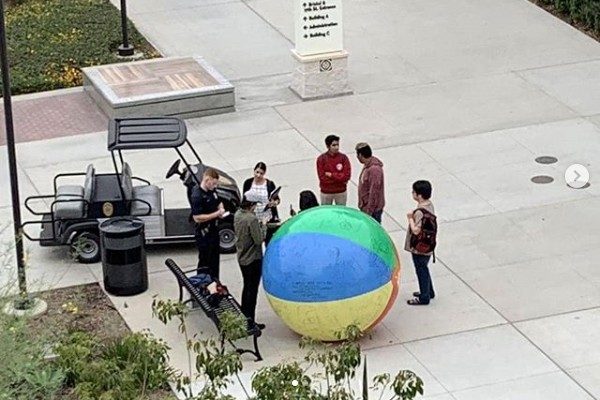 The policy changes follow a dogged campaign by members of a Santa Ana student organization to vindicate their First Amendment rights and the rights of their peers through lasting changes to campus policy. The students were represented in their fight by attorneys from the Foundation for Individual Rights in Education as part of FIRE’s Stand Up For Speech Litigation Project.

“These students have been there every step of the way, fighting for their own rights and the rights of their peers,” said Marieke Tuthill Beck-Coon, FIRE’s Director of Litigation. “Their dedication to defending their civil liberties and those of others is admirable and necessary to our democracy.”

Former students Andrew Rivas, Boston Bolles, and Jocabed Torres didn’t ask for this fight. Last November, their chapter of the nationwide organization Young Americans for Liberty set up a “free speech ball” — an oversized beach ball upon which passing students are invited to write messages of their choice — on Santa Ana’s campus. But after an hour, an administrator and uniformed campus police officer demanded that the ball be deflated.

The students asked what policies they were violating, but received no answer. Instead, the Santa Ana administrator claimed that the writing on the ball, which included a drawing of a penis and a swastika, violated Santa Ana’s code of conduct. As a police officer took photographs and asked the students for their identification, the students deflated the free speech ball.

“We think everyone has the right to say whatever they want,” said club member Jocabed Torres, speaking to student newspaper el Don at the November 2018 event. “[T]hat’s what I want, to protect everyone’s freedom, even if I don’t agree with it.”

A few days later, Rivas, Bolles, and Torres were charged with violating the Standards of Student Conduct of the Rancho Santiago Community College District (of which Santa Ana College is a member). They faced potential discipline for violating provisions of the code banning “obscene” expression, “vulgarity,” and “hate speech.”

FIRE wrote an emergency letter to Santa Ana President Linda D. Rose to remind her that Santa Ana is a public college bound by the First Amendment — and thus forbidden from punishing students for engaging in peaceful expressive activity. The college soon cleared the students of all charges.

Even with their charges dropped, the students didn’t stop fighting for free expression. Represented by FIRE, the student organization pressed for permanent revisions to the student conduct code to ensure that the unconstitutional speech codes wouldn’t silence them — or any of the district’s 53,000 other students — again.

In an April 26, 2019 letter from FIRE to the district chancellor, FIRE wrote, “[W]ithout knowing that the YAL members can expect to encounter constitutionally-compliant policies and practices in future semesters, we will be forced to file a lawsuit to protect their ability to fully exercise their rights on campus.”

Last week, the college district formally revised its policies to bring them in line with the First Amendment, securing a lasting victory for the expressive rights of all students within the district.

“This is the mission of YAL — to get college students to really think about what we are being taught in institutions of higher learning,” said Torres. “To provide another perspective that might be different than the one college students have been exposed to.”