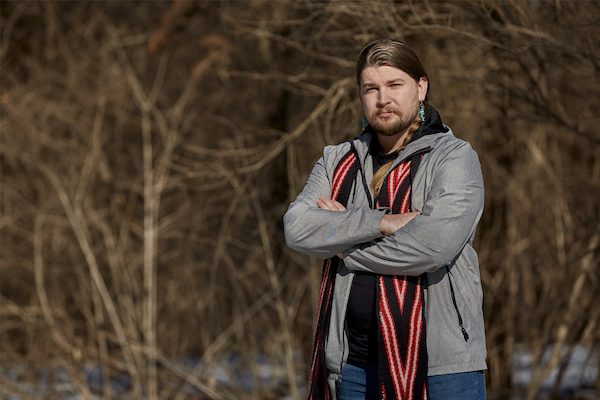 LAWRENCE, Kan., Feb. 8, 2022 — After facing censorship, coercion, and stonewalling, Jared Nally fought for the rights of student journalists — and won.

Today, a district court ordered Haskell Indian Nations University to adopt sweeping policy reforms that will protect the First Amendment rights of students at the federally operated university and safeguard the editorial independence of the award-winning student newspaper, The Indian Leader.

The order implements an agreement that Nally and Haskell filed late Monday, and culminates a year-long battle after then-President Ronald Graham forbade Nally, former editor-in-chief of The Indian Leader, from engaging in routine newsgathering activities. Haskell interfered with the student newspaper’s financial and administrative operations by stonewalling requests to confirm the paper’s funding and account balance and refusing to officially recognize the paper for an entire academic year.

The order resolves all but one claim in the lawsuit filed by the Foundation for Individual Rights in Education on March 2, 2021.

“I hope this case not only protects the next generation of student journalists at Haskell, but empowers individuals at other institutions to realize they have rights and options when it comes to using their voice,” said Nally.

Under the order, the university is forbidden from retaliating against students in the way that it retaliated against Nally for engaging in routine journalistic practices. In October 2020, Graham issued a “directive” requiring that Nally accord the “highest respect” to administrators and others during his newsgathering. Graham let his directive stand for three months before quietly rescinding it. (Graham did not tell Nally about the rescission until three months later.)

FIRE wrote to Haskell in January 2021 to demand that the university revise its restrictive policies, including one Graham invoked in his directive, which required all expression to be consistent with a list of amorphous terms including “respect” and “integrity.” In May, just one day after FIRE asked the court to stop Haskell from enforcing the policy while the lawsuit was pending, the university rescinded it on its own. Under the order, Haskell cannot reinstate the policy, or establish any new policy that requires student speech to conform to amorphous values. In other words, the university must now allow all students to express themselves freely, even if administrators consider their expression “disrespectful.”

Importantly, in the wake of events in which Haskell administrators refused to explain an apparent shortage in The Indian Leader’s funding for months, the order also ensures that the university will be transparent about funds allocated to the student newspaper in the future. Under the order, Haskell must give The Indian Leader insight into its funding — and a way to independently verify that it is not being shortchanged funds if administrators do not like what the paper has to say.

“It’s the role of a student newspaper to hold college administrators accountable,” said FIRE attorney Katlyn Patton. “But Haskell didn’t let the paper do its job, so a lawsuit held them accountable instead. FIRE is pleased The Indian Leader can now continue its award-winning legacy as the country’s oldest Native American student newspaper without fear of censorship.”

While speech is free, censorship is costly. Under the agreement, the university must pay $40,000 in attorneys’ fees.

Nally’s fight isn’t quite over. He also seeks damages against Graham, who was removed from his post shortly after FIRE filed its lawsuit. (FIRE’s letters remind university leadership that they can be held personally and financially responsible for threatening freedom of speech and freedom of the press.)

In July, the court dismissed Nally’s damages claims on the grounds that a First Amendment retaliation claim against federal officials is rarely, if ever, available. But on March 2, exactly a year after Nally filed his lawsuit, the Supreme Court will hear a case concerning the availability of damages against federal officials who violate First Amendment rights. In January, FIRE filed an amicus brief urging the Supreme Court to recognize that speakers who experience retaliation at the hands of federal officials should be able to recover damages, and FIRE intends to represent Nally and The Indian Leader as they appeal the dismissal of their damages claims.

“Graham is a prime example of a federal official who abused his power and should not be shielded from the consequences,” said FIRE’s Vice President of Litigation Darpana Sheth. “We urge the Supreme Court to do the right thing and affirm that federal officials must pay when they violate First Amendment rights.”