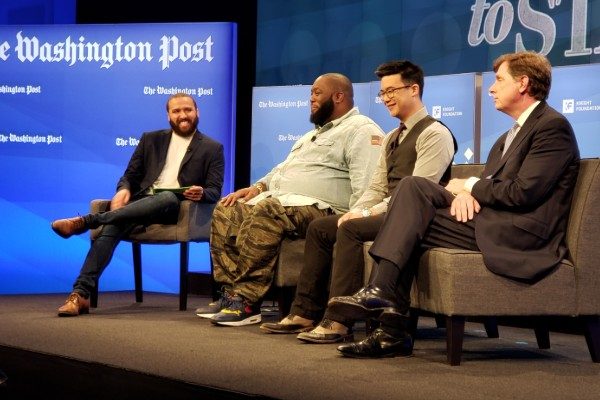 The Washington Post and the Knight Foundation Monday hosted their 3rd annual Free to State summit on the First Amendment in Washington, D.C. The event included a series of live panels that, this year, focused on “subjective interpretations of free speech protections when it comes to artistic expression.” Several FIRE staffers were in attendance for the panel discussion on “Artistic Expression and The First Amendment.” Today, video of the event is up and we think it’s worth viewing for a number of reasons, including the panelists’ discussion of several FIRE issues.

“Artists are not in charge of seeing the bar and stopping at it,” he said at the event, “Our job is to jump … to push limits.”

FIRE agrees. And our 2018 report on campus art censorship, “One Man’s Vulgarity,” delves into that very topic; specifically, the recent history of artists struggling to keep their voices in academe.

FIRE has, likewise, followed The Slants’ legal battle against censorship of their band name. We documented their journey on several episodes of FIRE’s So to Speak podcast, including a video interview conducted during their legal battle and a recap of the Supreme Court’s favorable ruling.

You can watch other “Free to State” panels and find our more about future speech-related events over at The Washington Post.