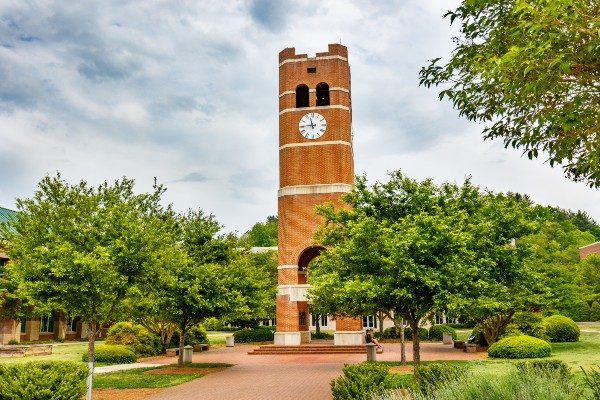 Administrators at Western Carolina University apparently decided to start off the school year by taking an explicitly anti-free speech stance that one might call “bold” if 1) so many other institutions weren’t already doing it, and 2) they weren’t pretty sure they could get away with it.

In a story that will likely seem familiar to readers, since you have read similar stories over and over again since May with only Mad Libs-style replacement of names, dates, and locations, some students at WCU were filmed making comments many people found racially offensive. A concerted effort was then launched online to report them to their university, and the public university has now thrown them out* and condemned them publicly.

At this point, this has happened so many times that we’ve practically become accustomed to seeing our nation’s colleges and universities abandon principle by deliberately derailing young people’s lives, insulting them publicly, and maybe ending their ability to get a college education, all for saying something they had the legal right to say. And WCU has just done it to five more people.

WCU isn’t the first university to do this, and it won’t be the last. But the situation there shares enough common features with many other cases that it’s worth discussing them, pointing out how they have become part of the “script” schools follow to defenestrate students whose expression they find disagreeable, offensive, or just politically inconvenient, and why they are morally and in some cases legally indefensible. Since this examination would otherwise be far too long, this will be the first in a series of blog entries.

Act 1: “Someone is saying bad things on the Internet!”

First the video, piece of writing, or other utterance is picked, seemingly at random, from all of the objectionable content one can find on the Internet, and is posted without context to social media platforms. In the WCU case, this consisted of two different videos, one with three female students, one with two male students.

The video with the female students, which appears to have been taken by aiming a phone at some other playback device, opens with one woman who appears to be chanting along with a rap containing the phrase “make a nigga happy.” There is a weird cut, part of that repeats, and then it cuts abruptly over to another segment of video (which appears to be from the same room) showing a different woman. She is in the middle of a sentence: “[unintelligible] a cracker, you’re allowed to call them a nigga. Not with an E-R, just with a fucking A.” By the end of that, the camera is already swinging over to a third woman, who says “Just with the A, not with the E-R… let’s pipe it down.” A man whose face is only partially visible leans in and says “Nigga,” after which the third woman goes on to say something that sounds like, “If you don’t like my Snapchat story, gladly take me off. . . take me off. You don’t have to add me back.” At one point, a man, off camera, says “fucking block her.” The entire video is 24 seconds long. It is not clear what the broader context of the video might be, whether it was the entire original video, or why it has breaks and a repeated part in it.

I hope @WCU handling this cause y’all don’t want the Black students to act out!! 🤮 pic.twitter.com/xyvqBfefTy

The video with the males is too long to be transcribed here. While the posted snippets of what appears to have been a longer video are denuded of their context, it appears that one of the men had been cooking on a grill before the video began, made an “OK” sign with his hand to someone in the vicinity, and that that person or persons thought he was making a “white power” sign at them. The two men in the video then talk in indignant terms about how they are not racist and how the OK sign is not a white power symbol, but in the course of doing so, one of the men uses the word “nigga,” saying that he is not racist, and following it with, “But if you do know some nigga gals who wanna come over and fuck, lemme know.” (Two other uses appear not to be the slur, but a similar-sounding Snapchat username, “Negus.”)

Many or most people would find one or both of these videos offensive to at least some extent. However, like many of the statements that led to what is now called “cancellation,” what has been widely ignored is that both of the videos actually involve comment on societal and political issues. The first addressed whether and when people of different skin colors can acceptably use racial slurs, and in what contexts. The second addressed the argument about whether the “OK” hand sign should be interpreted as a “white power” sign and therefore avoided. (This latter argument even arose in the confirmation hearings of Supreme Court Justice Brett Kavanaugh.)

While this is a generalization, it’s probably safe to assume that most people in America would prefer that contentious societal issues such as race, especially in the current environment, not be discussed using the terms these students chose or in the manner in which these students expressed themselves. But this does not mean a public institution can punish them for doing so. As the U.S. Supreme Court held in Cohen v. California (1971):

To many, the immediate consequence of this freedom may often appear to be only verbal tumult, discord, and even offensive utterance. These are, however, within established limits, in truth necessary side effects of the broader enduring values which the process of open debate permits us to achieve.  That the air may at times seem filled with verbal cacophony is, in this sense not a sign of weakness but of strength.  We cannot lose sight of the fact that, in what otherwise might seem a trifling and annoying instance of individual distasteful abuse of a privilege, these fundamental societal values are truly implicated.

In fact, agencies of the government like Western Carolina University are prohibited from punishing the mere utterance of racial slurs or other examples of what is frequently and carelessly called “hate speech” — a term without legal effect in the United States.

“Hate speech” prohibitions are problematic for many reasons, the most obvious of which is the fact that what is “hateful” is highly subjective and varies from person to person, meaning that the range of punishable speech would vary dramatically according to who was in power. But in this case, I’d like to focus on another important, and frequently neglected, reason that the law protects Americans from being punished even for the most ideologically unpopular speech.

We’ve practically become accustomed to seeing our nation’s colleges and universities abandon principle by deliberately derailing young people’s lives, insulting them publicly, and maybe ending their ability to get a college education, all for saying something they had the legal right to say.

It’s rare to see someone actually discuss the sheer scale of the punitive regime that would be necessary to “fairly” and consistently enforce hate speech regulations. This is true even if, out of all of the objectionable speech imaginable, we limited ourselves to punishing people only for uses of some form of “the n-word.” I searched Twitter for the word “nigga” as I wrote this blog entry and had to scroll down through 16 pages of tweets just to get past those that used it in the previous 60 seconds. (The -er version was far less common, with “only” 12 individual tweets using it within the last minute when I searched.)

The vast majority of these speakers will go entirely unpunished, not because their offenses are less serious or meaningful, but simply because nobody pointed them out. They certainly won’t be denounced by public officials and thrown out of a public university, stripped of their livelihoods, or suffer whatever other punishment the authorities deem to be appropriate at the time.

Failing to enforce hate speech prohibitions equally is the only thing that makes those prohibitions possible.

This highlights the manifest injustice behind any system of government “hate speech” regulation that boosters of such laws never talk about: the fact that no non-totalitarian society even makes an effort to deliver “equal justice under law” by enforcing hate speech prohibitions evenly, because failing to enforce hate speech prohibitions equally is the only thing that makes those prohibitions possible. (Admittedly, were I a booster of official censorship, I might not go out of my way to point this out either.)

Some quick lawyer math: Assuming only 4 tweets using “nigga” per page (which is probably low and ignores other forms of the word), 15 pages of such tweets per minute (lower than I found), a mere 8-hour “workday” of racial slur usage (hopelessly optimistic), and that each person uses the word twice (to account somewhat for repeat users), you end up with 15,360 people per day who must be punished in some way for their expression, if we’re opening the gates to government regulation of this speech.

Absurd? A nightmare? Yes, on both counts. But that’s the logical conclusion of the precedent WCU and so many other institutions are setting when they punish students solely for their expression — not for any actual act of harassment or discrimination.

There are two other options, of course. The first is to enforce such restrictions unjustly and arbitrarily, hoping it will serve as some kind of deterrent, breaking a few eggs (students’ educations and careers) to make their political omelet. This is the course that our nation’s institutions are taking. If they wish to punish people solely for their expression — and boy, do they ever! — they can hardly do otherwise.

The other is simply not to punish people for expression, with a few limited and well-defined exceptions made clear in First Amendment law. That’s the course we all thought America was taking. Whoops!

In my next entry, I will discuss Act II: Anatomy of a Cancellation.

*Or, at least, that’s what WCU wants you to believe … more on this in a future installment.

An earlier version of this article included an incorrect transcription of one of the videos. It has been corrected. FIRE regrets the error.