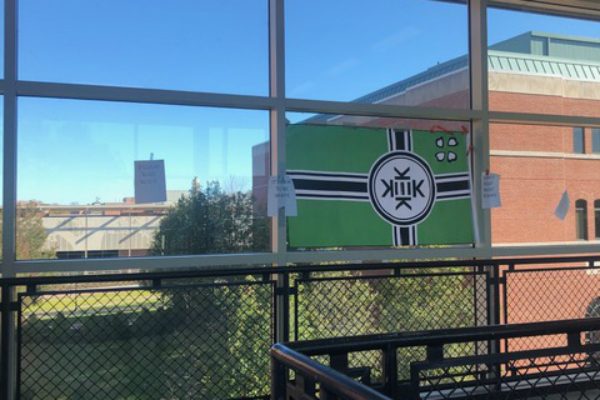 Last week, after unidentified persons posted flyers declaring “It’s OK to be white” and “Islam is right about women” alongside a “Kekistan” flag at Western Connecticut State University, its president vowed that, if caught, those responsible would be subject to criminal prosecution and, if they’re students, expulsion. The discovery of the display at WCSU yielded, according to President John B. Clark, a “full scale police investigation” involving the FBI, Connecticut State Police, and local police.

There is a distinct possibility this is the work of outside agitators. If correct, we will take the appropriate action to defend our university against such virulent attacks and take action against these individual(s). I want to state directly and without equivocation that if any member of our university community is found to be party to these revolting actions they will be subject to the severest disciplinary actions, including dismissal as well as possible civil and criminal actions.

Again, please rest assured that we are taking every measure possible and working with our law enforcement agencies to find and prosecute these sick individuals and defend our university.

Eugene Volokh, a law professor at UCLA, made inquiries of WCSU and shared further information and a photo of (at least part of) the display:

The university spokesman also mentioned to me that an “alt-right flag” (seemingly the so-called Kekistan flag) was “posted on a classroom building window along with some of the flyers.”

As Volokh observes, content- and viewpoint-neutral rules concerning where and how flyers are posted may be enforced by public institutions — but their enforcement must also be viewpoint neutral. In other words, if the university were to apply equal penalties to anyone who put up a display in this manner, regardless of whether it was an American flag, rainbow flag, or “Kekistan” flag, then it may likely do so without abridging the First Amendment. Indeed, while it’s not clear whether WCSU has a formal policy regulating where and how flyers may be posted on campus, a university website notes that bulletin boards are available for student groups’ use, but “glass and walls are not appropriate posting locations.”

Clark’s statement, however, very strongly suggests that such viewpoint-neutral treatment is not what he has in mind for whoever posted this particular set of displays. Unless expulsion from the university, criminal prosecution, and the involvement of multiple law enforcement agencies is the normal procedure whenever a WCSU student Scotch tapes a flyer to a wall, it’s hard to read President Clark’s remarks as anything other than a clear threat to treat those who post these particular phrases and images far more harshly than those whose expression he finds more congenial.

WCSU’s Student Code of Conduct also prohibits “[c]onduct prohibited by any . . . state . . .  law.” President Clark’s announcement followed on the heels of the arrests of two students at another local university, the University of Connecticut, for daring one another to shout a racial slur. Those students were arrested under an unconstitutional statute dating to 1917:

It takes no leap of imagination to suspect that Clark might be aware that students at his state’s flagship university were recently arrested for racially-offensive language, given that it was not just a local but a national story, and that this interpretation of the criminal law could be conveniently treated as a student code violation as well.

FIRE explained why the UConn arrests were unconstitutional just last week, and as with UConn, WCSU may not seek arrest and prosecution under this statute without violating the First Amendment. As we wrote after the arrests of the UConn students, whose utterances of a racial slur directed at nobody now finds them in criminal courts, Connecticut police abuse even this unconstitutional law, ignoring its own limitation to commercial advertisements and using it to arrest (or stack up charges against) people who are homeless, mentally ill, or who simply direct race-based insults at police, including white officers.

President Clark’s statement also raises concerns about the fundamental fairness of any adjudication of the matter. WCSU’s policies afford an accused student “the right to be heard by an impartial Hearing Body.” That impartial body is delegated independent authority to determine the “appropriate sanctions,” including the ability to “take into consideration any and all prior violations of the Code“ and “the authority to defer the imposition of any sanction when deemed appropriate.”

The statement is ambiguous: It’s a truism that a student found to have violated the university’s code of student conduct would be subject to dismissal, as WCSU says that any violation of the code of student conduct — no matter how minor — may result in expulsion. If Clark intended his statement as an assurance that the sanction here would necessarily be an expulsion, that is a guarantee he could not properly make. In either event, should a hearing board end up expelling a student for this conduct, the validity of that determination will certainly be clouded by Clark’s statement.

While universities can enforce reasonable and content-neutral time, place, and manner regulations without violating their obligations under the First Amendment, the transparently viewpoint-based treatment of this particular incident, coupled with the expansive use of what amounts to a hate speech statute is extremely troubling. Universities that allow, let alone proclaim, that their disciplinary decisions will be based on political factors are opening a Pandora’s Box — one that will assuredly be abused by administrators (and even law enforcement officers) to unlawfully penalize disfavored expression on their campuses.