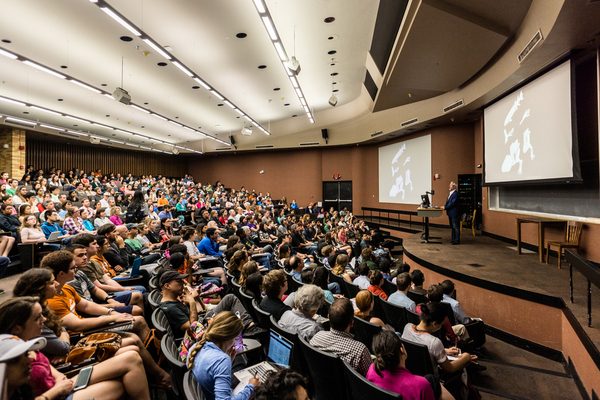 Amidst all of the higher education legislation affecting free speech and academic freedom that my FIRE colleagues have tirelessly covered for FIRE’s Newsdesk this year, a bill signed into law last week by Iowa Gov. Kim Reynolds has mostly escaped notice.

That may be because this particular legislation, House File 744, primarily seeks to bolster commitments to protecting First Amendment rights that public colleges and universities in the state are already bound to uphold. For instance, the legislation calls on the state’s Board of Regents to “develop materials, programs, and procedures” for faculty, administrators, and student government officials to ensure proper First Amendment training when it comes to things such as holding campus events and registering student organizations. The legislation also calls for annual campuswide First Amendment trainings for the general community, and creates a mechanism by which universities can assume student governments’ role in disbursing student fees if the student government fails (or refuses) to do so in a manner consistent with the First Amendment. (HF 744 applies to both K-12 school districts and public colleges and universities, and portions of the legislation aren’t applicable to higher education.)

If it is determined, after exhaustion of all available administrative and judicial appeals, that a faculty member knowingly and intentionally restricts the protected speech or otherwise penalizes a student in violation of this subsection, the faculty member shall be subject to discipline by the institution through the normal disciplinary processes of the institution, and such discipline may include termination depending on the totality of the facts.

The likeliest place where a faculty member is going to be in the position of potentially violating a student’s expressive rights is in the classroom, and so this portion of the legislation necessarily has implications for a professor’s academic freedom. After all, if professors find themselves under investigation or facing possible sanctions relating to potentially suppressing a student’s speech in the classroom, the key question to be answered is whether or not a professor’s academic freedom rights are a sufficient defense.

Generally speaking, a professor’s academic freedom gives them considerable latitude in managing the classroom atmosphere and setting the tone of discussion. Professors are empowered to stop students from talking out of turn and to prevent the class from becoming a free-for-all, and to cut students off if they are being disruptive or off-topic. They can also, in many circumstances, prompt students to demonstrate their knowledge of a particular topic, and to provide scholarly critiques of their responses. In numerous circumstances, a professor’s duties can involve inhibiting student expression in ways that do not violate their expressive rights.

A sense that the legislature is watching could nudge universities into conducting lengthy, invasive, and unnecessary investigations into speech or conduct demonstrably protected by a professor’s academic freedom.

That said, students should be treated fairly and equitably by their professors. They shouldn’t expect that professors won’t sometimes disagree, even vociferously, with their beliefs, but they do have the right to expect that professors won’t punish students academically on that basis (which has happened). Students don’t have the right to avoid demonstrating proficiency with concepts they disagree with, but they do have a right not to be compelled to hold specific political beliefs as a condition for receiving academic credit (which has also happened). And, of course, students have the right to be free from unlawful harassment, whether from professors or other students.

Professors can violate these rights, and when a fair investigation and hearing properly concludes that they have, some form of sanction is often in order. This could be in the form of an informal discussion with one’s department chair, a written warning or reprimand, or, in extreme cases, termination. In all such instances, the persons best equipped to evaluate the professor’s conduct are the faculty, who can properly weigh academic considerations against the totality of the established facts.

But despite the fact that professors can, and in some instances do, violate the expressive rights of their students, it’s questionable whether the remedy needed to be codified into Iowa law. The law does defer to institutions’ investigative processes, which may or may not provide ample due process protections for professors. Ideally, those processes should be able to separate instances where a professor’s conduct is protected by academic freedom from instances when it isn’t. Where the law aligns with the proper workings of this process, it should hopefully have little impact.

And yet, it’s easy to see how this new law can cast a shadow over the process. A sense that the legislature is watching could nudge universities into conducting lengthy, invasive, and unnecessary investigations into speech or conduct demonstrably protected by a professor’s academic freedom. Likewise, it’s easy to imagine universities sanctioning a professor when they otherwise wouldn’t. And in cases where a professor’s purported classroom expression or conduct becomes the subject of a viral controversy (in which legislators have shown a demonstrable willingness to call for the termination of professors in violation of their academic freedom), it’s all too easy to imagine this provision of the law acting as a thumb on the scale against the professor.

All of this is speculative at this point, of course. But given the legislative appetite for controlling expression in the classroom we’ve seen this year, even to the point of inducing students to record their professors, it’s natural to wonder what pressures this law might exert on universities’ investigative processes, and how that might impact academic freedom. FIRE will be watching.

In the meantime, faculty with questions or concerns can email facultyoutreach@thefire.org, or submit a case to FIRE if they worry about a violation of their rights.

Additionally, if you’re interested in learning more about the legislative climate for campus free expression, you can check out the FIRE Faculty Network webinar on the topic we conducted earlier this spring.