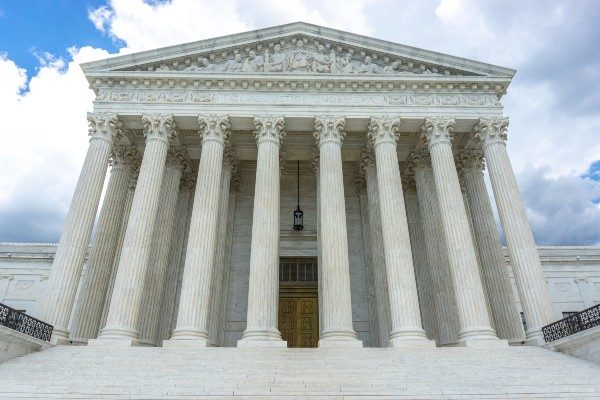 For decades, the Supreme Court has confirmed that when the government violates First Amendment rights, it causes “irreparable injury” to those silenced. Freedom of expression is so vital to our democracy that censorship is intolerable, even for a short time, and money alone does not adequately remedy its harm.

But questions posed from the bench during the Court’s oral arguments last week in Uzuegbunam v. Preczewski flipped this fundamental principle of constitutional law on its head. Some Justices appeared to question whether chilled speech constitutes a legally cognizable harm, and whether damages that cannot be quantified financially are permissible at all.

The case began as a straightforward First Amendment challenge to a public college’s restrictive “free speech zone” policy. But when the college revised its speech code after being sued — aiming to deprive the court of jurisdiction to continue hearing the lawsuit — the case was transformed into a battle over how courts account for the harm of censorship. When a public university promises to change its censoring ways after being sued, are silenced students left without legal recourse? May a court still find in the students’ favor, even if the only damages now at issue are “nominal”? Or has their irreparable injury been repaired?

Worryingly, questioning at oral argument suggested that well-established First Amendment doctrine governing the harm sufficient to bring suit may be on shaky ground.

The facts of the case are simple. As a student at Georgia Gwinnett College, Chike Uzuegbunam was prevented by campus police from talking to peers about his faith outside of the school’s two tiny, heavily regulated free speech zones. After Uzuegbunam and another student filed suit, Georgia Gwinnett jettisoned the zones, and a federal district court declared the case moot. With the zones gone and Uzuegbunam graduated, the court decided there was nothing left to adjudicate. On appeal, the U.S. Court of Appeals for the Eleventh Circuit agreed, ruling that Uzuegbunam’s claim for “nominal damages” — i.e., a token sum of money recognizing an irreparable injury, like being silenced by your school — was not enough by itself to sustain the case.

The Eleventh Circuit’s decision effectively let Georgia Gwinnett off the hook. Although the college had enforced its unconstitutional policy to stop Uzuegbunam from exercising his rights, it escaped judgment. To be sure, Uzuegbunam’s suit compelled Georgia Gwinnett to fix the problem, and in doing so advanced the First Amendment rights of the 11,000 students at the college. But preventing future harm to himself and others doesn’t fully rectify or recognize Uzuegbunam’s past injury. Worse still, the outcome might suggest to other students that they shouldn’t bother standing up for their rights.

Because the Eleventh Circuit’s decision stands at odds with rulings from other circuits and settled law, civil liberties organizations like FIRE were hopeful when the Supreme Court agreed to hear Uzuegbunam’s appeal last July. We trusted the Justices would agree that censorship demands legal redress even if its harm to students is difficult to quantify financially. If public colleges may so easily evade legal responsibility, the law will stagnate and students will have less incentive to fight back in court when their First Amendment rights are violated.

Worryingly, however, the questioning at oral argument instead suggested that well-established First Amendment doctrine governing the harm sufficient to bring suit may be on shaky ground.

The Court has long recognized that First Amendment plaintiffs don’t have to be punished for their speech before challenging a restrictive law or policy. Plaintiffs possess standing to sue if they can demonstrate that they wanted to speak, but chose not to because they faced a credible threat of punishment. The silence allegedly engendered by the challenged policy — what Justice William Brennan and his colleagues identified as the “chilling effect” — is harm enough to allow the case to proceed.

This is a well-established principle. Just last October, the Fifth Circuit cited the chilling effect in holding that University of Texas at Austin students represented by Speech First, an advocacy organization, had sufficient standing to challenge the school’s speech codes, even without enforcement. But questions from some Justices in the Uzuegbunam case signaled doubts about its continued viability.

For example, Justice Sonia Sotomayor’s questions focused on co-plaintiff Joseph Bradford, who alleged that he refrained from speaking for fear of being stopped like Uzuegbunam. “I’m a little lost as to how someone can just walk into court and say that chilled me from speaking, and that would be enough,” Justice Sotomayor remarked. Justice Stephen Breyer struck a similar note, asking the students’ attorney: “How does he have a concrete injury? Where is his concrete injury?” Sotomayor added: “Generally, you look at what a person does, not what they say they wanted to do.”

But the Court’s First Amendment precedent contradicts that assertion — and correctly so. “If the rule were otherwise, the contours of regulation would have to be hammered out case by case — and tested only by those hardy enough to risk criminal prosecution to determine the proper scope of regulation,” wrote Justice Brennan in 1965’s Dombrowski v. Pfister, striking down Louisiana statutes prohibiting pro-communist speech. And — as the plaintiffs’  counsel in the Uzuegbunam case explained in response to Justice Breyer — at the motion-to-dismiss stage, the students’ well-pleaded allegations about their desire to engage in protected speech and the credible threat of punishment should have sufficiently established an injury-in-fact for standing purposes.

Chief Justice John Roberts pushed back, arguing that the plaintiffs’ theory of the case “melds the inquiries into standing and the merits.” In other words, the Chief Justice explained, in a case “where there’s no compensable damages, there’s no concern about future injury, no repetition,” and only nominal damages at stake, a ruling as to whether the students have sufficiently alleged an injury-in-fact for standing purposes effectively doubles as a ruling on the merits. A court would be abandoning its usual procedure of determining standing first.

But that’s not quite true. Representing the United States, participating as amicus curiae, Deputy Assistant Attorney General Hashim Mooppan pointed out that even after finding standing to sue, a court might nevertheless proceed to find at trial that the alleged “suppression of speech is permissible under the First Amendment.” Even if nominal damages are the sole remaining remedy, a well-pleaded injury-in-fact may be enough for standing, but not enough to ultimately win. For example, a student might have standing to file a suit challenging a college’s time, place, and manner regulation, but after review, a court could still conclude that the regulation passes constitutional muster.

As FIRE argued in our friend-of-the-court brief, nominal damages are particularly important for college students:

Equitable-relief claims are frequently mooted by graduation or by revision of the challenged policy, and speech restrictions typically do not inflict financial injuries warranting claims for compensatory damages. Nominal damages, which address violations that do not result in substantial financial loss, are often the only remedy available.

The Court won’t issue its decision for a few months, but watch closely for it. Because despite the Court’s long-standing recognition of the crucial importance of free expression, the questions posed by some Justices suggest a troubling willingness to make it harder for silenced students to secure lasting justice.