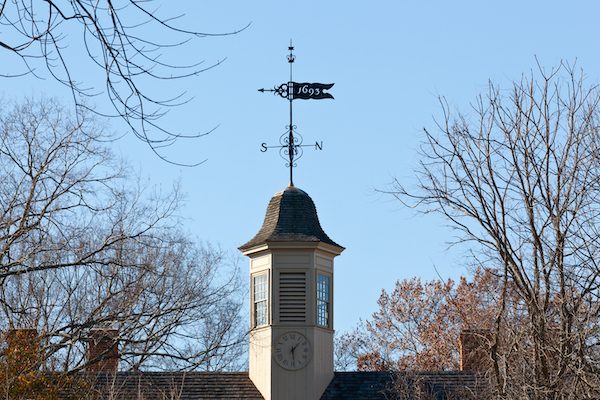 Upholding free speech rights on campus requires more than good policy. While colleges and universities receiving FIRE’s “green light” rating are compliant with the First Amendment on paper, administrations frequently struggle to accurately and evenly apply those policies in practice.

The College of William & Mary is a perfect example. The institution has made tremendous strides in the last 15 years. After former William & Mary President Gene Nichol resigned in 2008 after refusing to censor a provocative “Sex Workers’ Art Show,” the college made rapid progress toward better protecting civil liberties, jumping from a “red light” to a “green light” rating in just two years.

But maintaining good policy can be almost as difficult as implementing it, and college administrations that fail to reaffirm their commitment to free expression risk creating a climate of chilled speech on campus.

Just as students led the charge to make William & Mary a green light school back in 2009, today, the strongest safeguards of free speech at William & Mary are programs run by students, not by the administration. William & Mary is home to the Conduct and Honor Advisor Program (its version of a Student Defenders program), and The Flat Hat, the campus newspaper. FIRE has praised both groups as model organizations for protecting free speech and due process rights, and The Flat Hat has been known to pull no punches in its criticisms of the administration.

Notably, the Conduct and Honor Advisor Program, a non-partisan organization, does have a strong relationship with the William & Mary administration. The Flat Hat, which has the liberal lean typical of most college newspapers, enjoys strong First Amendment protections on campus, as it should at a public institution bound by the First Amendment. However, politically conservative individuals and organizations do not fare quite as well at William & Mary.

The administration’s lack of transparency could easily have a chilling effect on students with unorthodox opinions who no longer know whether William & Mary will stand by them if their civil liberties are violated.

Most notably, left-wing student protesters disrupted a talk by Claire Guthrie Gastañaga, the executive director of the ACLU of Virginia, when she tried to speak on campus in the fall of 2017, a few months after the deadly march in Charlottesville. In protest of the ACLU’s decision to represent Jason Kessler, the organizer of the now infamous Unite the Right Rally, students and members of the William & Mary chapter of Black Lives Matter employed a heckler’s veto, creating noise during the event to prevent Gastañaga from offering her remarks or speaking to attendees one-on-one.

Inside Higher Ed reported that William & Mary spokesman Brian Whitson “declined to answer whether students would be disciplined for the protest, though he said the university takes ‘this matter seriously’ and was ‘taking appropriate action.’”

Though the William & Mary administration may have earnestly attempted to handle matters out of the public eye, this level of privacy does not bode well for free expression. The administration’s lack of transparency could easily have a chilling effect on students with unorthodox opinions who no longer know whether William & Mary will stand by them if their civil liberties are violated — or whether opaque “action” will be taken behind closed doors.

Tensions flared again in October 2020, when William & Mary’s pro-life student organization, Tribe for Life, ran into trouble after reserving a campus public space — a collection of chalkboards in a courtyard outside the science center — to write messages and slogans protesting abortion. Just a few hours after Tribe for Life put up their work, pro-choice members of the William & Mary community erased all the messages and replaced them with postings supporting abortion.

The details of the situation remain murky.

Anne Whelan, a member of Tribe for Life’s executive board, confirmed that the William & Mary professor responsible for overseeing the chalkboard told Tribe for Life that they had reserved the chalkboard for an entire week, just like the club had done in previous years. However, since this incident, another student told The Flat Hat she reached out to that same professor, who suggested that further changes have been made to this yet-unwritten rule.

“I emailed her, and she said that you can reserve it,” the student told the paper, “but they only track that for big events to make sure they don’t conflict, and that anyone can use [the reserved chalkboard] at any time to do anything with it.”

Only in private, did William & Mary choose to side more openly with free speech.

The unresolved details of William & Mary’s chalkboard reservation policy mark another instance of the administration choosing to stay quiet in the face of anti-free expression behavior from students, contributing to a climate of chilled speech.

According to Whelan, Tribe for Life’s president, Chloe Folmar, hoped that the William & Mary administration would make a public statement defending freedom of speech. No such statement was issued. Instead, an administrator in the college’s compliance office sat down with Whelan in response to numerous complaints from Tribe for Life members that they had received verbal and online threats of violence and felt unsafe on campus.

Only in private, did William & Mary choose to side more openly with free speech. And even then, a college compliance officer told Whelan that, short of a true threat, there was not much the college could do.

“She said that if someone was not being targeted, like saying ‘Oh, if I see you, I will hurt you,’ or something, then they can’t really stop it,” Whelan said.

The compliance officer may have accurately interpreted First Amendment law in this case, but where was this defense of civil liberties when the heterodox group needed protection?

William & Mary has done the important work of changing its policy, paving the way to creating a campus that fully protects and fosters free expression. The administration had every right to show compassion and speak out against threatening or violent language being used against its students while also noting punishment may not be warranted.

Because cultural tides can change rapidly, censorship anywhere is a threat to free speech everywhere.

However, the administration’s silence and lack of clarity after the recent incidents with Claire Guthrie Gastañaga and Tribe for Life have been deafening, leaving students — particularly those with non-mainstream views — unsure about the college’s true attitude toward free expression.

William & Mary’s transition from a “red light” to a “green light” school can serve as a reminder of why free speech should matter to everyone, not just conservative or heterodox students. Fifteen years ago, the roles were completely reversed, with conservative groups at William & Mary receiving protection while liberal students and nonpartisan causes faced administrative censorship. Because cultural tides can change rapidly, censorship anywhere is a threat to free speech everywhere.

Barrett Fife is a rising junior at the College of William & Mary and a FIRE Summer Intern.

Schools:  The College of William & Mary