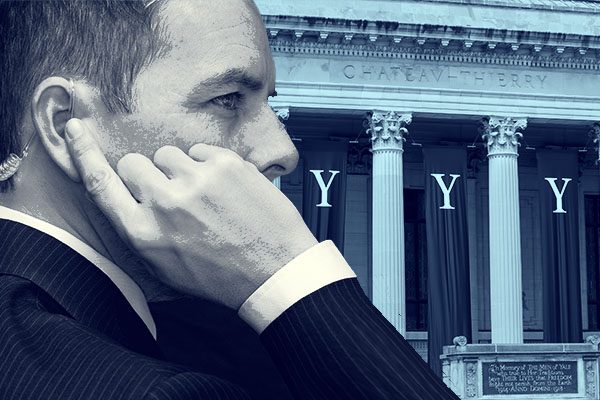 Yale University describes itself as a “community where people of diverse cultures and nationalities live, work, and play — connected by their similarities and enriched by their differences.” But what happens when members of that community live in fear of each other, as they are encouraged to monitor and anonymously report on their classmates?

When students began making their way back to campus after the COVID-19 pandemic forced an extended period of remote education, schools across the country faced difficult decisions on how best to limit the spread of the virus on campus. Seemingly determined to continue standing out for the worst possible reasons, Yale made the unfortunate choice to discard due process principles and basic notions of fundamental fairness by adopting a scheme to enforce the Yale Community Compact that relies on anonymous accusations of one’s peers.

Still in place today, Yale’s enforcement scheme violates basic due process principles. It deputizes students to serve as anonymous informants to enforce campus COVID-19 restrictions, thereby preventing accused students from knowing the identities of their accusers, and giving accused students just 24 hours to respond, even as they face potential removal from the university without a hearing. This week, FIRE sent a letter to Yale, urging the Ivy League institution to revise the Community Compact and related procedures.

The Yale Community Compact (which you can read in full here) requires students to follow all university COVID-19 guidelines and protocols. Intended to “promote the health and safety of all community members,” the compact outlines a variety of protocols, from vaccination and face covering requirements to agreeing not to host unauthorized persons on campus without advance permission. This is pretty standard among institutions attempting to return to in-person learning while balancing federal, state, and local health restrictions.

What’s not standard is Yale’s complete disregard for students’ due process, and its failure to consider what’s at stake for students subject to the enforcement scheme. If a student fails to meet the standards outlined in the compact, they “may have forfeited the privilege to continue to participate” for the rest of the academic year.

Yale’s procedures fail to provide accused students with even the most basic due process protections.

And yet Yale encourages students who have “concerns” about classmates’ behaviors to contact their school’s “Health and Safety Leader,” an administrator responsible for answering questions and initially responding to reports of compact violations, who holds discretion to issue a warning or refer the student to the school’s Compact Review Committee. That committee, a panel of three administrators, wields the authority to impose “a public health withdrawal or leave of absence.”

In practical terms, this means an accused student has no opportunity to know the identity of their anonymous accuser, let alone face them and ask questions in cases where credibility is of the utmost importance. In January, the Washington Free Beacon reported on Yale’s anonymous reporting system and the fear and confusion it has instilled on campus.

The Free Beacon’s report quotes a number of Yale students who were forced to navigate the procedures and were befuddled by the process:

“I have no clue who reported me,” one student, who was cited for going maskless outdoors, said. “The system has had a lot of success in keeping people scared.”

Others expressed concerns that the ability to anonymously report on classmates can too easily be abused to target students with unpopular views, and that reports will be “arbitrary” or “vindictive.”

Ultimately, one student said, the enforcement scheme has left campus feeling “like a surveillance state.”

Students are justified in fearing potential abuse and selective use to target specific individuals. Yale’s enforcement scheme lacks some of the most basic due process protections intended to protect all parties in the disciplinary process and instill confidence in the system, and it lacks these features in a setting where students are subject to potential withdrawal from the university.

From bad to worse?

Further complicating the situation is that after a matter is referred to the review committee, the accused student has just 24 hours to “provide the [review committee] with any relevant information.” This is the only opportunity the student will have to tell their side of the story. After that period expires, the review committee issues their determination and punishment. There is no hearing or any other opportunity for an accused student to engage with the panel of administrators before they determine the student’s future at Yale.

It is ludicrous to expect students to prepare a defense in just 24 hours when they are not even provided with information as simple as who accused them in the first place. Ultimately, it’s possible some complaints will be so light on information that a student may not even be able to identify the particular incident in question, let alone mount a full defense, within 24 hours.

“If college leadership is willing to muzzle, censor, and punish their own students and faculty members, the public should know.”

A single day is not nearly enough time for accused students to prepare a case. The Supreme Court, in the 1975 case of Goss v. Lopez, held that public school students facing even short suspensions of 10 days or less are entitled to notice of charges against them and the opportunity to present an argument to fact-finders, to tell their side of the story. The Supreme Court, notably, also held that matters involving longer suspensions or expulsion may require “yet more formal procedures.” Yale’s procedures fail to provide accused students with even the most basic due process protections discussed in Goss, while holding the potential for far greater consequences than a short suspension.

While Yale is a private institution and thus not bound by the constitutional guarantee of due process, courts have held that when a private university’s disciplinary proceeding lacks fundamental fairness, including inadequate notice of allegations, it may constitute breach of the institution’s contractual obligations.

As institutions across the country phase out COVID-19 restrictions, we should take time to reflect on the decisions universities made in the face of this crisis. It is crucial to learn from the mistakes to ensure they are not repeated in the future. Institutions must respect due process rights and establish a fair process that balances public health and safety with principles of fundamental fairness and long-established case law.

We urge Yale to reevaluate its Community Compact enforcement scheme and adopt public health procedures that respect its students’ due process rights, including the core rights of confronting one’s accuser and having adequate time to prepare a response to misconduct allegations.

If you’re concerned about due process on your campus, FIRE is here to help.