FIRE > Newsdesk > The Eternally Radical Idea > You can shout ‘fire’ in a burning theater: Part 5 of answers to bad arguments against free speech from Nadine Strossen and Greg Lukianoff

In May, I published a list of “Answers to 12 Bad Anti-Free Speech Arguments” with our friends over at Areo. The great Nadine Strossen — former president of the ACLU from 1991 to 2008, and one of the greatest experts on freedom of speech alive today — saw the series and offered to provide her own answers to some important misconceptions about freedom of speech. My answers, when applicable, appear below hers.

Assertion: But you can’t shout fire! in a crowded theatre.

Nadine Strossen: To the contrary, if the theater is on fire, you not only may shout “FIRE,” but indeed, you should do so! The constant misstatement of this famous line from a 1919 Supreme Court decision is significant, because it overlooks the critical, common-sense distinction between protected and unprotected speech. 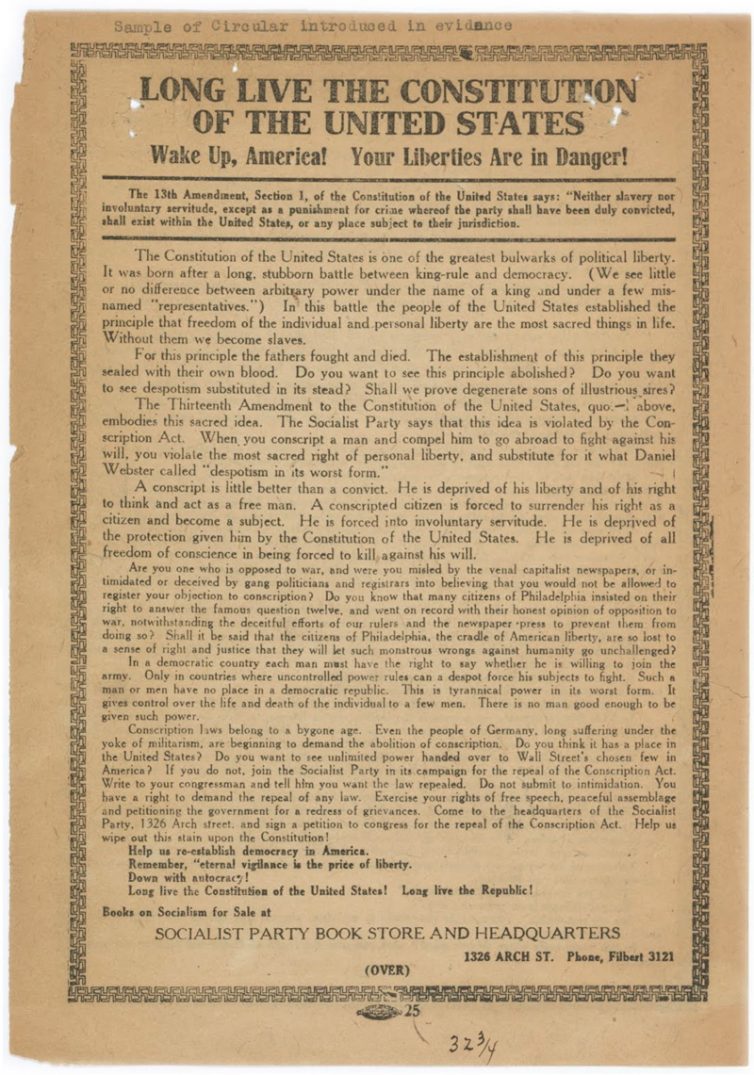 The pamphlet Charles Schenck was distributing that Holmes compared to a ''fire'': ''In a democratic country each man must have the right to say whether he is willing to join the army. Only in countries where uncontrolled power rules can a despot force his subjects to fight.'' (U.S. National Archives)
Back in 1919, the Supreme Court had not yet begun to meaningfully protect freedom of speech or other constitutional rights. Even today, though, while the Court strongly protects speech, it still allows government to restrict speech when it directly, imminently threatens serious harm — for example, to accurately quote the passage at issue, when someone “falsely shout[s] fire in a theatre and caus[es] a panic.” In stark contrast, when the speech instead helps to prevent such imminent serious harm — for example, when someone truthfully shouts fire in a theater and therefore prompts people to escape — the speech is protected.

This famous but regularly misstated and misunderstood example underscores a key factor in distinguishing protected from punishable speech: The speech must be considered in its overall context. Government usually may not restrict speech solely based on the speech’s content or message — for example, because its content is disapproved or vaguely feared.  Rather, government may restrict speech only when, under the circumstances, it directly threatens certain serious imminent harm, which can’t be averted through other measures.  For example, government may not punish hate speech solely based on its hateful content.  However, government may punish hate speech when, in the specific circumstances, it directly threatens serious imminent harm, such as intentionally inciting imminent violence that is likely to happen imminently.

Greg Lukianoff: Anyone who says “you can’t shout fire! in a crowded theatre” is showing that they don’t know much about the principles of free speech, or free speech law — or history.

That this trope originated as a justification for what has long since been deemed unconstitutional censorship reveals how useless it is as a measure of the limitations of rights.

This old canard, a favorite reference of censorship apologists, needs to be retired. It’s repeatedly and inappropriately used to justify speech limitations. People have been using this cliché as if it had some legal meaning, while First Amendment lawyers roll their eyes and point out that it is, in fact, as Alan Dershowitz puts it, “a caricature of logical argumentation.” Ken White has already penned a brilliant and thorough takedown of this misconception. Please read it before proclaiming that your least favorite language is analogous to shouting fire in a crowded theatre.

The phrase is a misquotation of an analogy made in a 1919 Supreme Court opinion that upheld the imprisonment of three people — a newspaper editor, a pamphlet publisher, and a public speaker — who argued that military conscription was wrong. The Court said that anti-war speech in wartime is like “falsely shouting fire in a theatre and causing a panic,” and it justified the ban with a dubious analogy to the longstanding principle that the First Amendment doesn’t protect speech that incites people to physical violence. But the Supreme Court abandoned the logic of that case more than 50 years ago. That this trope originated as a justification for what has long since been deemed unconstitutional censorship reveals how useless it is as a measure of the limitations of rights. And yet, the crowded theatre cliché endures, as if it were some venerable legal principle.

Oh, and notice that the Court’s objection was only to “falsely shouting fire!” If there is, in fact, a fire in a crowded theatre, please let everyone know.

UPDATE – January 5, 2022: For two more perspectives on the abuse of the “fire in a crowded theater” analogy, check out Jeff Kosseff’s January 4, 2022 piece, “America’s Favorite Flimsy Pretext for Limiting Free Speech,” and Trevor Timm’s November 2, 2012 piece, “It’s Time to Stop Using the ‘Fire in a Crowded Theater’ Quote,” both published in The Atlantic.