Last week, FIRE hosted a webinar where FIRE Executive Director Robert Shibley and I  summarized why we created the 2020 College Free Speech Rankings and some of its important findings. Our presentation was followed by a Q&A session. Because of time constraints we, unfortunately, were not able to address all of the questions that we received. This piece is the first in a series that answers a number of these questions.

Since some of the questions were very similar, I have grouped them broadly by topic. This post answers questions from three of these categories:

1) Practical questions about how to obtain a data file, how we plan to share these data with the colleges surveyed, or how a college could improve its ranking;

2) Conceptual questions about what constitutes a “good” score in our rankings, how we can distinguish between a general hostility to free speech on campus and administrative overreach, or why students enrolled at colleges not surveyed should care about these findings; and,

The next piece in this series will focus on questions about methodology and sampling.

The data file is available here. Once you provide your name and an email address, you will be able to explore the data in more depth. You will also be able to export the datafile and codebook by clicking the “Export” button located near the top left part of your screen above the list of the survey questions.

How do you plan to share these data with the colleges that you surveyed?

Our full report ranks all of the 55 colleges surveyed. For those interested in data from a specific school, we encourage you to use the “Explore the Data” feature available in the online dashboard. If you would like to perform more sophisticated analyses, you can download the datafile and codebook (see answer to previous question for information on how to download these files).

FIRE can also provide the toplines and crosstabs from a specific college, if a representative of that college makes such a request. This type of request would take a day or two to complete.

How can a college improve its ranking?

There is no single, definitive answer to this question, but I can offer some thoughts.

Recently in Reason, Ken White and Greg Lukianoff, FIRE’s president, debated whether free speech is best protected by the law or by establishing and maintaining a culture of free expression. Lukianoff argued that establishing and maintaining a culture of freedom of speech and expression is more important than legal protections such as the First Amendment. He defined a free speech culture in the following way:

Free speech culture means high tolerance for difference. It means a general presumption that, for most of us, our personal political opinions don’t matter all that much for our day-to-day jobs. That those with “terrible” opinions can still be amazing lawyers, artists, scientists, and accountants, and people with “good” opinions are not necessarily good at anything – indeed they may be a little too conventional to contribute interesting things to art, science, or social innovation.

The Lukianoff/White debate and Lukianoff’s argument about the importance of free speech culture are both relevant to answering this question. Even though a number of colleges have openly supported the principles of free speech, and made a concerted effort to ensure that their policies adhere to First Amendment law, it is clear they also have difficulty instilling the mindset Lukianoff describes. This point is not meant to discourage a clear and robust support of free speech by college administrators. On the contrary, one of the main reasons the University of Chicago performed so well in our rankings, relative to most of the other colleges surveyed, is because the administration makes their support for free speech and expression very clear and the students are well aware of the administration’s position. 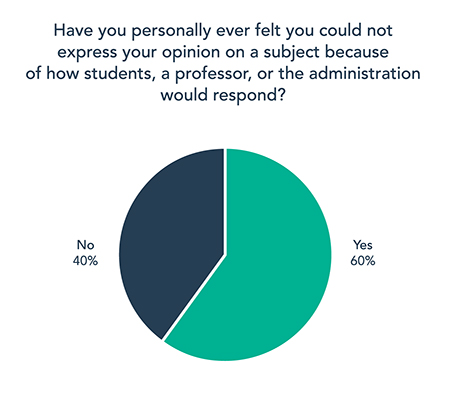 There are also good theoretical reasons to think that student tolerance and an ability to express one’s views openly and honestly are important factors in establishing a free speech culture on campus. Simply put, a more tolerant environment is likely to also be one where more people feel like they can openly and honestly express their opinions.

The University of Chicago, again, provides a good example. Its tolerance score and its self-expression score are both the highest of any college surveyed. On the other hand, Syracuse University (51st overall) has the lowest tolerance score and Dartmouth College (52nd overall) has one of the lowest self-expression scores. Unfortunately, identifying effective ways of increasing tolerance of different viewpoints, especially divergent political views, does not appear to be easy.

Finally, obtaining a green light rating would increase any college’s score. This is because a green light rating is the only one that adds points to a college’s score. A yellow light rating does not change a college’s score and a red light or warning rating results in a college losing points. In other words, working to ensure that official policies adhere to First Amendment law would likely lead to a college moving up in the rankings. This is a factor that administrators have a tremendous amount of control over and FIRE is more than willing to work with them to ensure their policies adhere to First Amendment law.

What do you consider to be a “good” score in your College Free Speech Rankings?

Right now, it appears that a score above 60 suggests that students believe that their college encourages free speech and expression. At the same time, most if not all of the schools that are ranked highly have dealt with their share of controversy over freedom of expression. Furthermore, at most of those schools, the number of controversial speakers whose appearance on campus was “supported” by a majority of the students surveyed did not exceed two (the University of Chicago was the lone exception with four, or 50% of the total). 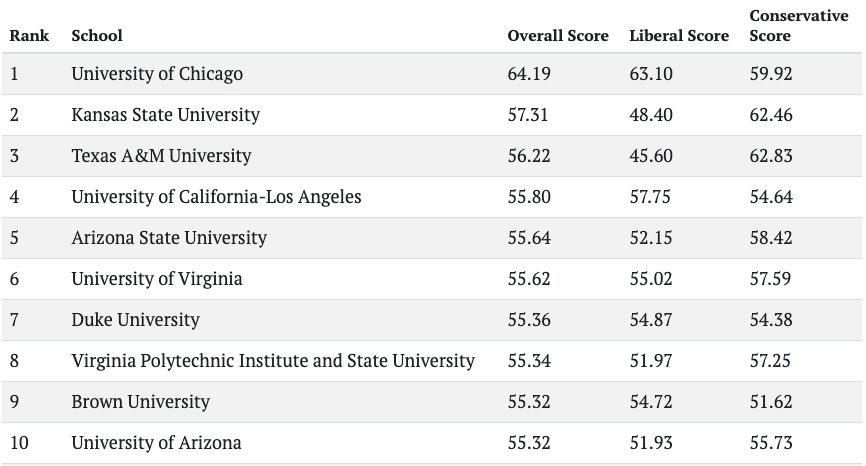 The top ten colleges for free speech according to FIRE's survey.

One important consideration is that although the maximum possible score is 100 and the minimum possible score is -1, it is doubtful that any college would ever obtain either of those scores. Furthermore, any determination of what a “good” score is would involve a degree of relativity as we would be comparing colleges to each other to make such a determination. Thus, additional administrations of the survey that include different colleges or more colleges would help us better determine what the true range of scores may be and also what a “good” score is.

Is it possible to distinguish between a general hostility to free speech on campus and administrative interference?

Our rankings are based on multiple factors and our inclusion of tolerance and the FIRE speech code ratings is an attempt to make this kind of differentiation. We assessed tolerance using a variation of the Stouffer method, a method also employed by the General Social Survey since its inception in 1972. Our variation entailed asking about different controversial speakers and expanding the response options to four from two. Attempts to measure tolerance on an individual level tend to conceptualize it as a variable that is predictive of support or hostility towards free speech and expression.

The items that assessed the acceptability of different forms of protest may also provide an indication of a general hostility towards freedom of speech. For instance, fewer than 40% of the college students we surveyed believe it is “never acceptable” to shout down a speaker on campus, which would be an example of general hostility to freedom of speech.

The FIRE speech code ratings, on the other hand, provide an indication of a college’s policies and can be used to identify which campuses have a greater potential for arbitrary administrative interference occurring during a controversy over freedom of speech.

If a student attends a college that wasn’t surveyed, why should they care about these findings?

Even though there is tremendous value in analyzing student attitudes about free speech on individual campuses, our data demonstrate that there are some elements that are fairly common among students across the country. For instance, a majority of students on every campus were uncomfortable sharing unpopular views on social media. At almost every campus surveyed, abortion and race consistently emerged as topics that students found difficult to discuss on campuses across the country.

All of these findings suggest that current controversies over freedom of speech on campus may be part of a broader cultural phenomenon regarding attitudes towards freedom of speech, censorship, and self-censorship.

Ideally, any future administrations of this survey will expand the number of schools surveyed. Like the General Social Survey, we would likely maintain some questions from previous administrations but also introduce new ones.

Are you interested in surveying other populations relevant to the issue of free speech on campus (e.g., administrators, faculty, and parents)?

Yes, we are interested in other non-student populations that have a stake in whether campuses are places where students and faculty feel free to express their opinions on complex and, often, controversial topics deemed relevant and important to society.

We are currently investigating the possibility of surveying college faculty members. There are three reasons we are prioritizing obtaining a sample from this population. First, FIRE just completed its busiest summer ever, where a number of faculty members faced calls for sanction and termination. Second, there is a growing body of peer-reviewed research documenting the willingness of faculty to discriminate against colleagues who do not share their beliefs, and that faculty members have elected to not pursue certain lines of inquiry in their research because they fear social sanction from their colleagues. Third and finally, one report out of the United Kingdom and another from the University of Southern California reveal that a notable portion of the faculty surveyed believe academic freedom is currently facing serious threats from within the academy itself.

In the next followup to the Q&A session of our webinar on our 2020 College Free Speech Rankings, I’ll tackle questions about our methodology and sampling strategy.