Editor’s note: We are excited to announce the new FIRE-supported podcast Clear and Present Danger: A History of Free Speech. The podcast is a project of FIRE Visiting Fellow Jacob Mchangama. Today, Jacob released the prologue to his podcast history, which officially begins next Thursday with a stop at ancient Athens. We hope you will subscribe to Clear and Present Danger and join Jacob as he explores free speech’s rich history in the coming months. Below is a post from Jacob on why he decided to pursue this project.

Free speech is all the rage. A quick LexisNexis search returns 1,096 hits on “free speech” in newspapers for the first three weeks of 2018 alone. Most people around the world — 56% to be precise — agree that free speech is “very important.” That goes for 71 percent of Americans and 43 percent of people in the Middle East. But when it comes to why free speech matters and what it entails agreement quickly evaporates.

Since 2004, global respect for press freedom has been in constant decline. In recent years, this even includes the open democracies of the world. And while citizens of democracies continue to support free speech, few seem willing to defend free speech on principle. Often they’ll advance this freedom when it supports their underlying sympathies only to “but” out when used by their ideological opponents.

One camp may insist that “snowflakes” have to learn to put up with offensive comments only to support calls to rein in the “fake news media.” Others will exercise their free speech to protest loudly at perceived and systemic injustices only to insist that expressions deemed offensive to specific groups be censored by the very system they protest.

This pattern of selective outrage and free speech “butism” repeats itself whenever new battlegrounds over free speech emerge — at universities, over hate speech, on social media, and surrounding fake news, to name but a few current controversies. Free speech has gone tribal.

Moreover, too often the arguments advanced for or against free speech are couched in abstract terms and based on assumptions rarely put to any test but simply asserted as a matter of fact or dogma. This includes some of the most tired memes of free speech discussions. 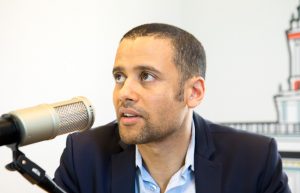 Free speech defenders will self-righteously exclaim, “I disapprove of what you say, but I will defend to the death your right to say it,” thinking they’ve just quoted Voltaire, when really it was the words of his 20th century biographer Beatrice Evelyn Hall.

Those in favor of restrictions will “remind” everyone that free speech doesn’t include the right to “shout fire in a crowded theater,” oblivious to the fact that they’re quoting a line from former Supreme Court Justice Oliver Wendell Holmes used to justify the conviction of socialists for opposing the draft through pamphleteering.

If free speech really is so important, we owe it to ourselves to gain a fuller understanding of where, when, and how this principle developed. If nothing else, then to give ourselves the necessary historical context to escape the narrow-minded tribalism and opportunism that fuels so much discussion on free speech.

Clear and Present Danger: A History of Free Speech is an attempt at that.

Why have kings, emperors, and governments killed and imprisoned people to shut them up? And why have countless people risked death and imprisonment to express their beliefs? What role has free speech played in the struggles for the values that define the aspirations of modern democracies: full suffrage, equality of the sexes, and the emancipation and empowerment of minorities?

I hope you will join me on this journey from the trial of Socrates to the Great Chinese Firewall.

Next Thursday, Feb. 1, we will post the first episode of our history. After that, new episodes will become available every other Thursday.

Email us feedback at freespeechhistory@gmail.com.