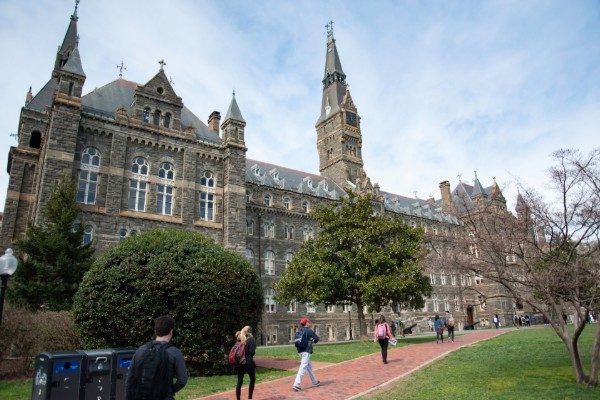 FIRE reported Monday that hecklers successfully shut down a speech by Acting Secretary of Homeland Security Kevin McAleenan at Georgetown Law. But this wasn’t the first attempt by Georgetown students to shut down a controversial speaker in recent weeks.

Protesters similarly interfered with a Sept. 19 address by Marc Morano, who is the outspoken author of the book “The Politically Incorrect Guide to Climate Change.”

Morano spoke as part of “Climate Forum: A Rebuttal,” an event hosted by the Georgetown University College Republicans as an alternative to “Climate Forum 2020,” an event held at Georgetown on Sept. 19-20 during which 2020 presidential candidates — mostly Democrats — discussed and debated environmental policy. Morano was the first of five speakers slated to present that evening.

But even before Morano began his address, a student rose to offer an alternative introduction, noting points of criticism about Morano’s career.

While FIRE has long argued that brief interruptions such as this are protected speech so long as the event is allowed to proceed, this brief interruption was just one of many that appeared to be a part of a concerted effort to silence Morano and other presenters.

As seen in a video of the event, Morano’s speech faces repeated extended interruptions in its first eight minutes.

Perhaps most notably, a student enters late wearing a full clown costume (around minute 5:20) — giant bowtie, red nose, and silly horn included — apologizing for being tardy to “the clown convention” and receiving cheers of support from fellow protesters. This class clown proceeds to honk his horn more than 25 times between his arrival and when campus police show up six minutes later.

When police officers enter, they first ask the hecklers to leave. When those who interrupted Morano refuse to step into the hall, the officers eventually order all the attendees to leave the room.

According to The Hoya, Georgetown’s student newspaper, the event resumed after a 15 minute recess. Students were allowed to reenter the classroom provided they did not bring any signs and consented to a bag check. Students also received a warning that anyone who caused further disruption would be removed; at least one disrupter was asked to leave after this warning, The Hoya reported.

As we noted earlier this week, while Georgetown is a private Catholic institution not bound by the First Amendment, its own free expression policy requires those wishing to protest campus events to abstain from violating the “speaker’s right to free speech and the audience’s right to see and hear the speaker.”

Of course, many campus protests are not illiberal, as protests are often great illustrations of the First Amendment right to engage in counter-speech. For example, other students engaged in peaceful, non-disruptive protest during the climate event. They gathered outside the classroom where the event took place, holding up signs offering counterpoints to Morano’s message in a manner that did not disrupt the speech itself.

The lack of wisdom in the hecklers’ actions has nothing to do with the climate change debate. It’s about how debates about controversial issues are best conducted on campus.

When hecklers deny speakers the ability to give their presentations, it injures the marketplace of ideas in three ways. First, it denies the speaker the opportunity to share his ideas. Second, it denies those who wish to hear the speaker the right to listen. Third, it undermines the ability of those who disagree to fully understand the perspective of the speaker and thus formulate informed counter-arguments, preventing the informed debate that fuels the marketplace of ideas.

In short, when controversial speakers are shouted down, everyone loses.