At Babson College, the climate of freedom of expression feels like 2003 all over again. Today, the college announced its completion of a “thorough investigation” — which started yesterday — into an adjunct professor’s Facebook post. As a result of its investigation, the college has terminated the professor.

The professor’s post was a response to President Trump’s tweeted threat to target 52 Iranian sites, including cultural sites — a threat that drew criticism and eventual disavowal following commentary that the threat, if carried out, would constitute a war crime. Asheen Phansey, an adjunct professor and staff member at Babson College, posted on his personal Facebook page: 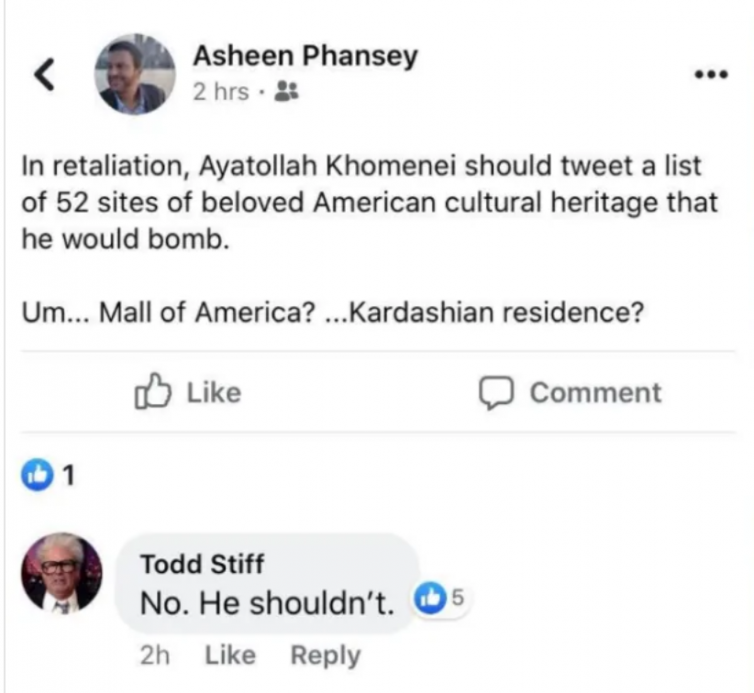 That drew the attention of a local gossip blog, which published screenshots of Phansey’s post, leading to critics on Twitter to call on the college to take action:

It strains credulity to read Phansey’s post as sincerely advocating violence. In political rhetoric, figurative and hyperbolic language have been familiar tools for centuries, and Phansey’s post is quite obviously a criticism — not endorsement — of threats of violence, mixed with snark about American culture.

For argument’s sake, even after stripping Phansey’s post of its obvious intent, it still does not amount to unprotected speech. As we explained in a letter FIRE sent to Babson president Stephen Spinelli this afternoon, Phansey’s post simply cannot be characterized as either a “true threat” or “incitement,” which are not considered protected speech:

First, because the statement does not purport to commit Phansey to any action, it cannot amount to “a serious expression of an intent to commit an act of unlawful violence[.]” Virginia v. Black, 538 U.S. at 359. Second, the “particular . . . group of individuals” identified in Phansey’s post—the Kardashians and Mall of America—reveal the sardonic tone, depriving the post of the “serious” nature necessary to remove it from its default status as protected speech.

Second, Phansey’s post is better analyzed under the incitement standard, as it (if read literally, and deprived of its context) purports to call upon Iran to issue a threat to attack particular American cultural institutions in response to President Trump’s threat. Yet even if the post had sincerely encouraged Iran to attack the United States, “mere advocacy of the use of force or violence does not remove speech from the protection of the First Amendment.” Claiborne Hardware Co., 458 U.S. at 927 (emphasis in original). To amount to incitement, the speech would not only advocate unlawful force, but must also be “likely to incite or produce” imminent lawless action. Brandenburg, 395 U.S. at 447. Simply put, there is no reasonable likelihood that Phansey’s private post to his Facebook friends would lead to Iran threatening to bomb the Kardashians’ residence.

And while Babson College is a private institution, and thus not bound by the First Amendment, it does promise its faculty and students that Babson College will respect their freedom of expression. We know that from its faculty handbook, which adopts the AAUP’s 1940 Statement of Principles, under which extramural statements such as these are insufficient to justify terminating faculty members. We also know it from other statements in its student policies, on its website, and from our experience in defending conservative students who faced punishment for celebrating Trump’s 2016 election. In that case, Babson ultimately protected freedom of expression. But not this time.

While some might prefer that faculty and students speak only in sober, considered tones, freedom of expression embraces “the right to criticize public men and measures—and that means not only informed and responsible criticism, but the freedom to speak foolishly and without moderation.” It certainly embraces a right to criticize our President.

Babson’s process-free departure from its stated commitments threatens to do far more damage to its reputation than a momentary social media storm ever could. To save its good name, the college should reinstate Phansey immediately.