In our book The Coddling of the American Mind, Jon Haidt and I argue that major changes started happening on campus in 2013, when Generation Z reached college for the first time. While some of the norms they brought with them were positive, including less apathy about social issues and a greater willingness to talk about mental health, the downside was a much lower tolerance for speech and speakers that they found offensive.

Some of the most problematic ideas we’ve seen from this shift are that speech is akin to violence; that speech can be deeply mentally harmful, even when it’s just the expression of opinion; that de-platforming is a moral necessity; and that some opinions are like viruses and need to be stamped out, lest they infect the entire population.

I’m not 100% sure if the advocates of Bennet’s resignation know what kind of future they create.

These graduates and, therefore, ideas began reaching the workplace a couple years back, and Haidt and I constantly hear from employers about the clash (almost always in confidence) it creates within organizations. The recent resignation of James Bennet from the editorial page of The New York Times will be among the milestones remembered as a symbol that new norms are hitting the “real world,” and that’s not a great thing, either for stemming polarization or for freedom of speech.

For any of you who don’t know, on June 7, following an outcry from both inside and outside The New York Times, James Bennet resigned from his post as opinion editor. The complaints followed the Times’ decision to run an editorial by Senator Tom Cotton advocating for the use of the military to stop opportunistic violence taking place alongside anti-police brutality protests. Bennet’s resignation is important for many reasons, not the least of which was that Bennet was hired, quite consciously, to address criticisms that The New York Times had become a sort of self-confirmatory, liberal bubble.

It was Bennet’s job to shake things up, as he had done at The Atlantic, by introducing provocative points of view from all over the spectrum. His resignation for doing precisely that is a stern message to all future editors to stay in their lane, and an unfortunate encouragement to people within Generation Z and outside of it to look for any opportunity to cancel their ideological opponents.

The critics of the article should have focused like a laser on Sen. Cotton and his argument, not on James Bennet

Before we go a single inch deeper, here is the divide between Generation Z’s values and those of old college newspaper folk like me: The outrage about the substance of Sen. Cotton’s opinion should have been directed at him and his argument, not on the decision of an editor to provoke and challenge his reading audience.

To those of us who come from a journalism background, or a First Amendment background, or are concerned about political polarization, we think it is a very good thing for editors to challenge their readers. That includes exposing readers to opinions they would not know, even if it means inviting their readers’ ideological opponents to plead their case as well as they can. I’m not 100% sure if the advocates of Bennet’s resignation know what kind of future they create by turning away from this principle.

The champions of Bennet’s resignation and what they got wrong, as seen through tweets 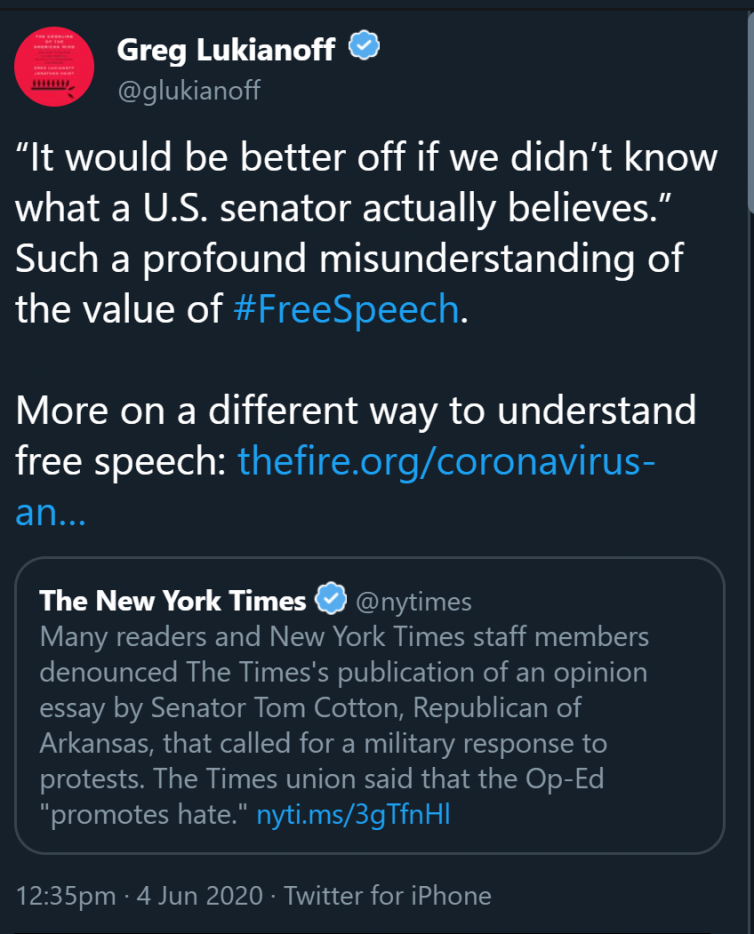 I, of course, tweeted about the controversy and the response to my tweet provides a pretty good microcosm of the larger argument.

Since some people misunderstood my point, here it is: People who seek to silence opinions they don’t like are implicitly saying that they don’t want to know what other people think. I’m also saying that knowing what people think is important, particularly when the speaker:

All three were present here.

As to point number three, publishing this opinion in The New York Times, rather than, say, the Washington Times, made it far less likely that the outcome Sen. Cotton sought would happen.

Consigning a policy opinion you don’t like to an echo chamber is a bad idea when that echo chamber includes 52% of the public, a majority of the Senate, and the President of the United States.

The “his opinion is not worthy” response

The primary argument seems to go like this: Because The New York Times is under no obligation to publish something by Sen. Cotton, they shouldn’t have done so.

The New York Times has published op-eds from Quaddafi, Putin, Ergodan, and the Taliban.

That assumption functions as an elitist, “virus” theory of freedom of speech: Some arguments are so dangerous that they will “infect” the public, as if the public were helpless pawns. It paints Times readers as lacking in autonomy and intelligence — except, of course, for the person advancing the theory, who presumably assumes: “Well, of course I won’t be the one infected by this opinion, because I know it’s morally incorrect.”

A slight variation of this theme is to claim that Sen. Cotton’s opinion is factually incorrect because it makes comparisons to 1960s unrest or suggests some violence is performed by “left-wing radicals.” The former boils down to a difference of opinion that is not a factual dispute; the latter is setting a threshold of proof so high that it couldn’t be met until the day Antifa issues membership cards.

I trust in people’s ability to see a retrograde argument and reject it rather than being told in advance by the staff of The New York Times that they must not consider it.

(And yes, I couldn’t disagree with Sen. Cotton’s prescription more, but that is — and should be — irrelevant to my support of Bennet’s decision to run his piece.)

The “he has a big enough platform already” response

Standing behind the “this idea must never be expressed” group is this one: “Well, he’s a Senator, he doesn’t need to be amplified by a newspaper.”

Whether it’s true that a Senator’s prominence is a replacement for publishing his opinion in his own words is a debatable idea to begin with; there’s a lot commanding our attention right now.

Some people insisted the Times shouldn’t have published the opinion because Sen. Cotton had tweeted his views. That most of us didn’t read his tweet at the time is itself evidence that random tweets are not a substitute for op-eds. If anything, the tweet raised more questions than it answered, highlighting the need for a longer explanation of Sen. Cotton’s position.

Those outraged at Sen. Cotton’s opinions are benefiting from the Times’ decision to present that opinion in unvarnished form. If the Times wrote a news story about Sen. Cotton’s statement, the neutral treatment would sanitize his opinion’s most troubling implications; had they editorialized instead, his supporters would have pointed to out-of-context quotes and blamed “The Media” for distorting his message. Giving Sen. Cotton the chance to present his position in his own words was the best way to reveal its weakness.

In Sen. Cotton’s case, that weakness was highlighted by a responding op-ed written in the Washington Post, signed by 89 former Defense Department officials, who said that deploying the actual military is an option way, way down on the list of options from where the nation was and always should be. I am skeptical that such a response would have followed if Sen. Cotton’s opinion had stayed in a conservative echo chamber, or had been left as a tweet.

The “imprimatur of the Times” argument

The least well-considered argument is that, somehow, publication in The New York Times constitutes an endorsement of the Senator’s ideas. It does not. The New York Times has published op-eds from Quaddafi, Putin, Ergodan, and the Taliban. It did not endorse any of their opinions — it recognized it was important for us to understand what their opinions were. Nobody is, or at least, should be confused about this.

Full disclosure: I have tremendous respect for James Bennet. He was the editor who greenlighted my and Haidt’s original piece, also titled The Coddling of the American Mind, in 2015.

At the time, The Atlantic was my absolute top choice for a place to publish, in no small part because of James Bennet’s commitment to making the magazine into an exciting intellectual space where people could make arguments across the political spectrum, even some that might be considered “dangerous” by other publications.

This success at The Atlantic is why he was hired by The New York Times in the first place. And then he was given what turned out to be an impossible job: Make The New York Times more diverse in terms of its published viewpoints, and more willing to challenge its readers with opinions they might never have thought of, or even hate.

James Bennet did a good job trying to challenge The New York Times readers with important things they might prefer not to know, and invited unpopular people to make their best argument in front of their huge audience. And, ultimately, that’s what got him fired.