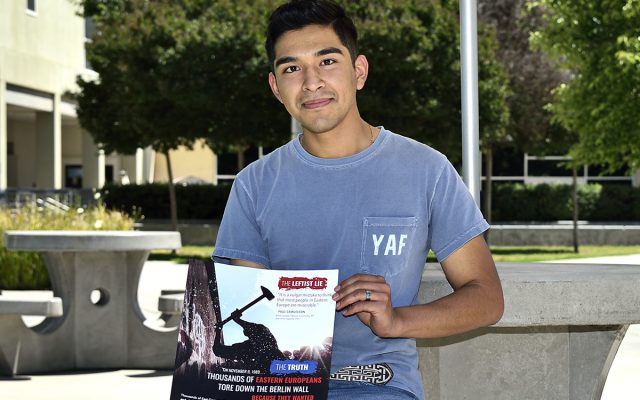 Plaintiffs Alejandro Flores, Daniel Flores, and Juliette Colunga are students at Clovis Community College and founding members of the college’s chapter of Young Americans for Freedom (YAF-Clovis), a conservative student group. To spread their message and attract new members, Alejandro, Daniel, and Juliette — like many other students — post flyers in the hallways their peers walk through every day on their way to and from class. In November 2021, YAF-Clovis obtained the college’s permission to post flyers criticizing communist regimes on indoor bulletin boards. However, after administrators received a complaint that the flyers’ content made “several people . . . uncomfortable,” Clovis President Lori Bennett ordered her staff to pull the flyers down.

Clovis maintains a policy banning flyers with “inappropriate or offens[ive] language or themes,” under which Clovis administrators suggested they should have rejected YAF-Clovis’s posters in the first place. But President Bennett invented an excuse to make it seem like her decision had not been based on the students’ viewpoint. When YAF-Clovis later asked to post pro-life flyers on the day the Supreme Court heard oral argument in Dobbs v. Jackson Women’s Health Organization, Clovis administrators used President Bennett’s excuse to banish the group’s flyers from the highly trafficked hallways to a small, outdoor “free speech kiosk,” on a remote part of campus students rarely visit.

Clovis’ Flyer Policy is an unconstitutional prior restraint on student speech that discriminates based on viewpoint and gives administrators unbridled discretion to prohibit all kinds of protected expression from a forum the school has created for student speech. Clovis administrators discriminated against Alejandro, Daniel, and Juliette’s viewpoints in violation of their clearly established First Amendment rights.

On August 11, 2022, the students of YAF-Clovis—represented by FIRE—sued Clovis Community College officials to challenge the banning of their flyers from indoor bulletin boards and strike down the unconstitutional posting policy. With this lawsuit, Alejandro, Daniel, and Juliette hope to stand up for students’ rights to freely express their political viewpoints at public colleges.

Lori Bennett’s Email Ordering The Flyers To Be Taken Down

Emails Between Clovis Administrators RE: Poster