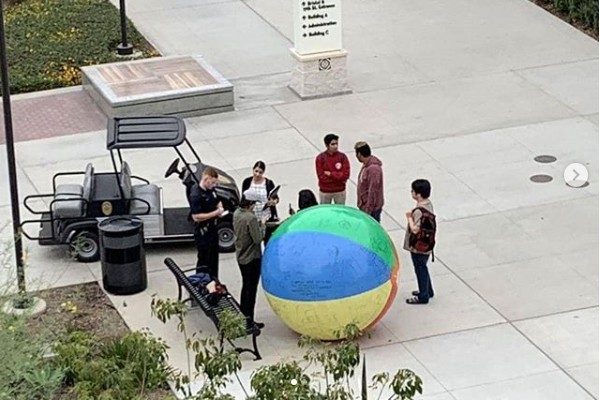 In November 2018, student leaders of the Santa Ana College chapter of Young Americans for Liberty set up a “free speech ball” on campus, inviting passing students to write messages of their choice on the oversized beach ball and talking to them about civil liberties. About an hour into their event, a campus administrator and police demanded they deflate the ball, pointing out offensive messages and drawings scrawled on it by other students.

Several days later, the student leaders found themselves charged with multiple violations of the Standards of Student Conduct of the Rancho Santiago Community College District (of which Santa Ana College is a member). They faced potential discipline for violating provisions of the code banning “obscene” expression, “vulgarity,” and “hate speech.”

After a quick intervention by FIRE, the charges against the students were dropped, but the students didn’t stop there. Represented by FIRE, the student organization pressed and continued to press for permanent revisions to the student conduct code, demanding the removal of unconstitutional restrictions on student speech.

Almost a year to the day after Santa Ana College charged the students, the district formally revised its student conduct code to bring it in line with the First Amendment, securing a lasting victory for the expressive rights of all 50,000 students within the district.