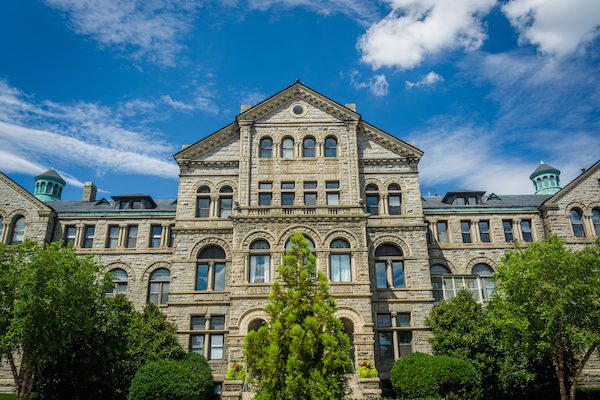 This April Fools’ Day, the only one not in on the joke is Catholic University of America, which launched an investigation of a student for memes he posted on his Instagram account criticizing the university’s chapter of Young Americans for Freedom.

On March 23, the university’s YAF chapter posted on its Instagram account a picture of transgender collegiate swimmer Lia Thomas, who has faced criticism for competing against women. The picture included the added text, “Change my mind,” and “Save women’s sports.”

CUA student Rory O’Connor objected to YAF’s post, and made his opinion known, posting on his Instagram story numerous popular memes, which he edited to criticize YAF. One Instagram story, featuring a meme from the children’s cartoon “Arthur,” seems to have particularly irked YAF, causing the group to file a complaint and prompting CUA to investigate.

On March 29, CUA told O’Connor he was being charged with violating the student code of conduct for engaging in “disorderly conduct,” based solely on the posts. The charge included a screenshot of O’Connor’s “Arthur” meme.

FIRE wrote CUA today explaining that because the university promises students expressive rights, it may not punish or investigate O’Connor for his satirical posts. As we explained to CUA, O’Connor’s posts are protected satire:

As important — indeed, vital — components of political speech, parody and satire lie at the core of our country’s honored traditions. Expression that relies on satire — such as O’Connor’s posts — exists to challenge, to amuse, to provoke, to educate, and, indeed, sometimes to offend. The landmark United States Supreme Court cases Cohen v. California and Hustler Magazine, Inc. v. Jerry Falwell, collectively illustrate reasons for protecting even highly offensive material, farce, profanity, and exaggeration. Here, O’Connor used one of his generation’s preferred methods of satire — memes — to criticize YAF’s opinions on transgender athletes. To punish O’Connor for this political criticism would run counter to one of the fundamental purposes of freedom of speech.

Taken in context, O’Connor’s post does not meet the exacting standards to constitute harassment or a true threat. YAF has opened itself up to criticism by publicly commenting on a controversial political issue by asking students to “Change my mind.” O’Connor’s post is not a “serious expression of an intent to commit an act of unlawful violence,” which is necessary to be a true threat.

O’Connor’s post was satire, the opposite of serious — it asked YAF if it wanted to “keep [its] kneecaps” in the context of a well-known internet meme featuring a cartoon bear speaking with an animated aardvark. Importantly, the post at issue followed other posts criticizing YAF’s views on transgender athletes, and it was clear O’Connor was simply stating his intention to continue that criticism. Nobody in YAF could reasonably interpret the post as a serious expression of an intent to commit violence against them. The post amounts to no more than a satirical joke protected by CUA’s free expression promises.

Even if CUA finds O’Connor not responsible for the alleged misconduct, its investigation alone is impermissible to the extent it creates a chilling effect on other students who might want to discuss these issues without fearing punishment.  Given that the CUA code of conduct includes significant sanctions, including the possibility of suspension or expulsion, CUA’s investigation sends the message to O’Connor and other students that they may be punished for their protected speech. When faced with complaints about protected expression, universities like CUA need only preliminarily review the complaint to confirm the speech is protected and summarily dismiss the complaint. It’s that simple.

The university’s actions conflict with both its promises of free expression and its informal “no cancellation” policy that it boasted about just four months ago. Now that CUA’s in on the joke, ​​it must immediately cease investigating O’Connor and confirm he won’t be disciplined.