FIRE > Newsdesk > Consent at Coastal Carolina Must Be Enthusiastic, Sober

According to Coastal Carolina University, sex is only consensual if both parties are completely sober and if consent is not only present, but also enthusiastic. This is a troubling standard that converts many ordinary, lawful sexual encounters into sexual assault, and it should frighten any student at CCU.

The controversy began recently when Reddit and Twitter users seized upon the troubling implications of this CCU poster. It describes a situation—two drunk students having sex—that is presumably common on many college campuses. “Jake” and “Josie” are, quite literally, the poster children for college hookups. Many people rightly asked, therefore, why the poster branded the male student a rapist when the female student had done exactly the same thing he had—have sex with someone who was drunk. As FIRE has explained to other schools, such as Duke University, turning mutually consensual sex into rape is both dangerous and unhelpful—the touchstone should be incapacitation, not mere intoxication. To its credit, Duke recognized this oversight and adjusted its policy.

FIRE reached out to CCU to verify the poster’s authenticity, and we received the following response:

The poster referenced in your email was created and distributed on our campus approximately 8 years ago and was very short lived – long before other campuses our size were having in-depth discussions regarding consent. Since that time, the conversation with our students about sexual consent has changed dramatically. Currently, educational initiatives regarding consent on the Coastal Carolina University campus include extensive online and in-person education.

CCU was kind enough to provide us with its new, improved poster: 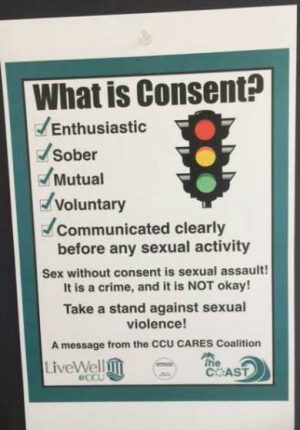 As you can see, CCU may say the conversation has changed, but the concerns are much the same.

CCU’s new poster is an attempt to educate students on so-called “affirmative consent.” While no one argues with the notion that consent is required for sex, affirmative consent rules add a layer of confusion and bureaucracy, effectively forcing accused students to prove their innocence in a situation where there are typically no witnesses and no documentation.

FIRE has already spilled much ink discussing the problems with affirmative consent standards. CCU’s standard, however, is even more troubling than most for two main reasons:

One might think that simply receiving an affirmative response to a sexual entreaty would be sufficient, but according to CCU, the consent must be “enthusiastic.” This makes it virtually impossible for students at CCU to know if the consent they have received is sufficient to satisfy the university. If you heard “okay,” or “sure,” have you received consent? Or must your advances be so irresistible that you hear nothing short of “Yes! You are so amazing; take me here and now!” Are you willing to stake your academic and professional future on the answer to that question?

Sobriety: Lips That Touch Liquor Shall Not Touch Ours

It is a bit disingenuous for colleges to tacitly accept their drinking culture, then punish the foreseeable consequences of that culture. CCU’s alcohol policy is even more confused than most schools’, given that in 2013, the university tried to prevent a local paper from reporting on alcohol use on its campus.

Unlike what CCU or anyone else says, drunk sex is not unlawful—incapacitated sex is. Conflating intoxication with incapacitation is inaccurate and misleading, and it undermines legitimate efforts to stop rape. The use of vague standards, as presented in the new poster, is the consequence of the current moral panic gripping our college campuses.

Because of the gross misstatements of law presented by the posters, FIRE’s sober assessment is that we are less than enthusiastic about them.