Last September, FIRE asked, rhetorically, whether DePaul University was “America’s worst school for free speech.” This month, DePaul has responded with the policy equivalent of “hold my beer.”

Last Wednesday, DePaul disinvited Gavin McInnes, a writer and comedian who — long after co-founding Vice Media — founded the pro-Trump, anti-antifa “Proud Boys” movement, because of what DePaul’s president described as “the encouragement of violence.” Then, on Monday, DePaul extended through the end of the academic year a temporary policy it had put into place last fall that requires prior approval of invited speakers by a review board of students, staff, and faculty.

McInnes, invited by the DePaul College Republicans last fall (presumably before the review board existed), had been scheduled to speak on May 30. In a statement to the university community, DePaul President Rev. Dennis H. Holtschneider wrote that the disinvitation was made because McInnes had made statements about violence:

After clashes outside his February event at New York University, McInnes told his followers: “We’re the only ones fighting these guys and I want you to fight them, too. It’s fun. When they go low, go lower. Mace them back, throw bricks at their head. Let’s destroy them. We’ve been doing it a while now and I gotta say, it’s really invigorating. Even when you lose, you feel great about yourself…”

DePaul University works to ensure that student organizations can host speakers and events of their choosing. The encouragement of violence, however, has no place here.

DePaul also noted that the Proud Boys recently started a paramilitary arm called the Fraternal Order of Alt-Knights. Holtschneider cited the establishment of a Proud Boys “military division” as another reason not to permit McInnes to speak on campus.

The DePaul College Republicans responded in a Facebook post, disagreeing with the university’s characterization of McInnes’ comments:

In a letter to the student body announcing their decision, the University refuses to recognize the broader political issues surrounding Gavin’s cause. In arguing that he supposedly endorsed violence, DePaul fails to acknowledge the threats surrounding that situation; indeed, rather than a call for violence, they were calls for self-defense.

On Friday, McInnes posted a blog justifying the creation of the Alt-Knights by indirectly referencing DePaul’s own dubious history of defending campus speakers.

In May of 2016, protesters at DePaul shut down a Milo Yiannopoulos speaking engagement, and a Huffington Post contributor at the event wrote that campus police were ordered to “stand down” when protesters rushed the stage. After directly mentioning the physical opposition Charles Murray experienced at Middlebury College, and indirectly mentioning events that sound like protests that took place at the University of California, Berkeley, McInnes referenced police being told to stand down.

The school’s president doesn’t seem to understand the state of free speech. We are being attacked and pepper-sprayed. They are burning down schools and threatening our lives. Charles Murray had to be smuggled out and a professor next to him was knocked unconscious.

On top of all this thuggery, police at these talks are being told to stand down. We’re left with no choice but to build our own armies in self defense.

Whether or not DePaul administrators actually told police to stand down, DePaul forced the College Republicans to hire security guards for the Yiannopoulos speech; the same guards then failed to prevent protesters from shutting down the event, taking the microphone away from Yiannopoulos and pushing it into his face.

DePaul could likely prohibit the Proud Boys from attending McInnes’ speech (or at least require licensed, professional security guards to do the job of actually securing the event); a politically-oriented paramilitary with a commitment to escalating violence is like a puddle of gasoline waiting for a spark.

But that’s not the situation here. Instead, DePaul is banning a speaker for having expressed the idea that self-defense for his ideological allies may be necessary, at some point, somewhere. And McInnes is saying that part of the reason he feels threatened is that DePaul demonstrated, in the Yiannopoulos incident, its willingness to let speakers of a certain ideology get assaulted.

The university may avoid the next disinvitation issue proactively — by never scheduling the talk in the first place. According to the student paper The DePaulia, the university has extended its policy of vetting speakers. The DePaulia reports that student organizations seeking to bring in an off-campus speaker must submit their name for review at least a month in advance; the student, faculty, and staff board then will assess the “speaker’s potential for violence.” According to the report, only student groups are subject to the policy; faculty and administrators extending invitations are exempt.

In March, we published an interactive presentation detailing a decade of censorship at DePaul. And if you want to go back further than that, here’s a blurb from the front page of the January 15, 1988 edition of The DePaulia: 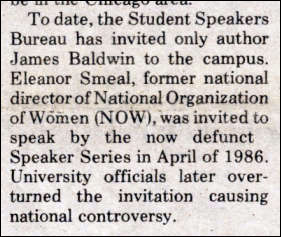 FIRE will continue to watch the situation and provide updates as DePaul digs the hole it’s in deeper and deeper.