“At Brown, there is an underground group whose purpose is to allow kids to say what they ought to be free to say above ground.”

So begins Jay Nordlinger’s National Review profile of Reason@Brown. Christopher Robotham, 21, is the group’s founder. He tells FIRE that the by-invitation-only club is a forum where Brown students can engage in free expression in an atmosphere where open and vigorous debate is welcome and valued.

I talked to Robotham, a computer science and math major, about why he started Reason@Brown, what to make of the campus “safe space” crisis, and where we go from here.

Some questions and answers have been edited for length and clarity.

FIRE: What got you interested in free speech issues, and why did you start Reason@Brown?

ROBOTHAM: The big thing was the shout down of the Ray Kelly event at Brown in the Fall of 2013. That was about a year before I started Reason@Brown, and that sort of sowed the seeds of this consciousness in the minds of myself and many other people.

About a year after that, there was a debate on sexual assault policy on college campuses. The radical left activists on campus were so unhappy that one of the speakers, Wendy McElroy, didn’t believe in the notion of rape culture—which is also a notion that the primary sexual assault advocacy group in the United States does not subscribe to—that they considered her being on campus to be an act of violence.

President Paxson of Brown University, rather than saying, “This is a foolish thing to say. This debate will go on. If you’re not interested in opposing views, then perhaps a college campus is not an ideal environment for you,” sent out this really capitulating email to the student body in which she said, “Soon this woman will come to campus. She will say these things. I disagree with them,” and [she] created an alternative event for students for whom this debate would be so upsetting. And none of that was truly a violation of any university policy or constitutional right or anything. It was more just indicative that the spirit of free inquiry and free speech and the ability to question anything, independent of how sacred others might find it, was really absent from the discourse—to the extent to which discourse existed—at Brown. And I found that to be a fundamental problem.

And there was discussion about this among students, and it became very clear that there was this attitude from activist groups of, you know, “These issues are settled. If you do not agree with us, it’s because you are ignorant or violent. Discussion is not welcome, it distracts from the goals of our advocacy and, thus, constitutes an act of violence in and of itself.”

And that, to me, was so profoundly illiberal and antithetical to the mission and ethos of the university, and the United States of America as a whole, that I decided to do something about it. And I started your standard, secret Facebook group. I called it Reason@Brown. I invited maybe five people; I wrote a post in it announcing that the purpose was for discussions about any and every topic, including and especially ones that people would not be able to have in public for fear of social censure and complete lack of support from the administration in the event of students breaking the rules.

FIRE: The group has grown significantly in that time. How many members do you have now, and what are the rules? 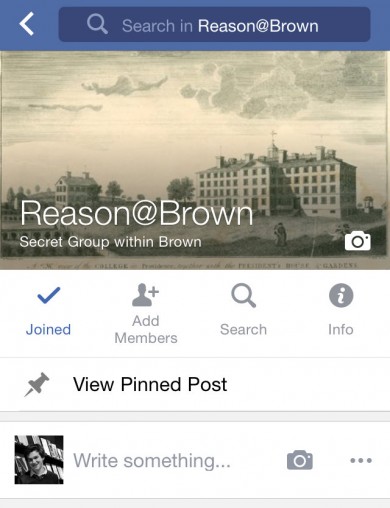 ROBOTHAM: There are 137 members right now. My rule as the administrator of the group is: keep the focus on the ideas, not ad hominem attacks or anything silly like that. No one can expect universal agreement, or any agreement, from others. The expectation is that people will be willing [to engage], and not be upset or offended if they see content with which they disagree, and disagree profoundly.

FIRE: Has that panned out?

ROBOTHAM: Yes. I would say, for the most part. I think at times, there’s a tendency for people to fall into the trap of having it be an echo chamber. But there’s actually a pretty significant diversity of opinion inside the group. Including people who support the ideology of critical race theory, or something like that, which is sort of a staple of the ideological left, but they are interested in having these discussions. So, I think that while occasionally it’s tempting for people to treat it as a conservative advocacy group or something like that, any attempts to do that have been swiftly rebuked, from both the standpoint of the administration, which I guess is myself, and other members.

So I think for the most part, people have done a pretty good job of keeping this what it was intended to be.

FIRE: Without outing anybody, what are the kinds of things people discuss within Reason@Brown that they feel they can’t talk about on campus?

ROBOTHAM: I’ll just read you a sample. I’m reading off the topics from the *.

People were discussing Hamilton College students’ list of demands to the president; someone posted questions about [Brown’s] recently released $100 million diversity plan; there’s some talk about the Princeton Open Campus Coalition; talk about an incident at Brown; talk about an op-ed in the student newspaper in which a student suggested that it is anti-Semitic for Israel to be crossed off a list of countries that have been linked to terrorism….

FIRE: What is the consensus among Reason@Brown members about what would happen if these topics were discussed publicly?

ROBOTHAM: I think the consensus is that intellectual discussion is worthwhile and, in its own right, enjoyable. And, even taking out for the moment the possibility of any degree of reprisal, that people of the dominant political voice are, in large part at Brown, uninterested and unwilling to engage in this sort of discussion.

There is a huge fear for people who have not, sort of, come out of the closet as not total subscribers to the ideologies of the radical left—a fear of social reprisal. I certainly felt that before I ever said anything that conflicted with dominant political voices. And there is certainly a belief that if you do so you will receive zero administrative support, and that, if students break the rules in their attempts to censure you, it is hard to imagine you would receive university support given the precedent that has been set on numerous occasions at Brown now, where free speech has been threatened—including recently the publishing of controversial op-eds in the student newspaper. Where activists demanded that the paper never publish anything that they find racist or sexist, and rather than point out that this is an obvious violation of the norms of an open community, the president sided with them and said that the paper was at fault for doing so.

There is an understanding that administrative support will not be found if it escalates to that point and, not only would it cause social reprisal, but it just wouldn’t be able to happen. People would be uninterested. If you challenged them, there’s the understanding you would be told you are a racist, a violent oppressor, or something like that, and that conversation or debate was a distraction from settled questions.

Even taking out the question of reprisal, it’s just a reality that these conversations wouldn’t be able to happen.

FIRE: Is there something about Brown specifically that sets it apart from other schools in this respect, or is this phenomenon part of a larger trend?

I don’t think that Brown is exceptional in this regard. I think that the Brown administration has done a worse job than other administrations in responding to this, and even in being willing to recognize that this—the opposition to free speech and discussion in public—is a pervasive problem. But I don’t think there’s anything particular about Brown itself.

I do think, however, that the fear among political liberals of being called racist or sexist has become so overwhelming that people are willing to totally disregard any principles they have if they are being called that in order to reach a state where they are not being called that. And I think in that regard, the fact that this is happening is a large consequence of the fear among the administration of what will happen if they do something that will be called racist, sexist, violent, et cetera.

FIRE: Obviously, at FIRE we think it’s pretty sad when people need to have underground free speech groups to have free speech on campus. What’s your vision for the way forward? Where do we go from here?

ROBOTHAM: Interesting. I could become the [university] president, I would make some sort of public statement—whether unprompted or prompted by one of these events—in which I said, “This is academia and you have the right to say anything, no matter how radical it is, no matter how offensive it may seem to existing power structures. You are not required to uphold ideals held by mainstream America at all.”

FIRE: How would your pro-free speech policies benefit Brown students?

ROBOTHAM: I think we would see a much greater willingness in potential speakers to come to campus. I know if I were a potential speaker, and I had said or done anything that had upset the radical left at Brown or elsewhere—especially at someplace like Brown that has shown the willingness to allow it to run against the rules—I would not want to come to Brown. So I think there would be a drastic increase in the willingness of external parties to come to Brown, which is a staple of the university experience.

I think it would result in an environment of much more open discussion on campus, which is not an abstract thing. Open discussion and freedom of speech have tangible use in progressing society. I think that that has been forgotten is unfortunate. But that would be remembered upon the institution of an administration that was willing to stand up for the freedom of speech.