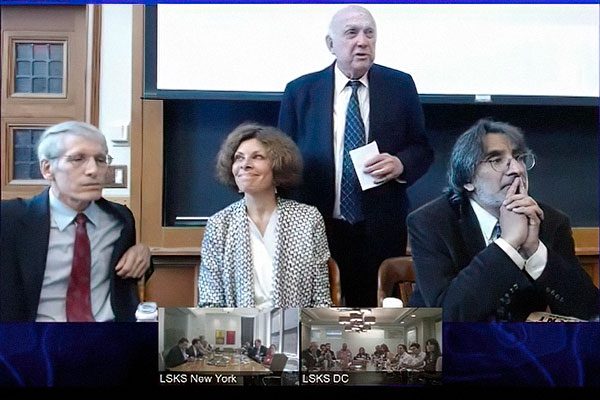 The First Amendment Salon was founded in April 2014 by Ronald Collins, David Skover, and Lee Levine. The Salon hosts a series of non-partisan programs that aim to emulate the spirit of the U.S. Constitution’s Madisonian guarantee by opening a dialogue, at once robust and diverse, about free expression in America.

To that end, the Salon engages members of the First Amendment community—lawyers, academics, journalists, and activists—in an ongoing discussion of key free speech issues of our day. Each program involves a no-charge, 90-minute discussion concerning a timely topic related to freedom of expression, whether in a contemporary Supreme Court case, book, article, legal brief, or memorandum.

Twenty-five or more invitees gather at different venues and are electronically connected via videoconferencing. The Salons typically take place at the New York and Washington, D.C. offices of the law firm Ballard Spahr.

A reception either precedes or follows each discussion in order to develop a better sense of community. In March 2015, the Salons began to be video recorded. And in August 2015, the Salon first went “on the road,” beginning with an event in Los Angeles. Collins, Seth Berlin, Floyd Abrams, and Nadine Strossen serve as co-chairs of the Salon’s advisory board.

Erwin Chemerinsky, University of California at Berkeley, School of Law