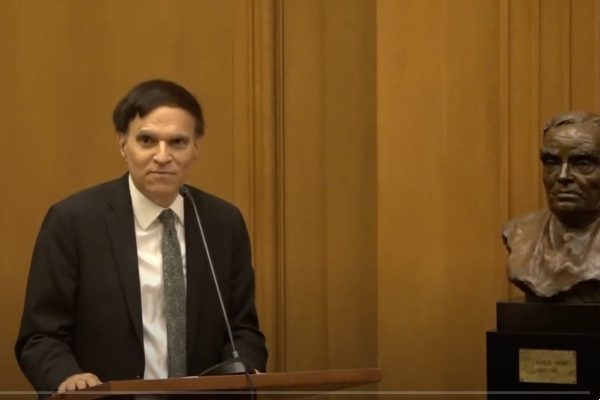 We’ve lost Robert Katzmann (68), a great judge and scholar. . . but most of all Bob was a wonderful human being. Bob was the definition of a mensch. Anyone who knew him realized that Bob devoted his life to helping others, whether it be in working to improve the plight of immigrants or in investing in the future of some person with great promise but little clout. When you spoke to him he would constantly move the conversation away from himself and back to you, or to some terrible thing that happened and needed fixing. That his death took us all by surprise should not be surprising at all — he was humble to his end. In a world rife with vanity, his humility was exceptionable, especially given his impressive credentials and achievements.

Bob and I became friends in 1982 while he was working at the Brookings Institution. We connected through our mutual respect and admiration for Judge Hans Linde, for whom I clerked. In 2017, when I called Bob to ask if he would help us stage a “reargument” of Masses Publishing Co. v. Patten on the 100th anniversary of the Second Circuit ruling, of course, he didn’t hesitate. He secured the courtroom and a distinguished panel of judges to hear the case: Second Circuit Judges Pierre Leval, Robert Sack, and Reena Raggi. Floyd Abrams argued on behalf of the postmaster and Kathleen Sullivan argued on behalf of the Masses Publishing Company. It all went off without a hitch (see video here).

So much more can be said in honor of this great judge and human being. For those who take up that charge, Bob might well admonish them: “Don’t make it all about me. Do something that will better our world and the cause of real justice in it.”

To his wife Jennifer Callahan: Thank you for sharing your man with us and for being such an inspiration to him.

To his twin brother Judge Gary Katzmann: May his greatness and generosity continue to find life in your soul, and long may you walk the path the two of you have paved.