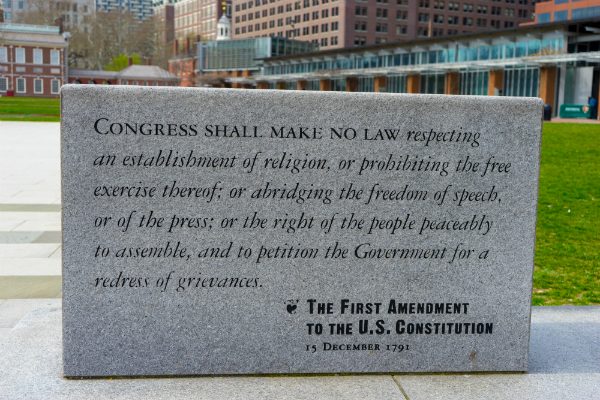 “New York Times v. Sullivan is the single most important First Amendment case ever decided by the Supreme Court. While it relates to libel law, its protective scope is far broader than that and helps to assure that freedom of speech and press are protected in this country to a greater degree than anywhere else in the world. On one level, it is ironic that Justice Thomas, who believes that purely commercial speech and street signs on highways should receive equal protection with political speech, should seek the reversal of a case that provides particular assurance that speech about matters of public import should receive particular protection. More significantly, though, the case is not just a legal landmark; more than any other, it is an articulator of and defender of American democracy. There is no basis for reversing it and, fortunately, there seems little basis that the Supreme Court would consider doing so.” (Source: Law360)

Within hours after Justice Clarence Thomas issued his McKee concurrence, news of it was being reported and commented on nearly everywhere:

Re: NYT v. Sullivan: Scalia: “I don’t recall whether it was unanimous; I’m not sure it was. [At this point Mr. Kalb interjected: “It was; it was 9 nothing.”] Even so, it was wrong. The issue is not whether it’s a good idea to let . . . anybody [Justice Scalia paused here and began his sentence anew] What New York Times v. Sullivan holds is that if you are a public figure — and it’s been a matter of some doubt what it takes to become a public figure, but it’s certainly any politician is a public figure — if you are a public figure, you cannot sue somebody for libel unless you can prove, effectively, that the person knew it was a lie. So long as he heard from somebody, you know, it makes it very difficult for a public figure to win a libel suit. I think George Washington, I think Thomas Jefferson, I think the Framers would have been appalled at the notion that they could be libeled with impunity. And when the Supreme Court came out with that decision, it was revising the Constitution. Now, it may be a very good idea to set up a system that way, and New York State [Alabama] could have revised its libel laws by popular vote to say that if you libel a public figure, it’s okay unless it’s malicious. But New York State [Alabama] didn’t do that. It was nine lawyers who decided that is what the Constitution ought to mean, even though it had never meant that. And that’s essentially the difference between Ruth and me concerning a ‘living constitution.’ She thinks that’s all right and I don’t think it’s all right.”

“I don’t know where you put conservative or liberal in the First Amendment area, but I think I’m probably the most aggressive defender of the First Amendment on the court now. I think most people might think that doesn’t quite fit with my jurisprudence in other areas.” 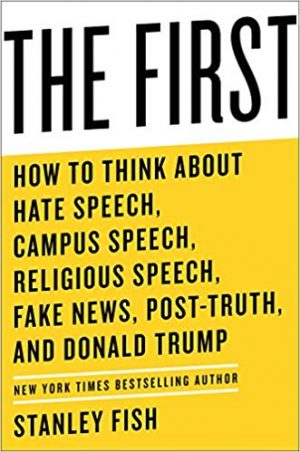 Abstract: How does the First Amendment really work? Is it a principle or a value? What is hate speech and should it always be banned? Are we free to declare our religious beliefs in the public square? What role, if any, should companies like Facebook play in policing the exchange of thoughts, ideas, and opinions?  With clarity and power, Stanley Fish, “America’s most famous professor” (BookPage), explores these complex questions in The First. From the rise of fake news, to the role of tech companies in monitoring content (including the President’s tweets), to Colin Kaepernick’s kneeling protest, First Amendment controversies continue to dominate the news cycle. Across America, college campus administrators are being forced to balance free speech against demands for safe spaces and trigger warnings. Ultimately, Fish argues, freedom of speech is a double-edged concept; it frees us from constraints, but it also frees us to say and do terrible things. Urgent and controversial, The First is sure to ruffle feathers, spark dialogue, and shine new light on one of America’s most cherished—and debated—constitutional rights. 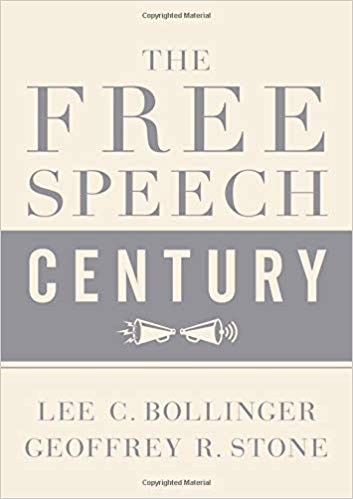 Abstract: In The Free Speech Century, two of America’s leading First Amendment scholars, Lee C. Bollinger and Geoffrey Stone, have gathered a group of the nation’s leading constitutional scholars—Cass Sunstein, Lawrence Lessig, Laurence Tribe, Kathleen Sullivan, Catherine McKinnon, among others—to evaluate the evolution of free speech doctrine since Schenk and to assess where it might be headed in the future. Since 1919, First Amendment jurisprudence in America has been a signal development in the history of constitutional democracies–remarkable for its level of doctrinal refinement, remarkable for its lateness in coming (in relation to the adoption of the First Amendment), and remarkable for the scope of protection it has afforded since the 1960s. Over the course of The First Amendment Century, judicial engagement with these fundamental rights has grown exponentially. We now have an elaborate set of free speech laws and norms, but as Stone and Bollinger stress, the context is always shifting. New societal threats like terrorism, and new technologies of communication continually reshape our understanding of what speech should be allowed.