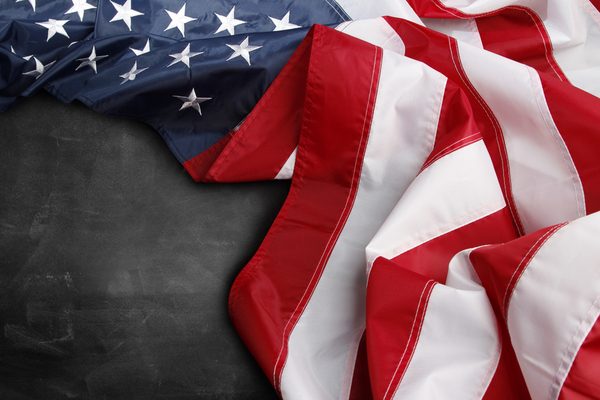 Just in time for Flag Day, a University of North Texas student, Yolian Ogbu, has received extensive criticism on Twitter for covering up the American flag with a Black Lives Matter flag in the Student Government Association office. Ogbu, recently-elected president of SGA, posted two pictures on her personal Twitter account: a “before” picture of the United States flag and an “after” picture of a Black Lives Matter flag covering the American one.

Responses on Twitter varied. Some users replied with angry comments, such as “You should have your ass beat by a bunch of veterans, then kicked out of school” and “Racist. Anti-American. Blocked and reported.” Others expressed support, with replies such as “That’s MY president” and “Growth.” Ogbu has since made her account private.

The display was reported by Campus Reform, which highlighted a provision of the U.S. Flag Code stating that “the flag should never have placed upon it, nor on any part of it, nor attached to it any mark, insignia, letter, word, figure, design, picture, or drawing of any nature.”

The University of North Texas issued a statement via Twitter announcing Ogbu would be working with UNT’s Division of Student Affairs “to respectfully remove the American flag and place it in storage in accordance with the U.S. [F]lag [C]ode.” While some find Ogbu’s display disrespectful of the American flag, it is clearly expression protected by the First Amendment, and no law, including the Flag Code, can impose criminal or civil consequences for such expression.

Whenever respect for the American flag becomes a topic of public discourse, it’s common for people to mistakenly suggest that the U.S. Flag Code imposes legal obligations on citizens. That’s hardly a surprise, given that the Flag Code (4 U.S.C. §§ 1-10) has all the trappings of law: It’s formally laid out in Title 4 of the U.S. Code (which codifies federal criminal and civil statutes), was promulgated by Congress, and provides detailed instructions regarding display of the flag.

The Flag Code, however, does not impose mandatory requirements on civilians. Rather, it is aspirational.

For example, the Flag Code’s “Respect for Flag” section (found at 4 U.S.C. § 8) provides that the “flag should never be used as wearing apparel” (not difficult to find), “should never be used for advertising purposes in any manner whatsoever” (whoops), and should not “be used as a costume or athletic uniform” (uh oh).

As the Congressional Research Service explained in its report to Congress: “[T]he Flag Code does not prescribe any penalties for non-compliance nor does it include enforcement provisions; rather the Code functions simply as a guide to be voluntarily followed by civilians and civilian groups.” The code uses “should,” rather than—as Congress does when it means to establish requirements, not mere recommendations—“shall” or “must.” It also does not include enforcement mechanisms or lay out any penalties for failure to follow its recommendations.

If, instead, the Flag Code was intended to be enforceable law, it would be unconstitutional under the First Amendment. Another federal statute, enacted through the Flag Protection Act,  previously imposed penalties for flag desecration. Under the act, anyone who “knowingly mutilate[d], deface[d], physically defile[d], burn[ed], maintain[ed] on the floor or ground, or trample[d] upon any flag of the United States” would be subject to fines or imprisonment. 18 U.S.C. § 700. However, the Supreme Court struck down the Act in United States v. Eichman because it conflicted with the First Amendment and was therefore unconstitutional.

In Texas v. Johnson, the case preceding Eichman, the Supreme Court held that burning the American flag was expressive conduct protected by the First Amendment. The Court recognized that “the very purpose of a national flag is to serve as a symbol of our country.” (emphasis added). And while flag desecration is something that many find deeply offensive, the Court reiterated that “[i]f there is a bedrock principle underlying the First Amendment, it is that the government may not prohibit the expression of an idea simply because society finds the idea itself offensive or disagreeable.” The constitutional freedom to express dissenting or unpopular ideas includes opinions about the American flag, and the government cannot set aside particular symbols as sacrosanct. The government’s interest in promoting respect for the flag does not give it the power to impose criminal consequences for political protest.

Turning back to the University of North Texas, it’s plainly apparent that Ogbu’s display of a Black Lives Matter flag is, as a matter of expression, protected. The display of a flag has long been recognized as symbolic speech, and the accusation that the student’s display was disrespectful of the American flag is insufficient to override her First Amendment rights. Institutions can encourage students to voluntarily follow the Flag Code, as UNT says it will do here, but they cannot punish those who don’t.

Isabela Palmieri is a FIRE legal intern and a rising 2L at the University of North Carolina School of Law.