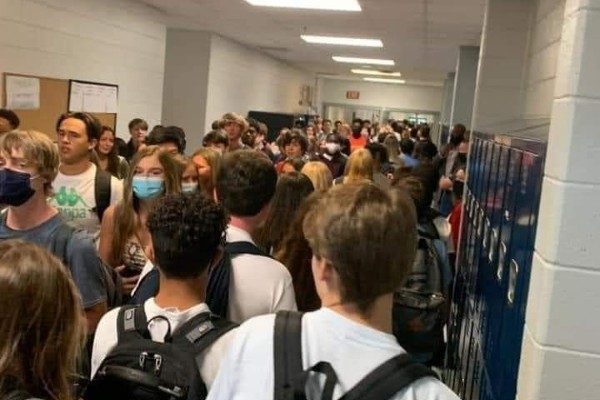 National news headlines resulted last week when North Paulding High School in Georgia suspended two students after photos they posted on Twitter of packed school hallways went viral. The same school administrators had allegedly also announced over the intercom system that any student found to be publicly critiquing the school’s handling of the COVID-19 pandemic would be punished.

FIRE joined a coalition of free speech advocates led by the Student Press Law Center in sending a letter to NPHS reaffirming that punishing students because they reveal unflattering information about their schools is not only dictatorial, but — at public institutions — also clearly violates the First Amendment. While the school did reverse the suspension of at least one student, the initial, absurdly severe punishment nonetheless has  almost certainly had its intended effect of scaring students into remaining silent on controversial issues in the future.

While last week’s situation occurred at a high school, it bears an important lesson about campus censorship in a time of crisis, equally applicable to colleges and universities.

Free speech is always hard work, and it’s even harder when our campuses, communities, and the world are in the midst of a plethora of polarizing, frightening, and difficult current events. As they grapple with these current events, individuals and institutions alike fear being perceived as having chosen the wrong side of history. Worried that the voices of their critics might be louder than their own, these same individuals and institutions are far too often turning to censorship as a means of preserving their own reputations.

This is a mistake, and it is unfolding on campuses nationwide right now.

For example, last month Fordham University placed a student under strict sanctions — including banning him from campus — after his social media posts about the Tiananmen Square Massacre and the death of retired St. Louis police chief David Dorn sparked criticism on campus. Despite FIRE writing to Fordham, calling into question these sanctions in light of the private university’s promises of free expression, the sanctions remain, and the student has since sued the university.

Let the situation in Georgia be a lesson to colleges and universities: While censorship during a crisis might seem like the easy way out, it is not the best way (nor is it likely to work), and FIRE is watching.

As another example, earlier this month, Auburn University looked into “options” for handling anti-police statements posted on social media by a lecturer, following calls for the lecturer’s termination by politicians and members of the public. After FIRE reached out, the university said it would not punish the lecturer; however, he has since been voluntarily reassigned to a non-teaching position. The suggestion that punishment was considered, especially coupled with the reassignment, likely casts a chilling effect over student and faculty speech that might be seen as controversial.

While crises bring mounting pressures on colleges and universities over their handling of hot-button issues, just as NPHS faced mounting criticism over its handling of COVID-19, institutions too often choose to silence controversial voices instead of dealing with the root of the exposed problems.

These pressures to censor, while loud, are not insurmountable, and colleges and universities must mind their obligations to abstain from using censorship as a means for handling them. As mentioned in the SPLC coalition letter, censorship of controversial student expression has been clearly banned under the First Amendment for more than 50 years. After all, unfortunate realities — like lack of pandemic preparedness, bigotry on campus, or social ills of all types — exist on campus and off, whether published or unpublished, and whether spoken or unspoken. Silence does not solve these problems, but instead allows them to fester, unchecked.

FIRE has yet to see a college or university take extreme action against students critical of COVID-19 protocol, such as the suspensions we saw at NPHS last week. But as college and university campuses begin to open — whether in-person or virtually — we think it’s important to remind institutions of higher education that the First Amendment and the freedom of speech are as essential today as they have ever been.

Let the situation in Georgia be a lesson to colleges and universities: While censorship during a crisis might seem like the easy way out, it is not the best way (nor is it likely to work), and FIRE is watching to ensure it is not the path chosen at institutions that should be upholding student and faculty rights to free expression.