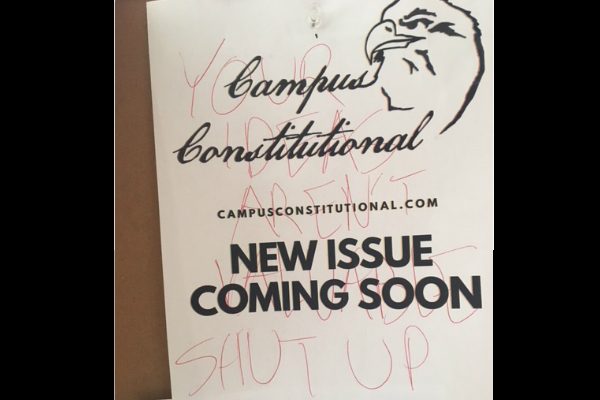 “Your ideas aren’t valuable. Shut up.” In October 2018, someone scrawled those words, in angry red pen, across a flyer for the politically conservative publication “Campus Constitutional” at Kenyon College. The words demonstrate a mood of furious intolerance that has gained a strong hold over students’ speech at Kenyon and has swept college and university campuses nationwide.

The push to contract the space for intellectual diversity and open debate threatens to freeze discussion, limit students’ willingness to debate and challenge one another’s ideas, and ultimately create a community in which unpopular ideas are met with intimidation and bullying. This is a culture that has forgotten the value of listening to all perspectives, a culture in which one’s loyalty to particular views is more important than the search for truth.

When the editors of the Campus Constitutional released their first issue, their libertarian/conservative perspective enraged many on Kenyon’s campus. But instead of dealing with their dissenting views by respectfully seeking the editors out and engaging in debate and discussion with them, too many chose to bully the staff of the publication instead. This kind of behavior escalated throughout the semester, at one point leading to the public booing of a Campus Constitutional editor simply for being present in the audience at a totally unrelated comedy event on campus.

Events such as these — the scrawled message on the poster and the booing of a Campus Constitutional editor  — promote a culture of self-censorship. These kinds of tactics silence and intimidate, chilling open and civil debate. They threaten social censure and ridicule — powerful consequences for students on campus who happen to have unpopular perspectives and who exercise their right to free speech. The result at Kenyon has been an environment of homogenous thought, in which those with ideas and opinions that differ from the mainstream feel bullied into silence. This is not the kind of environment in which a healthy, intellectually curious community can thrive. Because it is cultivated by the students, students must be active in seeking change.

FIRE gives Kenyon a “yellow light” speech code rating, meaning that it has “at least one ambiguous policy that too easily encourages administrative abuse and arbitrary application,” based on its written policies that regulate expression. Yet were FIRE to rate based on the campus culture regarding free speech, I would give Kenyon a “red light” rating. While its on-the-book policies do not facially condone the silencing of unpopular opinion, the atmosphere promoting self-censorship and thought-policing, especially among students, certainly does.

College faculty are helping to address this problem. At Kenyon, the faculty has contributed to open debate through events like the fall 2017 conference, “Free Speech and Civil Discourse,” sponsored by the Center for the Study of American Democracy on campus. CSAD brought 15 conservative, liberal, and nonpartisan speakers to Kenyon to discuss and debate the importance of free speech and open political debate. As an article in the Kenyon Collegian put it, “This conference is an opportunity for those on all sides of the debate over freedom of speech versus political correctness to air their concerns…. The speakers will go head-to-head in panels about hate speech and the limits of free expression, political correctness and microaggressions in the academy and the definitions of a free society.”

The CSAD conference was a proud time to be a Kenyonite. There was no bullying, intimidation, or verbal mud-slinging. Instead, students came to the panels prepared to listen, debate, and closely question the panelists with whom they disagreed. Through its commendable handling of this conference, Kenyon demonstrated what it means to be an intellectually curious community in which students and faculty constructively and civilly challenge and listen to each other’s ideas and arguments.

College faculty and administrators can help by teaching and demonstrating the importance of intellectual curiosity on campus, but formal policy and institutional programming is not the whole answer. Students themselves must commit to encouraging civil debate and discussion and to discouraging name-calling and bullying. At Kenyon, students are now organizing such an effort, seeking to create space on campus for themselves and their fellow students to effectively communicate across difference, dissent, and polarization.

Hosting weekly meetings to “engage with diverse political viewpoints, discuss politics on campus, and learn good practices of debate,” the group BridgeKenyon — new to campus in the fall of 2018 — commits itself to stimulating real discussion about the controversial issues of the day. At the very beginning of each BridgeKenyon meeting, participants read the basic facts about the topic for the day’s discussion. Then they read opinion pieces about the issue to understand the best arguments on both sides. After establishing both the factual basis and the opposing stances on the issue, participants debate and discuss their thoughts.

I hope that BridgeKenyon will be the beginning of real change in the political atmosphere on campus. I hope that it will help students to see the value of truly engaging in discussion and addressing opposing arguments with counter arguments rather than insults designed to shut the other person down. If something is to be done about the campus’ self-censorship culture, it will have to involve student groups like BridgeKenyon. Perhaps the most hopeful sign is that the existence of BridgeKenyon demonstrates renewed student interest in the free exchange of ideas. It suggests a yearning for real discussion in which people allow themselves to be deeply curious, open to the possibility that they might be wrong and the opposing side right, and able to engage with one another as humans, instead of political stereotypes.

We need to put aside the anger, unkindness, and violence and finally start listening to each other. As John Stuart Mill famously argued, it is impossible to truly understand one’s own opinion (let alone anyone else’s!) until one has thoroughly considered the views of the other side. It is openness, curiosity, debate, and civility that will save us from tyranny of the majority, disunity, and hatefulness. Organizations like BridgeKenyon are showing the way forward.

Elizabeth Stanley is a rising junior at Kenyon College and a FIRE summer intern.