Few campus events seem to draw as much attention — or interference — from state legislatures as those related to sex. The most recent controversy on this front comes from Arkansas Tech University, where student organization SPECTRUM plans to host a “Sex on the Lawn” event aiming to educate students about sexual and relationship health, provide HIV testing, and give students a forum to discuss sex in a supportive environment.

On Monday, an advertisement for the event caught the attention of state Rep. Mary Bentley. Noting that the advertisement was posted by, and contained the name of, the Arkansas Tech Department of Diversity and Inclusion, Bentley posed the following question on Facebook: “As State Legislators we hold the ‘Purse Strings’ of the states [sic] budget. Do you think this is an appropriate use of your tax dollars?” 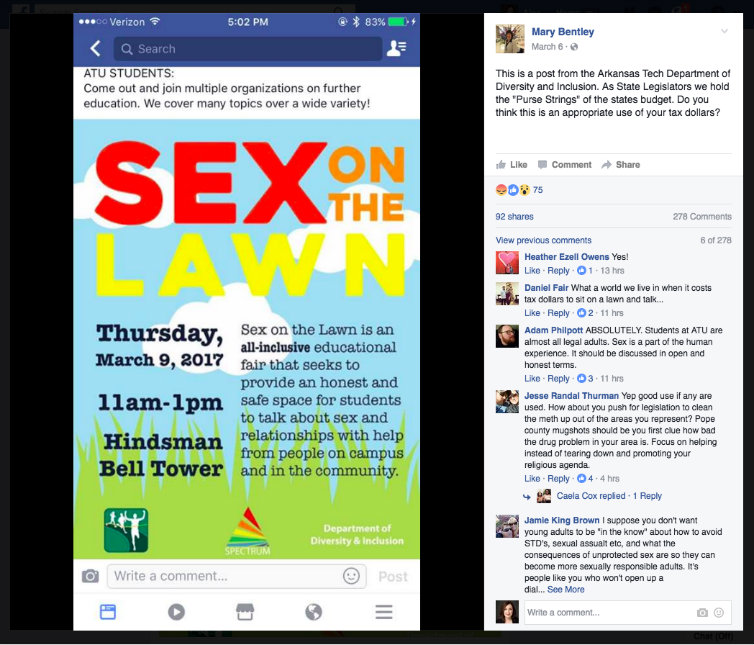 It is difficult not to read Bentley’s post as an implicit threat against Arkansas Tech’s funding, and perhaps specifically that of the university’s Department of Diversity and Inclusion. One might think that this is an uncharitable reading, but in light of similar controversies elsewhere, it is certainly not unreasonable.

Take Tennessee, for example. Legislators there threatened the University of Tennessee’s funding because of its $11,000 support of annual “Sex Week” programming put on by the student group Sexual Empowerment and Awareness at Tennessee. Ultimately, the university pulled funding for the event. But Tennessee legislators were so incensed by the idea that state funds were used to support the expression of viewpoints they disagreed with that they waged a years-long war threatening to pass laws punishing the university for allowing Sex Week to occur — even if no state funds were used.

And in 2016 they did just that, passing a law that not only forbade any state funds from being used for Sex Week (despite the fact that only student activity fees and private donations had been used for it since 2013), but also slashed the budget of the university’s Office for Diversity and Inclusion.

Threats, whether explicit or implicit, against a university’s funding because students are engaging in expression a legislator disagrees with cast an unacceptable chill on campus discourse. But you don’t have to take my word for it.

So clear was the Tennessee legislature’s message in 2013 and beyond that students wanting to put on Sex Week events at other Tennessee universities found themselves facing resistance.

In 2014, the East Tennessee State University student government rejected the Feminist Majority Leadership Alliance’s funding request for a Sex Week event in a brazen and unconstitutional act of viewpoint discrimination, citing fear of the same retaliation by the state legislature that the University of Tennessee faced.

As my colleague Will Creeley wrote in 2013 when the Tennessee legislature issued its first threat:

[I]t is disheartening to see a state legislature threaten a university with funding cuts because of the content of student programming and expressive activity on campus. Here at FIRE, we’re reminded of the Oklahoma state legislature’s ill-considered “investigation” of the University of Oklahoma following a 2009 campus speech by noted evolutionary biologist Richard Dawkins. As FIRE President Greg Lukianoff wrote at the time:

If this investigation is indeed taking place, what the state legislature needs to understand is that in court cases dating back to the days of the House Committee on Un-American Activities, even investigating clearly protected speech on the basis of its viewpoint violates the First Amendment.

Think about it: If every time a student or faculty member invited, say, Rick Warren to speak on campus, they knew they would be subjected to a thorough and time-consuming investigation by state officials, you can all but guarantee that schools across the country would think twice before inviting Rick Warren. This would be a great way for state legislatures to chill speech they dislike without ever having to find the speaker guilty of a single thing. Talk about your un-American activities.

Given the fact the legislature clearly is concerned with nothing other than Dawkins’ viewpoint, such an investigation is improper and should end immediately.

For its part, Arkansas Tech has admirably defended its students’ First Amendment rights. In a statement issued Monday, the university wrote:

This March will mark the third consecutive year in which SPECTRUM, a registered student organization at Arkansas Tech University, has hosted an event that seeks to provide any interested students with information relevant to sexual health. A few examples of topics include unplanned pregnancy prevention, sexually transmitted disease prevention, sexual assault resources, consent and healthy relationships. Arkansas Tech University is content neutral as it relates to the free speech of its students, faculty, staff and registered student organizations and seeks to provide venues for individuals and organizations to share their views in a way that does not interrupt the educational process.

State legislatures do, to a degree, have an oversight function with respect to the universities they fund. But legislators must remember that micromanaging campus programming to fit their own personal predilections and views is fraught with peril and undermines the lofty status that the Supreme Court ascribed to the academy in Healy v. James (1972), when Justice Powell wrote that “[t]he college classroom with its surrounding environs is peculiarly the ‘marketplace of ideas.’”

We certainly hope Rep. Bentley did not intend to imply a forthcoming attack on Arkansas Tech’s funding simply because she disagreed with a student-led event, and we remain ready to work with her and the entire Arkansas legislature to ensure that freedom and liberty ring throughout all state college and university campuses. But FIRE will also be eternally vigilant, and continue to oppose any legislative interference that threatens to chill student or faculty speech on campus.