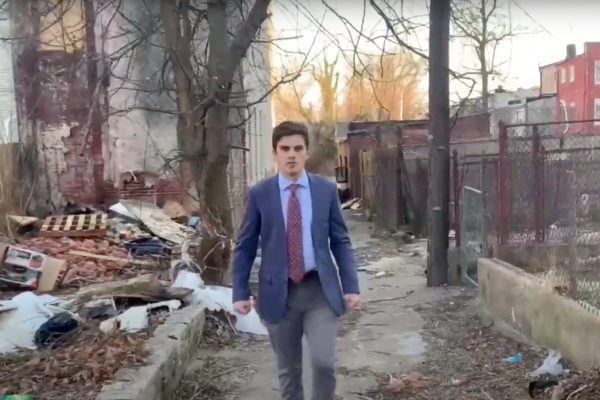 At Loyola University Maryland, a small Jesuit liberal arts university in Baltimore (and my alma mater), service and community-building are heavily emphasized. Yet while Loyola’s core values state an intent to “inspire students to learn, lead, and serve in a diverse and changing world,” three students who tried to put these values into action during a business school “pitch” contest found themselves at the center of a political firestorm. It would result in their being potentially punished, metaphorically “canceled” — and the business school contest being literally canceled.

Loyola’s Sellinger School of Business and Management’s “Building a Better World Through Business” event is “an annual series of events designed to celebrate the good that business does for society as it works to transform the world through sustainable economic and social development.” One of the events is a pitch contest, in which teams of students compete for prize money. This year’s “challenge question” that the pitch was supposed to answer was “How might the Baltimore business community effectively advance racial equity?”

On March 22, the Sellinger School posted a YouTube video (now made private, re-uploaded here), of one of the video submissions for the pitch contest. It features three students explaining their pitch, which they titled “Baltimore’s Financial Fathers.” The video opens with a student quoting from Frederick Douglass as the driving inspiration for their proposal: “It is easier to build strong children than it is to repair broken men.” As they stand in various areas of a litter-strewn neighborhood of Baltimore, the students discuss their proposition to create a mentorship program “to teach the underprivileged youth of Baltimore basic financial literacy and an entrepreneurial mindset and what it takes to be a great leader.” They quote then-Sen. Barack Obama’s statement in a 2008 speech that the absence of fathers “leads to being five times more likely to end up in poverty, nine times more likely to drop out of school, and 20 more times more likely to end up in prison.” The project aimed to integrate with the Baltimore community by pairing successful black business owners with children to mentor.

This did not sit well with members of Loyola student group Addressing the System, whose self-described purpose is to “spark necessary conversations” about race. The group posted a link to the video, deeming it “disrespectful and racist.” In its Instagram caption, the group argued that the video promotes “the ideology of white saviorism, white supremacy and most of all a lack of addressing structural racism.”

A number of Loyola students then began calling for the business school to do something about the video and the “racially abusive” attitudes the students allegedly expressed in it. The Student Government Association at Loyola also chimed in on its Instagram account, asserting that it “[did] not condone” what it deemed to be “racially insensitive messages” in the video. As co-sponsor of the event, the SGA indicated in its Instagram story that it would intervene to seek information on how the video received approval from the steering committee before being posted.

A timeline posted on March 24 on the addressing.the.system Instagram account explains what happened next. The group had posted about the video on Monday, March 22. According to its timeline, around noon on Tuesday, Sellinger School of Business and Management Dean Kathleen Getz emailed the group saying that she and the business school leadership were “reflecting on how to make changes.” At around 4 p.m. the same day, Getz sent an email to “students who had contacted the business school directly about the issue,” announcing that the competition was canceled and apologizing that “videos uploaded for community voting were not screened.”

Most alarmingly, though, Getz’s email to participating students (a partial screenshot of which was obtained by FIRE) stated that the business school would be “seeking opportunities for members of our community to participate in a practice of restorative justice.”

If this means that the students who appeared in the video will be forced to engage in “restorative justice,” that would be a clear violation of their freedom of speech and potentially their freedom of conscience.

Although it is a private institution, Loyola policy states that it “is committed to standards promoting speech and expression that foster an open exchange of ideas and opinions.” Its actions here strongly suggest otherwise.

As a once-proud Loyola University alum, I am ashamed that my alma mater has succumbed to this kind of pressure.

While the students in the video do not appear to have broken any university policies, the video’s subjective offense to some viewers has been used as reason to cancel the contest entirely, depriving that team and all other teams of the opportunity to win the announced prizes and squandering all of the effort that all participating students put into the pitches.

As a once-proud Loyola University alum, I am ashamed that my alma mater has succumbed to this kind of pressure. Where strong university values once guided Loyola and its initiatives, it seems those have been replaced by submission to politically motivated demands from social media. FIRE will be watching to ensure that the business school’s promise of “restorative justice” does not, in fact, turn out to be a speech-based punishment for these three unwary students.