For the third year in a row, the New York State Senate will again consider a bill that would bar funding to student organizations engaged in “hate speech” or the promotion of boycotts of Israel or certain nations allied with the United States. The bill — which, if adopted, would be patently unconstitutional — has twice passed in the state Senate, only to die in the Assembly.

The bill would ban public universities from funding not only student organizations that engage in boycotts themselves (expressive activity itself protected under the First Amendment), but also bar funding for any organization that so much as dares to express support for or “directly or indirectly promotes, encourages, or permits” boycotts of certain nations, or “intolerance” or “hate speech.”

The First Amendment has no exception for “intolerance” or “hate speech.”

The definition of “boycott” is also incredibly broad, encompassing “any activity … that will result in any person abstaining from commercial, social or political relations, with any allied nation” with the “intent to … cast disrepute upon … such allied nation.” That’s more than refusing to do business with a particular state. By its plain language, the definition would prohibit speech encouraging political leaders to reconsider relationships with any allied nation.

What constitutes an “allied nation” is also difficult to divine, relying on a list of treaty organizations (NATO), treaties (the Southeast Asia Treaty of 1954 or the Rio Treaty of 1947, except Venezuela), and individual states (Ireland, Israel, Japan, and the Republic of Korea). So we made a map of which states could or could not be criticized under this proposal: 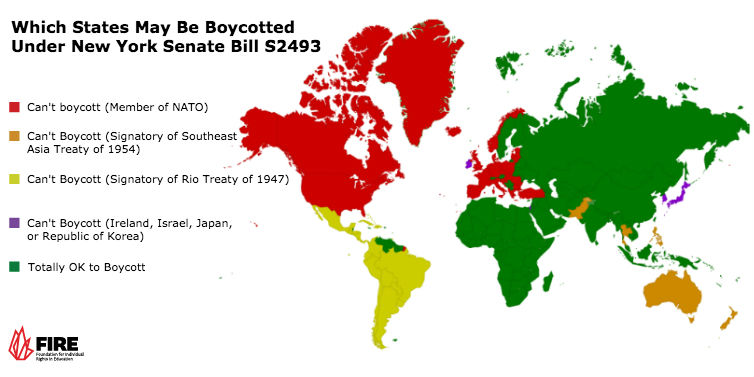 But even with a map, it’s hard to find which nations fall within the scope of this bill:

As we’ve repeatedly explained, this proposal is patently unconstitutional:

Worse, the definition of “boycott” is so vague that it would prohibit student organizations from calling on “any person” — including the President of the United States and other elected officials — to abstain from “political relations” with an allied nation. That means that if your student organization wants to call on Congress to reconsider its relationship with the state of Turkey, it will be ineligible for funding, because Turkey is a member of NATO.

We hope that the third time’s the charm and that when this bill dies, again, the New York State Senate will cease rattling its sabers at students’ First Amendment rights. If lawmakers pass this bill into law, they should consider setting aside funds to pay the attorneys’ fees the state will have to pay when the law is stricken on First Amendment grounds.