FIRE > Newsdesk > Top Story > Newsflash: The First Amendment does not give you the right to spray chemicals at people 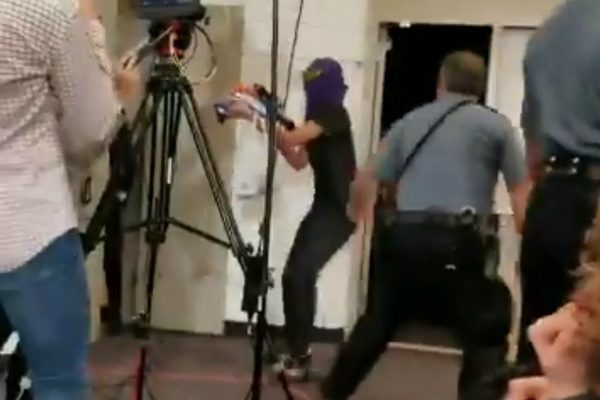 It might be hard to believe right now, but in my first decade or so at FIRE it was very rare to hear of protest-related violence against, or over, campus speakers. There were a few incidents that I remember, like an incident at the University of North Carolina in 2009 where a speech by then-Congressman Tom Tancredo about immigration was disrupted by protestors who smashed one of the room’s windows, or the off-and-on trend of hitting speakers like Ann Coulter and Bill Kristol in the face with pies.

Those relatively innocent days appear to be in the rear-view mirror, as many people see fit to promote the idea of punching Nazis (or whoever they deem to be their moral equivalents) in order to counter their views, while snickering at videos of the assaults. The fruits of this attitude were again on display last night at the University of Missouri at Kansas City. Daily Wire writer Michael Knowles, there to give a speech titled “Men are Not Women,” was reportedly assaulted by “a masked protester who used a super soaker to fire liquid at him that appeared to be glitter-colored bleach.” (The chemical apparently turned out not to be bleach, but rather something that smelled like it. This was likely done to scare the speaker, though we don’t know for sure.) Police grabbed the protester and a scuffle then broke out in the room, which led to one person being tased and arrested.

The First Amendment protects peaceful protest. This includes angry, loud protests where huge numbers of people are voicing their opposition to a speaker, as long as a heckler’s veto situation is not created. It does not protect any kind of physical assault or violence, either by hand or by weapon, including chemical-filled squirt guns. Those who engage in such behavior should be disciplined or prosecuted, as appropriate, because allowing such activity to go unpunished simply invites more of it. Worse, it practically begs for escalation from the other side. If you make it your business to punch “Nazis,” you have given them every reason they need to start punching right back, especially if that’s what they’re looking for.

Worse still is the fact that we are seeing this sort of violence occur on college campuses. For all the talk about the demand for “safe spaces” on campus, the one thing that a campus most certainly does need to provide is a physically safe space for the sharing of ideas and expression. This is an absolute, foundational requirement for a university to be able to fulfill its basic functions of generating knowledge and communicating it to students. A public park will still be a park after a violent protest runs its course. But if a university becomes a place where people come to expect violence in response to their communication of ideas, it is a university only in name, with no reason to exist, and certainly no moral claim on public support.

UMKC police acted quickly here, and it’s good that Knowles was not sprayed with bleach or some other hazardous chemical. But while it’s important that authorities act when such incidents occur, they cannot by themselves ensure that the university is the marketplace of ideas that it is intended to be. In our free society, audience members and even protesters have their part to play as well, by eschewing physical violence against political opponents and finding peaceful ways to work out important ideological disagreements. We abandon that at our peril.