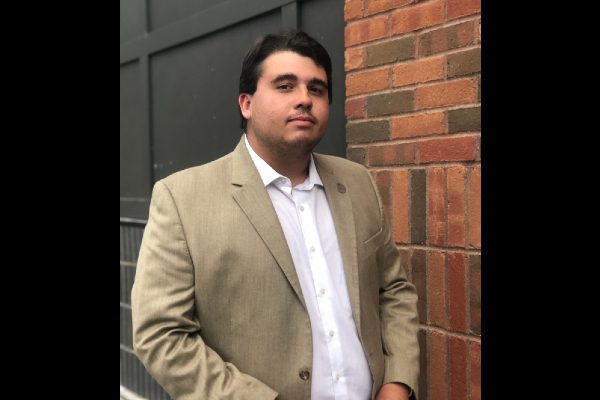 Alex Drury is not afraid of a fight. If he was, he probably would have quit student activism after someone slid a burnt copy of the Constitution under his door with “fuck off nazi punks” written on it.

Alex is the president of Young Americans for Liberty at Transylvania University and a former member of Transy’s Student Government Association. Over the past year and a half, Alex and his group have been working to reform onerous speech codes on his university’s campus, traversing the labyrinth of committee meetings and countless talks with university administrators.

Last month, Transy’s student government, serving as an advisory board to the university president, declined to recommend and voted down all but three of Alex’s 18 proposed changes to his university’s speech codes.

We talked to Alex about the recent vote in Transylvania’s SGA, his long journey to reform speech codes at the university, and what he hopes will happen next.

The following interview has been edited for length and clarity.

FIRE: Alex, thanks for talking with me today. Can you tell me a little bit of background on some free speech issues that have come up at Transy in the past year?

Alex Drury: Right, so what we saw last week was the latest occurrence in a long line of anti-free speech sentiment on campus. For me, it really all started last year in September, when we handed out pocket Constitutions for Constitution Day. That same day, a couple of different first-year students took one of those Constitutions, lit it on fire, wrote “fuck off nazi punks” on it and slid it under my door.

FIRE: Wait, whose door did they put that under?

AD: Oh, it was mine. One of the students actually lived on my floor and they knew I lived there. Like I said, all we were doing was handing out Constitutions on Constitution Day.

AD: Yeah, but we moved past it. We wanted to promote the ideas of liberty, so that year in October we did a civil liberties graveyard for Halloween. If you’re not familiar with what that is, we set up a bunch of cardboard tombstones and wrote civil liberties on them, like “sound money” or “religious freedom” or “gun rights.” On the bottom, we wrote a court case or a piece of legislation that we believe curtailed those rights.

That same day, a couple of different first-year students took one of those Constitutions, lit it on fire, wrote “fuck off nazi punks” on it and slid it under my door.

So not only was that display destroyed and kicked down after we put it up, but throughout the day we had a lot of students just crying and asking “why, why” was this on campus. Within two days after our display was set up, Transy administrators actually tightened several parts of their free speech policies.

FIRE: So Transy’s response was to make it harder to put up a display?

AD: Well, they would never admit it was a direct correlation, but two days after our display went up an email went out from administrators telling us that our free speech and expression policy had been updated. So basically, they started to require more approval from administrators. Administrators now had to know a lot more about demonstrations. This made it even worse because we already have a free speech zone on campus. It’s only about 40 to 50 feet by maybe 25 feet. You can’t really move around, it’s all concrete, there’s tables and chairs everywhere, blocking the ability of students to really do anything.

FIRE: Is this what led you to start working with administrators to revise these policies?

AD: Yes, what we tried to do was meet with administrators and start a dialogue about why these policies were causing problems on campus. What we found was that still the administration was extremely hostile to revising its speech codes.

FIRE: Can you give me a little background to the SGA vote last week? When did the administration finally start listening?

AD: Things started to change when our former president resigned. Our university was not really prepared for him leaving, things happened pretty quickly. Transy put in an interim president, Dr. John Williams, and in August we reached out to him and the dean of students and asked if they were willing to meet and make the university a better place for students to express themselves. Thankfully, they said they were willing to! And since August, we’ve been meeting and working with the president and dean to come up with policy revisions that best reflect the constitutional expectations for free speech. So we got together and looked at the specific policy problems in place and began working with FIRE.

(Note: Although Transylvania University is a private institution, and thus not bound by the Constitution, it does make explicit promises of free speech in its student handbook.)

FIRE: How did the SGA get involved in this process?

AD: Our interim president wanted to include more students in the process. What we were afraid of from the beginning was that the SGA might not understand their rights on campus and that it could eliminate the rights for the majority of students, but ultimately what we concluded was to include the SGA. The SGA’s job, as stated in their own constitution, is to support and expand student rights and they also serve as an advisory board for the president and administration. So we decided to go through the SGA, present the policy changes, meet with them to get their thoughts, and ultimately get a resolution vote on our free speech policy revisions. 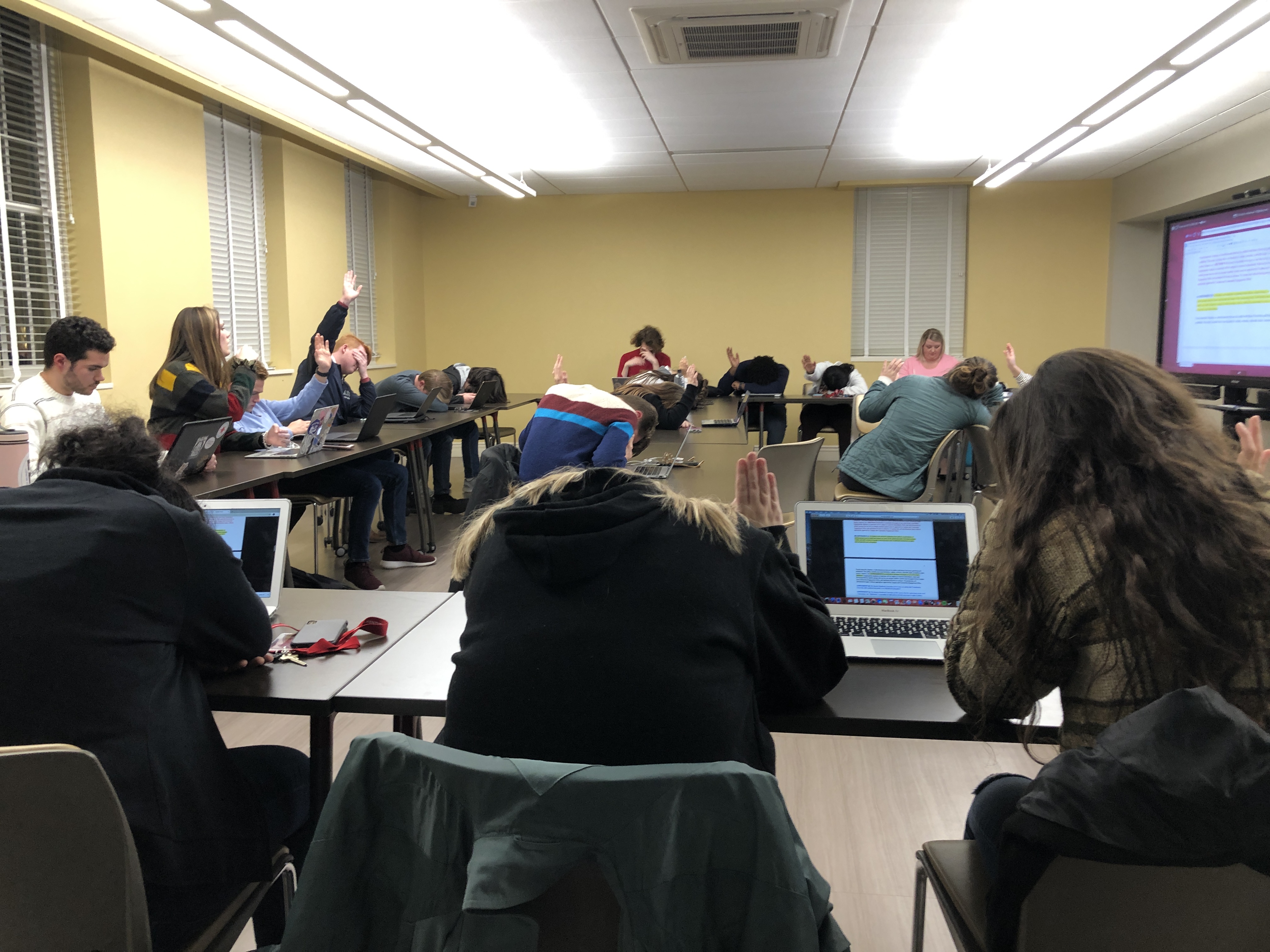 We went along in good faith through this entire process, countless meetings, and quite a few of those meetings were pretty hostile, honestly. It seemed the largest theme was students concerned about safety and a campus atmosphere. At the end of the day, some students in the SGA did not understand how the speech policies in place could be traced back historically to marginalize the exact communities that they’re trying to protect. For example, speech codes and speech restrictions, you can trace them back to the civil rights movement when universities were trying to silence African American students from advocating for civil rights on campus. The same in the LGBT communities, this is happening around the country even now. What they didn’t understand, I presume, is that these speech code policies are indiscriminate in who they silence. So after weeks and weeks of deliberation from the SGA, it came to the vote we had last Wednesday.

FIRE: So now we’re at the vote. Tell me a little bit about what went down.

AD: So we had a handbook committee meeting beforehand. This was a smaller group of about eight or nine people on SGA who deal directly with handbook decisions. They usually aren’t very active, but since this was a policy in our handbook, they convened. What we found was that especially the head of the student handbook committee was very, very hostile to this idea of adopting these policy revisions. By the end of the meeting, the Handbook Committee chair was telling us that if students don’t like the policies that Transy has, they should just leave. It came down to it that the handbook committee was just unwilling to change their positions. The big ones were that they still wanted a free speech zone, they did not want to give students the ability to speak or protest anonymously, they didn’t believe that students should be able to canvass or petition other students without prior approval, and they also believed that the university still reserved the right to censor the student newspaper prior to publication if they choose so. We recognized these just weren’t areas we were able to compromise on. And that led us to our vote on Wednesday.

FIRE: Were any of your group members there? What was it like at the vote?

AD: Yes, my vice president and I were there, although we were not allowed to talk or explain any of the policy revisions. We were told that each of our policy revisions would be voted on one by one. What we saw was pretty much a sham. The student handbook committee had written up recommendations on whether or not the SGA should vote on a resolution. Despite several questions and confusion from student senators on the proposed policy changes, we were not allowed to speak or explain the changes while the handbook committee could.

FIRE: Did any of your policy revisions actually pass?

AD: Yes! (laughs) Three out of 18 were adopted. The first one was striking the word “orderly” from demonstrations. They also revised minor wording in our heckler’s veto policy, and poster policy. The rest of the resolutions were voted down. I don’t think there was a vote where more than four people voted for passing our policy revisions outside the ones that were accepted.

FIRE: What do you see coming next?

At this point, compromise is impossible. I don’t compromise on civil liberties and civil rights.

AD: So, when we first began talking to the interim president and the dean, we made it very clear that we’ve seen student governments at other universities vote to reject free speech or vote to restrict it. He was very clear and open to that, but he wanted to put the vote to the SGA in an advisory role and include more students in the dialogue. Going into this, we knew regardless of what happened with the SGA we wouldn’t let it affect our position that everyone on campus has a right to free speech. While we understand it’s not ideal that the SGA did not find our policy revisions favorable, what we did find was that it didn’t change our minds, and we are meeting with the president on Feb. 13 to see where we go from here.

FIRE: How are you feeling after the vote?

AD: To sum up, disappointed but undeterred. It was disheartening and we went into discussions with SGA with best intentions. These policies have been in place for a while and they have created a chilling effect for students on campus to the point where opening up to an exchange of ideas is scary to some students.

FIRE: What would be an ideal resolution in this situation?

AD: The ideal situation, and really the only acceptable situation, is a full and complete acceptance of free speech on campus. At this point, compromise is impossible. I don’t compromise on civil liberties and civil rights. While I understand the well-meaning intentions behind other people’s ideas, the only way we will be truly satisfied is if the university upholds its promise that it has made to its students and the promise that all Americans have been given through the United States Constitution. So at the end of the day, whether or not the president changes these policies willingly, or we have to get these policy changes done another way, these things will be changed and students will be given a chance to speak their mind on campus no matter what.

Have a question about a speech code at your college or university? Contact FIRE’s Policy Reform Department today.