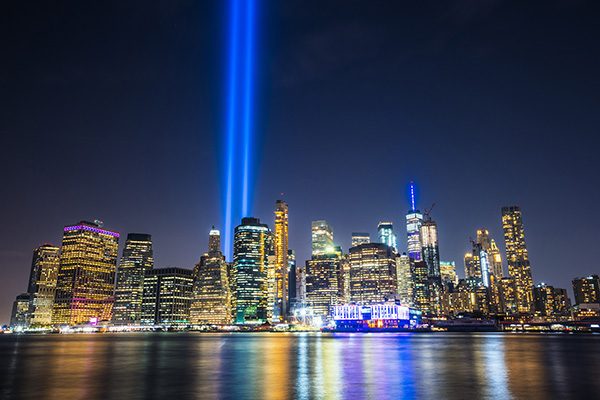 When it comes to the terrorist attacks of September 11, 2001, it’s hard to imagine saying anything that hasn’t been said before — and better — by so many others. Like so many millions of others, those of us at FIRE who were alive and adults at the time can’t forget what it was like to witness the death of 2,977 fellow humans as it happened, to wonder if anyone we knew or loved would be found among the burning wreckage, and to mourn or pray for those who lost their lives or loved ones for reasons that were incomprehensible or dimly understood.

For FIRE, only two years old at the time, it also meant that nearly all of our campaign to restore free speech, due process, academic freedom, and First Amendment rights to our nation’s college and university campuses would be conducted in an America shadowed by the missing Twin Towers. The resulting shift from liberty towards perceived safety has likely been the greatest challenge for civil libertarians, both on campus and in society at large. But the attacks of September 11, 2001, themselves also directly provided fodder for campus censorship and controversy, both immediately after the attack and for many years afterwards.

As recounted in FIRE articles and case materials over the years, the reaction to 9/11 tested our campuses’ commitment to principle, and too many of them were found wanting. Flags or other patriotic symbols posted in support of America and the nation’s response to the attacks were removed. Professors who spoke out in support of military action against terrorists were disciplined—as were those who stated that America might have had it coming, as was at least one who simply hosted a class discussion about the attacks. One student even got in trouble for challenging students who “expressed delight” over the attacks. Campuses certainly could have handled it worse, overall, but they should have handled it better.

In the twenty years since, we have repeatedly been reminded that there’s always a reason that seems sufficient at the time to jettison the fundamental principles of liberty that make America distinctive as a nation. Yet as difficult as it may be, there’s no choice but to keep faith in these values, no matter how seemingly impossible it might seem at the time, if they are to survive at all. Twenty years on from that fateful day, though, we fervently hope that whatever challenges may lie ahead in our jobs and in our lives, our nation won’t ever see a morning like that again.