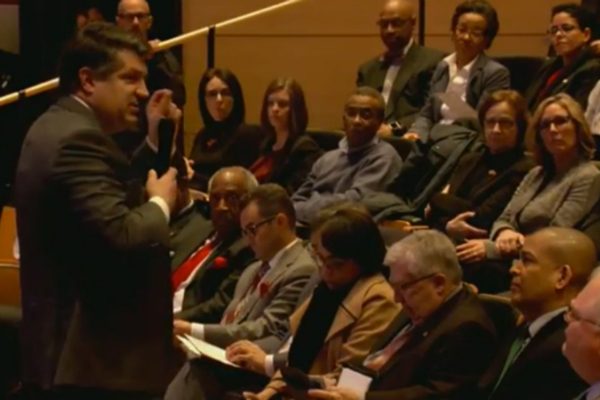 In February, students at Rensselaer Polytechnic Institute stood on a sidewalk outside of a hockey game, passing out buttons and flyers critical of the administration — until private security guards stopped them, claiming they had “eminent domain” over what the students reasonably believed to be a public sidewalk.

In a town hall last week (full video here, and relevant video here), RPI President Shirley Ann Jackson asked the Institute’s public relations director and lawyer to respond to the controversy. After conceding that an officer was wrong to use the term “eminent domain” — which made no sense at all — RPI’s leadership claimed that the Institute in fact owns the sidewalk and was therefore justified in asking the students to leave. Whether RPI even owns the sidewalk is, as we’ve observed before, a moot point, as its own policies purport to grant students the right to engage in speech without requiring advance permission.

RPI’s lawyer, Craig Cook, then attempted to justify the requirement that students get permission to distribute flyers on campus, invoking the possibility that students might pass out political flyers somewhere on RPI’s 287 acres of campus:

It has a policy against solicitation, but that’s limited to commercial solicitation in dormitory buildings. Of course, that hasn’t stopped RPI from claiming that it applies to students seeking support for a campus movement critical of the administration, which is decidedly not “operating a business” or engaging in “fundraising.”

RPI also has a policy that says that “[i]ndividual students or groups of students who wish to reserve” space on campus “should consult with” various administrators. Not only does this not require students to speak to anyone, the policy is — as we’ve pointed out before — limited to students who want to reserve space to the exclusion of others.

Another RPI policy allows “signs” to be carried, so long as doing so doesn’t interrupt the Institute’s functions, which is sensible. Yet that same policy requires that any “business external to” RPI get express permission before posting signs — a requirement that it does not impose on students or student organizations. This same policy also shows that RPI could readily limit campus access by outside organizations — for example, credit card companies — that seek to advertise to students. RPI has made these companies no promises and owes them nothing.

But RPI does have policies promising that the “Institute shall not impede or obstruct students in the exercise of their fundamental rights as citizens,” and that RPI will not use the “denial of access to” campus resources “as a means of censorship or suppression of any lawful activity.”

Even if this policy both existed and were consistently enforced — and Cook concedes it is not — requiring students to get an administrator’s permission to hand out a flyer somewhere on its 287 acres of campus is contrary to the fundamental principles of freedom that RPI guarantees to its students. As the Supreme Court observed in Watchtower Bible and Tract Society of New York v. Village of Stratton:

It is offensive—not only to the values protected by the First Amendment, but to the very notion of a free society—that in the context of everyday public discourse a citizen must first inform the government of her desire to speak to her neighbors and then obtain a permit to do so.

Requiring advance permission to engage in basic expression is also a form of a prior restraint, “the most serious and the least tolerable infringement on” freedom of expression. It’s a form of censorship so intolerable that the Supreme Court has said that the “chief purpose” of the First Amendment was to prevent its use.

Meanwhile, RPI President Shirley Ann Jackson, one of the most highly compensated college presidents in the United States, tells the editor of the Times Union that it’s just a minority of students who are impacted and that RPI is “moving on” from the controversy:

Our students are a very quiet student body.  But there is a social media amplification effect that can occur and I would say that 95 or more percent of our students are just going about their business. Certainly we have had our share of things that you all have written about but in the end we are moving ahead. And these students are still getting a great education, and what they are learning even as a part of dissent is a part of their education.

Jackson is wrong. It doesn’t matter whether it’s five percent of her students, most of them, or just two students passing out buttons on a sidewalk. If RPI is giving its students an education in what it means to “dissent,” the lesson is that powerful institutions are inclined to abandon the pretense that they care about freedom of expression if it means they can’t control what’s said about them.