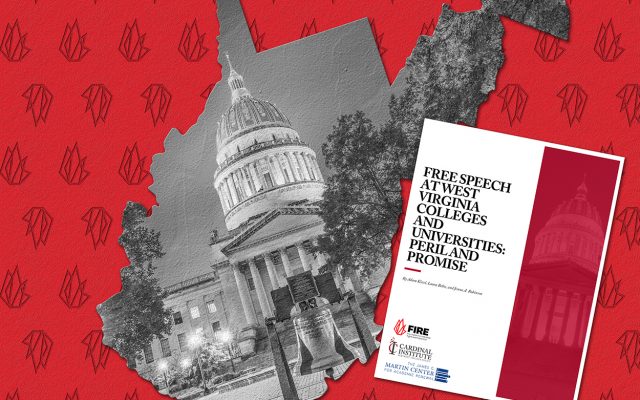 PHILADELPHIA, June 20, 2022 – West Virginia’s four-year colleges and universities maintain nearly 100 policies that restrict freedom of speech, according to a new report from the Foundation for Individual Rights and Expression, the Cardinal Institute for West Virginia Policy, and the James G. Martin Center for Academic Renewal.

“Freedom of speech is a core West Virginia value,” said Cardinal Senior Fellow Adam Kissel. “But Mountaineers are not always free on our college campuses.”

FIRE reviewed the speech codes—policies that prohibit expression that would be protected by the First Amendment in society at large—at 17 public or private colleges and universities in West Virginia and found 92 policies that restrict freedom of speech. 47% of those West Virginia institutions earned FIRE’s worst, “red light” rating for clearly and substantially restricting free speech, while just 18.5% of schools earn that rating nationally.

University of Charleston bans language that can “potentially result in another student feeling … embarrassed” and censors posters that are not “in good taste.” West Liberty University bans “hate speech” and Shepherd University bans “hate activities that demean [or] ridicule … other members of the campus,” even though most speech commonly identified as “hate speech” is protected by the First Amendment and cannot be censored.

The report’s authors look forward to opportunities to work with West Virginia institutions to conform their policies to their free speech commitments and obligations. In addition, legislators could improve upon Senate Bill 657, which reinforced those obligations in 2021; the state’s Higher Education Policy Commission can use this analysis in its upcoming report to the Legislative Oversight Commission on Education Accountability (LOCEA) on barriers to free expression on campus; and students can advocate for the expressive rights they are due.

A decade ago, the Martin Center produced a similar report regarding free speech at North Carolina colleges, finding no colleges with a “green light” from FIRE. But over time, North Carolina became the top state for green light institutions, with an amazing 15 of them—more than two-thirds of the state’s institutions rated by FIRE.

The Foundation for Individual Rights and Expression is a nonpartisan, nonprofit organization that defends and sustains the individual rights of all Americans to free speech and free thought—the most essential qualities of liberty.

The James G. Martin Center for Academic Renewal is a nonprofit institute dedicated to improving higher education in North Carolina and the nation. Located in Raleigh, North Carolina, it has been an independent 501(c)(3) organization since 2003.