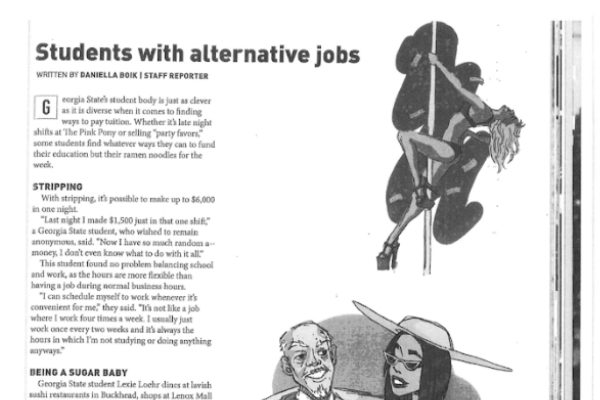 Student journalists at Georgia State University are scrambling to distribute thousands of copies of their summer magazine, The Urbanite, after administrators decided not to include it in the university’s student orientation materials. While the administration is under no legal obligation to distribute the magazine, it didn’t help its relationship with student journalists by offering a dubious justification for the decision — and student employees’ refusal to let the student newspaper’s staff distribute the newspaper themselves likely abridged the First Amendment.

For the previous five summer orientations, Georgia State’s administration had included copies of The Urbanite — the summer magazine published by the student newspaper, The Signal — in bags distributed to new students. On June 3, just a few days before summer orientation, Director of International Student and Scholar Services Heather Housley informed The Signal’s editor-in-chief that 2,000 copies of The Urbanite would not be distributed to new students. Housley cited the university’s desire to “avoid using paper as much as possible” as the reason for the change.

At first blush, the university’s reason is puzzling. The magazine had already been printed at a cost of nearly $8,000, so no paper would be saved by declining to hand out the magazine in orientation packets. If the reason was to reduce the use of paper, why hadn’t the university informed The Signal sooner? It’s possible that the university was concerned about overloading incoming students with paper information, rather than environmental concerns, but an investigation by The Signal suggests another possibility.

Indeed, the university’s proffered explanation wasn’t borne out by emails between administrators, obtained via a Freedom of Information Act request. Those emails revealed that the less-paper rationale was a pretext and that administrators were concerned about the content on Page 33 of The Urbanite titled, “Students with alternative jobs.” 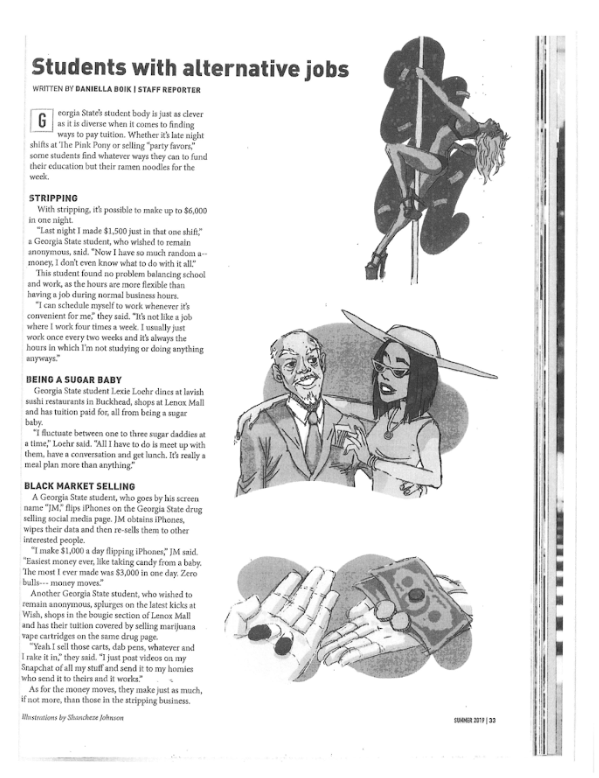 The article consisted of interviews of students with what The Urbanite calls “alternative jobs,” namely as a stripper, a sugar baby, and a marijuana dealer. The article was meant to serve as a foil to another article: “On-campus jobs for everyone.”

“Black marketing selling is not an alternative job, it is a crime,” wrote Allison Calhoun-Brown, the university’s new vice president for student engagement and programs, wrote in an internal email. That same day, she emailed about her decision to keep The Urbanite out of student orientation packets.

In general, administrators are under no obligation to include a student publication among the materials compiled by the administration. But offering a pretextual reason for the refusal — or at least providing a half-truth — suggests that administrators were most concerned with GSU’s image, which weighed on the decision to exclude the magazine.

Subsequent events demonstrate the consequences of that attitude and skirted the line of unlawful censorship.

At the orientation event, which consisted of student groups distributing information to incoming students from tables in the event space, an orientation leader approached newspaper staff and informed them that they were not allowed to hand out copies of The Urbanite. The orientation leader didn’t cite the administration’s original excuse for reducing paper usage; she claimed it was “because they talk about stuff that’s not appropriate at Georgia State” and cited FERPA, a federal privacy law pertaining to student records.

After the newspaper’s staff pushed back, a student orientation coordinator said the magazine could be distributed by newspaper staff, but only from their table. This policy, if consistently enforced without respect to content or viewpoint, might be a reasonable restriction, but the university did no favors for itself by citing the content of the magazine in enforcing it. Had the university not quickly allowed The Signal’s staff to distribute the magazine at all, while letting other organizations hand out documents, the university would certainly have violated the First Amendment.

Faced with the university’s response to the magazine’s contents, the newspaper staff did what journalists do: they shared their story.

The Signal interviewed several student members of the orientation staff. While a few supported the university’s decision, many did not, and some only spoke to the newspaper anonymously for fear of retribution by the administration — a clear example of the chilling effect of the administration’s actions have had on students. “In general, they want us to stay away from you guys,” said the anonymous student.

But why even flirt with censorship in the first place?

Georgia State is a typical example of what can happen when school officials are more worried about their school’s image than about students’ free expression. Administrators should realize that students want their rights protected and that the illiberal handling of The Urbanite is likely to frustrate their efforts to build relationships with students. It should also serve as a warning to students to be skeptical when administrators advance pretextual content-neutral reasons for restricting student expression — especially when that expression just happens to be viewed disfavorably by the administration.