A speech by Breitbart editor Milo Yiannopoulos was cancelled at the University of California, Davis on Friday, with campus officials and the Davis College Republicans disagreeing over precisely why the event was cancelled.

Earlier in the week, Yiannopoulos announced he would be joined at the event by former pharmaceutical executive Martin Shkreli. Shkreli, who became a household name in 2015 after his company raised the price of the anti-parasitic drug Daraprim 5,000 percent, is currently out on bail after being charged with securities fraud. A petition signed by hundreds of students and faculty members “demand[ed] that that UC Davis administrators remove Milo Yiannopoulos’ platform for spreading hate and bigotry on our campus.”

Leading up to the event’s 7:30 p.m. start time, protesters had blocked access to the event venue and chanted slogans. Thirty minutes before the event was supposed to start, the College Republicans called off the event, with the group’s Executive Director Andrew Mendoza citing safety concerns. 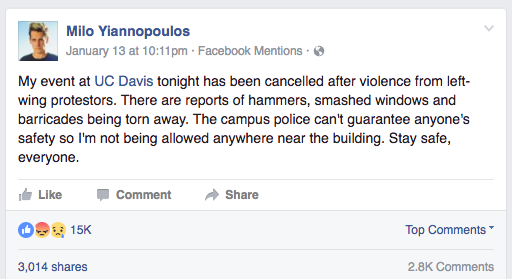 Later that day, the UC Davis administration issued a statement disputing Yiannopoulos, saying that “[d]espite some reports, there were no broken windows or other property damage during the protest.” The statement also attributed the cancellation to a decision by the College Republicans, and expressed disappointment with the outcome:

“I am deeply disappointed with the events of this evening,” said Interim Chancellor Ralph J. Hexter. “Our community is founded on principles of respect for all views, even those that we personally find repellent. As I have stated repeatedly, a university is at its best when it listens to and critically engages opposing views, especially ones that many of us find upsetting or even offensive.”

But on Sunday, the College Republicans said on their Facebook page that they were pressured into the cancellation by a school administrator and the police chief:

We were under intense pressure from Milton Lang, the Associate Vice Chancellor for Student Life, Campus Community and Retention Services, as well as the Chief of Police. Lang told us that there were hammers confiscated from the protesters … The chief of police confirmed Milton’s statement and informed us she was worried for the safety of her officers.

The group wrote that “[w]ith the police stating that they were unable to defend us, DCR had no choice but to cancel.”

The College Republicans also questioned UC Davis’ claim that there had been no property damage or disruption accompanying the protests, noting that news reports had mentioned fights and someone pouring coffee on a photojournalist. Martin Shkreli was also allegedly hit with thrown feces. (Language at the links and in videos above may not be appropriate for some workplaces.)

While Americans have a First Amendment right to protest controversial speakers and demand that they be banned or silenced, our government also has a responsibility to ensure that these attempted “hecklers’ vetoes” do not succeed. That’s especially true at colleges and universities, which are intended as places where controversial ideas can be debated and discussed. When violence, or the reasonable fear of violence, is allowed to short-circuit that dialogue, we all suffer, regardless of whose “fault” it is.

FIRE is investigating the situation.