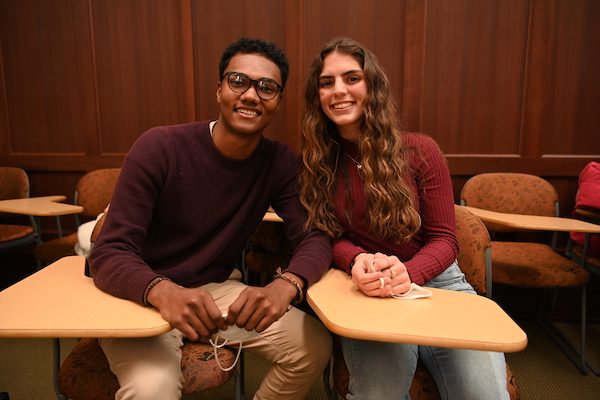 On Jan. 27 at 7:00 p.m., more than 20 students at The College of Wooster met for the first time to discuss free speech and specifically, whether there should be limits to free speech. The event was hosted by the college’s new civil discourse organization: The John Stuart Mill Forum, co-founded by Wooster students Dylynn Lasky and Bobby Ramkissoon. The group’s first meeting demonstrates the huge potential that civil discourse organizations have to empower students to engage productively with their peers about society’s most pressing issues.

Describing the event, Ramkissoon said that it was “a religious experience” to be “in that space and listening to the conversations that were actually being had and people being so vulnerable with one another.” It was exactly the kind of experience that he had hoped would be a central part of his college education.

Lasky was overjoyed to witness her peers’ willingness to work to understand each other’s points of view, even in the midst of difficult discussions. “At the end of the meeting, there was a genuine shared understanding of others’ views. I feel like people left with more empathy for others and that was a shared genuine experience.”

Lasky and Ramkissoon were disheartened to find that the college environment did not foster the free exchange of ideas.

Lasky and Ramkissoon were motivated to found The John Stuart Mill Forum by their shared conviction that a student’s university years should be all about ideological exploration, propelled by deep thinking both in and outside of the classroom. Their ideal of a healthy intellectual culture in higher education is one that promotes and encourages a free marketplace of ideas, where students share their own perspectives and are challenged by those of others.

After entering college, Lasky and Ramkissoon were disheartened to find that the college environment did not foster the free exchange of ideas. They had entered a campus culture that, far from encouraging students to challenge each other’s perspectives, actively discouraged the intermingling of ideologies, provoking fear of the collision of differing viewpoints. This disturbing realization was informed by the stories they heard from their peers, as well as incidents they themselves experienced, in which students’ speech was either silenced or severely chilled. 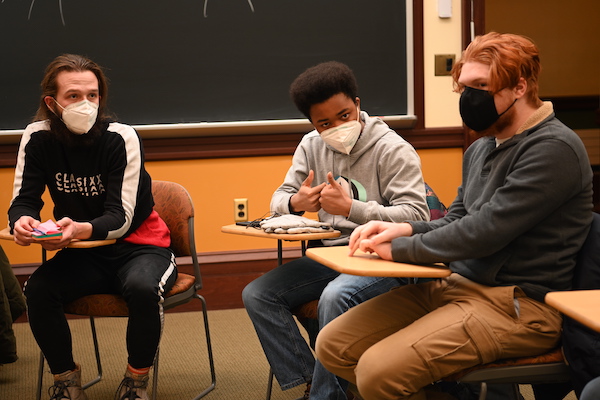 Students attending the inaugural meeting of The John Stuart Mill forum at The College of Wooster on Jan. 27, 2022.

“Instead of a free marketplace of ideas,” Bobby explained, “I got more of a singular pushcart of an idea.” But while Lasky and Ramkissoon may have been handed a pushcart when they began college, they are working to develop a marketplace.

Dylynn and Bobby’s civil discourse journey began at the 2021 FIRE Summer Conference, when they attended a session about FIRE’s Let’s Talk program, which provides students with the  resources they need to lead open discussions about controversial issues. Inspired by the program’s ideals, Lasky and Ramkissoon went back to their campus determined to create a space for their peers to talk openly with each other about ideas that matter.

As they prepared to found The John Stuart Mill Forum, Lasky and Ramkissoon discovered that Wooster was not completely lacking in discourse. Great conversations were happening, but they existed entirely within, as Bobby put it, “tiny pockets” or “smaller organizations.” So Lasky and Ramkissoon visited these organizations. They went to the meetings of many of these groups: Leftists of Wooster, College Republicans, College Democrats, African Student Union, Women of Images, and the Black Student Union.

Ramkissoon and Lasky wanted the kinds of civil and profound conversations that were happening within these small groups on campus to happen between the groups as well. Bobby and Dylynn believe that the pathway to a culture of open dialogue on campus begins with the clash of these isolated groups’ different ideas and perspectives within a civil environment. And they want to be the arbiters of that productive clash. “We realized that there is a need on campus,” Ramkissoon explained, “for a space outside the context of a classroom for ideas to be contested and for people to freely express those ideas without fear of social ostracization or outright censorship or repercussions from the administration.” Thus began the creation of The John Stuart Mill Forum.

Using Let’s Talk resources, Lasky and Ramkissoon put together a charter for their new student organization and began the process of becoming an official student group, a process that took most of the 2021 fall semester. Finally, in the first week of December, The John Stuart Mill Forum became an officially chartered organization.

On Jan. 27, the group held its inaugural meeting. Prior to the meeting, Lasky and Ramkissoon prepared meticulously. They created an outline, complete with the four corners game from FIRE’s “Let’s Talk: Conversations on Campus” guide, questions organized by the Let’s Talk program’s heat escalation rubric, and a series of scenarios to spark discussion that were also based on the Let’s Talk heat levels.

The first meeting’s central topic was “Should there be limits to free speech?”, which launched The John Stuart Mill Forum’s participants into a thoughtful and nuanced discussion about one of the hottest topics on university campuses today.

Students discussed the definition of safety, whether there should be limits to free speech that protect the safety of students on campus, and even whether students should be allowed to debate the topics of gender pronouns and trans identity (a conversation included in an article in The Atlantic magazine that explores the efforts of students across the country who are standing up for civil discourse on university campuses).

One of the biggest lessons that Lasky and Ramkissoon learned from the event was that fruitful and productive conversations do not have to be scrupulously outlined beforehand.

There were points during the conversation when Lasky and Ramkissoon were tempted to intervene. Ultimately, the discussion never reached that point. According to Ramkissoon, he and Lasky “didn’t really need to intervene all that much because it resolved itself through good conversation. Yes, people were emotional and people were angry. But it expressed itself in a way that was productive.” In other words, Lasky, Ramkissoon, and their group’s participants learned one of the most important lessons of civil discourse: Authentic engagement about difficult issues is possible between individuals acting in good faith who remain in contact with their desire to learn from one another about their differing perspectives and experiences.

The effect of the event spread beyond the discourse space that Lasky and Ramkissoon created for their peers on Jan. 27.

Lasky and Ramkissoon talked about how participants stayed behind after the meeting ended to talk with one another, even though the conversation had undergone some highly intense and emotionally difficult moments. Ramkissoon described his and Lasky’s surprise: “Where [the conversation] was going, I thought there’s no way. People are going to walk out and just never want to see each other ever again. But by the end, it ultimately resolved itself, and to a point where people stayed longer to discuss with one another again.” 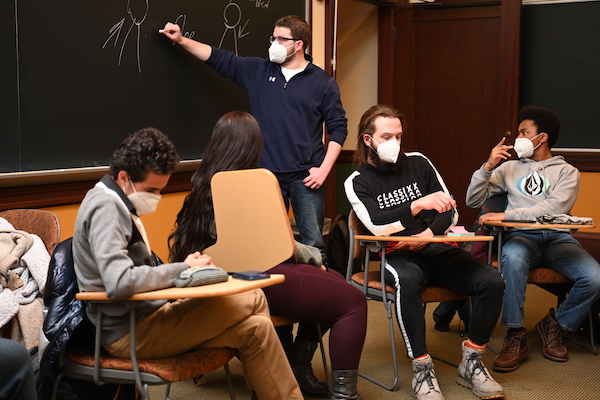 Students engaged in discussion at the inaugural meeting of The John Stuart Mill forum at The College of Wooster on Jan. 27, 2022. Describing the event, cofounder Bobby Ramkissoon (not pictured) said it was like “a religious experience” to be “in that space and listening to the conversations that were actually being had and people being so vulnerable with one another."

One of the biggest lessons that Lasky and Ramkissoon learned from the event was that fruitful and productive conversations do not have to be scrupulously outlined beforehand. The group ended up not discussing most of the questions they had prepared. And yet, the conversation was incredibly rewarding for all involved. “I think we had to remind ourselves a lot that civil dialogue isn’t structured,” Lasky said. “We were scared of how organic it was going to be,” Ramkissoon added. “We wanted structure because it was scary in the beginning. But because people felt free to provide their own opinions, propose topics or questions on their own fruition, then I think it ended up being more organic. Scary in the beginning, but really useful in the back end.”

Ramkissoon and Lasky intend to continue to tackle challenging topics and, as they pointed out, The John Stuart Mill Forum’s mission statement includes both politics and culture. “There’s so much conversation about politics,” Ramkissoon said, “but there really isn’t a lot of conversation about the big ideas. Or about things that people really really care about — like the meaning of life or about the existence of God. All that stuff, everyone has opinions about but very few people have the opportunity to actually express those opinions and to talk about them to one another.”

As a forum for both politics and culture, The John Stuart Mill Forum will address many issues, and most of them will probably cause some discomfort. But all of them will bring students together to learn from one another.

Students who would like to learn more about FIRE’s Let’s Talk program should check out the resources online and get in touch with us with any questions by emailing students@thefire.org.