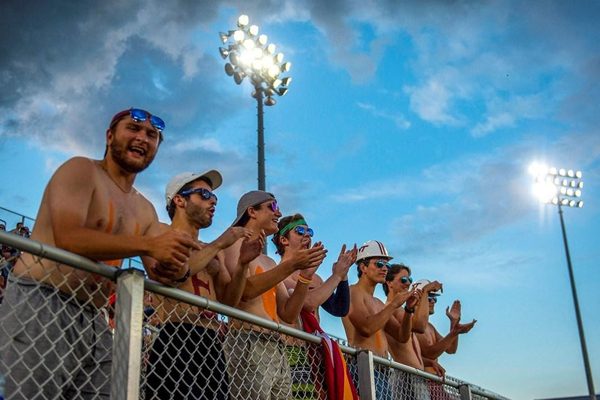 On penalty of suspension and a ban on attending athletic events, the university punished student Sean Lohr after an athletic administrator took offense to his booing during a soccer game.

Today, the Foundation for Individual Rights in Education called on Virginia Tech to stop violating its legal obligations and clear Lohr’s disciplinary record.

“The Virginia Tech administration was completely out of line,” said Lohr. “It is out of line for everyone’s voices to be suppressed because one person was offended by something.”

Lohr is a member of the “Shirtless Boys,” a student group that cheers on Virginia Tech’s women’s soccer team. The group has been praised by the women’s soccer team coach for their “tremendous influence” on the club by “increasing the atmosphere and the passion within the fan base.”

During and after several games throughout the fall semester, Senior Associate Athletics Director Reyna Gilbert-Lowry asked the group to “tone it down” when cheering in the stands—a strange request to fans cheering their home team in a large, outdoor soccer arena.

In response to a foul call at a match on Sept. 26, many fans booed and shouted at the referee. Lohr joined in by yelling “what?!?” several times at the official. In response, Gilbert-Lowry approached the Shirtless Boys and asked them to quiet down. Lohr asked her what she meant, and she then directed campus security to remove the students from the event. Before security arrived, Lohr called her “a glorified PE teacher,” and encouraged the crowd to steer its derision toward her. The crowd jeered Gilbert-Lowry as security removed the boys from the match.

Gilbert-Lowry then filed a disciplinary complaint against Lohr, prompting Virginia Tech to summon Lohr to an Oct. 22 hearing where he was found responsible for “Disorderly or Disruptive Conduct.” The university directed him to have no contact with Gilbert-Lowry and required him to write a “Letter of Acknowledgement and Community Impact.” If Lohr flouts any of these directives, or violates any other university policies, he will be suspended and banned from attending university athletic events through Lohr’s impending graduation later this month. The university says the “decision is final” and there is “no opportunity for appeal” because Lohr has not suffered a “loss of privilege.”

“Virginia Tech punished Lohr for supporting his home team because one single administrator was offended,” says FIRE Senior Program Officer Zach Greenberg. “If booing a referee is disorderly conduct, there would be no fans left to cheer on Virginia Tech’s student-athletes.”

As a public school, Virginia Tech is required to uphold students’ First Amendment rights. Virginia Tech’s deferred suspension of Lohr contradicts this obligation, as cheering for a sports team is protected expression. While a university can address disorderly conduct, expression can only be punished as “disorderly” when there is a showing of material and substantial disruption. This determination requires more than merely offending an administrator or a referee.