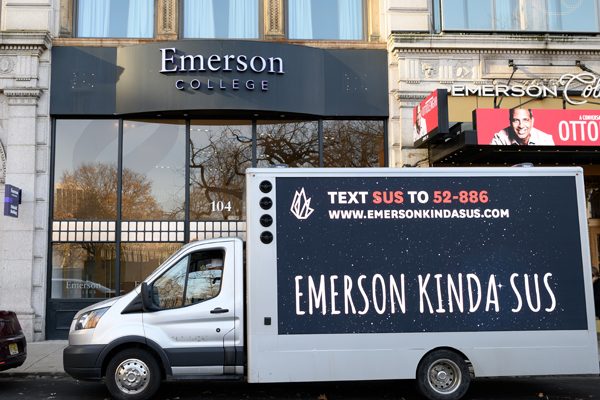 BOSTON, Jan. 19, 2022 — Boston has a long history of criticizing government power, but Emerson College is silencing its students’ ability to do just that.

In response, the Foundation for Individual Rights in Education has launched a series of ads, appearing on the city’s transit system and on mobile billboards, that will criss-cross Boston to call out Emerson’s attempts to censor and squelch free expression on campus. Their message? “Emerson Kinda Sus.”

Members of the campus chapter of Turning Point USA passed out stickers featuring a hammer and sickle with the caption “CHINA KINDA SUS” — slang for “suspicious” — in September. In response, Emerson investigated and suspended the group, and called the stickers “anti-China hate.”

“I was born in Singapore,” said KJ Lynum, vice president of the group. “So to be called anti-Asian was very strange.”

FIRE, based in Philadelphia — another city that’s also no stranger to healthy criticism of government — contacted the college on Oct. 5 to remind it that “freedom of expression entails the right to criticize not only our own governments, but those of foreign nations, even when that criticism is offensive.”

In its investigation, Emerson concluded that TPUSA “did not intend to target anyone other than China’s government,” yet the university found the group responsible for creating “a hostile, intimidating or offensive working, living or learning environment.” Emerson put a “formal warning” on TPUSA’s record and denied the group’s subsequent appeal, leaving it no recourse.

The ads point viewers to EmersonKindaSus.com, a website recently launched by FIRE, where they can read the full story.

FIRE aims to bring attention to Emerson’s failure to tolerate free expression and to live up to its policies, which emphasize “the high importance” of the First Amendment. (Heck, its motto is “Expression Necessary to Evolution”!)

The mobile billboard will circle Emerson’s campus on Jan. 19-20. The subway ads at Boylston and Tufts Medical will be up until at least Feb. 14.