FIRE > Newsdesk > Top Story > When it comes to free speech, good policy is not enough 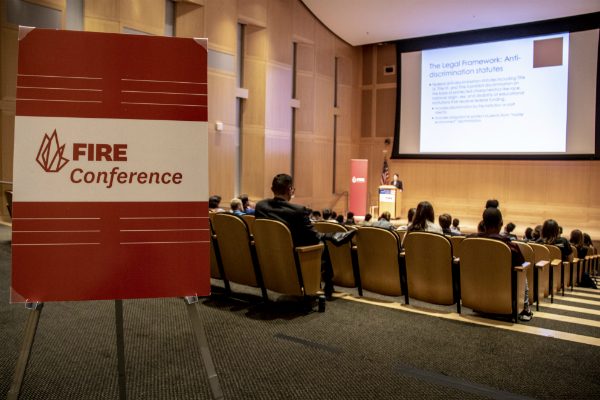 For Laura Disney,  an attendee at FIRE’s 2019 Student Network Summer Conference, promoting a culture of diverse opinions on campus requires more than speech-friendly policies. It also requires an active effort on the part of students to create a space in which all views can be aired and heard. Disney, a University of Kentucky law student and former undergraduate student body president, spoke about the importance of student-to-student efforts to encourage diversity of viewpoint on campus.

“As student body president [at Eastern Kentucky University], I made sure that no matter what a student’s opinion was, that I expressed it, even if I didn’t share that opinion,” Disney said. “Because I do believe that … everyone should be able to express [their] opinion, of course within certain bounds.”

“As student body president,” she said, “I did my best to make sure that everyone’s opinion was shared.”

In the United States, the First Amendment guarantees — among other assurances — freedom of speech. But the practice of free speech calls for more than the right to be free from the suppression of speech by authority. It is also a call to action —  not to silence others, but to actively seek them out and really listen to their ideas. A culture of free speech requires citizens to be brave, to boldly engage with those whose words they find offensive, to hear them out respectfully and to explain why they disagree. We should be making arguments, not hurling insults; building bridges, not walls. Students like Disney have it right: They fight for formal policies which honor the First Amendment on campus, but they also seek to create an environment among the students that  encourages respectful engagement and diversity of thought.

Lorenzo Megs, another conference attendee, is a rising junior at Bowdoin College studying government and philosophy. He also expressed concern about the impulse of campus community members to shut down speech rather than engage with it. In fact, Megs identified this trend as the primary threat to free speech on Bowdoin’s campus.

At too many schools, the student culture promotes self-censorship by shunning those who disagree with majority viewpoints.

“I think in terms of the level of administration, there really aren’t that many issues with free speech,” he said. “The issues around free speech on campus are the more difficult issues which aren’t the legal issues — it’s what level of ostracization people [feel] around expressing their ideas.”

At too many schools, the student culture promotes self-censorship by shunning those who disagree with majority viewpoints. These social consequences can be just as powerful as formal policies which discourage dissenting speech. Advocates of a free speech culture should pay attention to this trend. When honored, the First Amendment’s guarantee of free speech protects our right to create space for discourse of various viewpoints on public campuses, while promises of free speech serve the same function at private colleges. But avoiding official censorship is not, by itself, enough. Campus culture must also change, with students internalizing a sense of what it means to participate in a liberal democracy with an authentic and free marketplace of ideas.

Even some schools that have “green light” ratings from FIRE may have work to do before they achieve an actual culture of free speech and open debate. On May 16, 2018, for example, the University of Chicago’s branch of Students for Justice in Palestine (SJP) set up an installation of 70 flags, “each with a fact about Palestine, Israel, and the Nakba” in order to “mark the 70th anniversary of the Nakba.” By 3 p.m. that day, the installation was vandalized and by 1 a.m. the next morning, all the flags had been stolen.

According to The Chicago Maroon, SJP “has consistently been the target of both organized and individual harassment and disruption” which has consisted of intimidation tactics ranging “from impersonation and defamation to sexual harassment and threats against loved ones.”

On May 17, 2018 at the University of California Los Angeles (UCLA), another green light school, dozens of anti-Israel student protestors violently interrupted a discussion panel put on by UCLA’s Students Supporting Israel (SSI) organization. The protestors shouted slogans like, “[J]ustice is our demand, no peace on stolen land,” and “[W]e don’t want two states, we want ’48”. One of the protesting students even ran up to the panel of speakers, ripped down an Israeli flag that was hanging behind the speakers, threw it to the ground, and yelled straight into one of the panelists’ faces. SSI’s board members tried to engage the protestors in the conversation, “even inviting them to hang the Palestinian flag in a place of honor and attend a dinner that was being provided by SSI for attendees of the event.” The protestors, however, refused these offers and continued to yell and intimidate the panelists and attendees of the event until they were removed by campus police.

These are classic silencing tactics by fellow students, aiming to suppress the speech of a group on campus. No matter how heinous they may find an opinion, when students attempt to silence unpopular opinions rather than effectively argue against them, they threaten the values the First Amendment was meant to protect. The use of such tactics at schools like the University of Chicago and UCLA, which are well-known by now for protecting free speech in their policies and practices, indicate that despite the many measures they have taken to ensure free expression on their campuses, they have not yet achieved cultures that fully embrace it. The presence of silencing and intimidation tactics at green light schools like these indicates that free expression on campuses must be encouraged by more than policy. It must include real culture change.

The way to encourage real discussion on campus is to seek out people with whom you know you disagree!

So how, as students, can we make that change happen and combat the threat that social censorship and intimidation pose to speech?

According to Disney — the University of Kentucky law student who spoke at FIRE’s conference — the way to encourage real discussion on campus is to seek out people with whom you know you disagree! (FIRE President Greg Lukianoff often says the same.) And the buck does not stop with individual students. Student groups can also play a role.

“Organizations, not just student government but any student body group or program, can have events where they talk about issues in a civil manner,” Disney said. These groups can set an example for others on campus.

This summer students came to FIRE’s 2019 Student Network Summer Conference to engage with and learn from one another, and to gain the tools they will need to be an advocate for First Amendment issues on their own campuses. They exemplified what it means to be a community that lives according to its free speech principles. And that’s where change on college and university campuses can really start — with students who care about learning from ideas that are different from their own. Freedom of speech is more than a right. Archer Thomas, a conference attendee and rising junior at Bowdoin college, put it well: Free speech is about “clearing the space for truth.”

Elizabeth Stanley is a rising junior at Kenyon College and a FIRE summer intern.