A Wisconsin legislator’s threat yesterday to cut the University of Wisconsin System’s budget over an “obscene” course reading assignment is the latest salvo in what is becoming a years-long war between the university and state lawmakers over academic freedom.

State Senator Stephen Nass made the remarks in an email he sent Thursday to email lists for Republicans and Democrats in Wisconsin’s Senate and Assembly. In it, he criticized a reading assignment lecturer Jason Nolen gave in his UW-Madison sociology course titled “Problems of American Racial and Ethnic Minorities”: 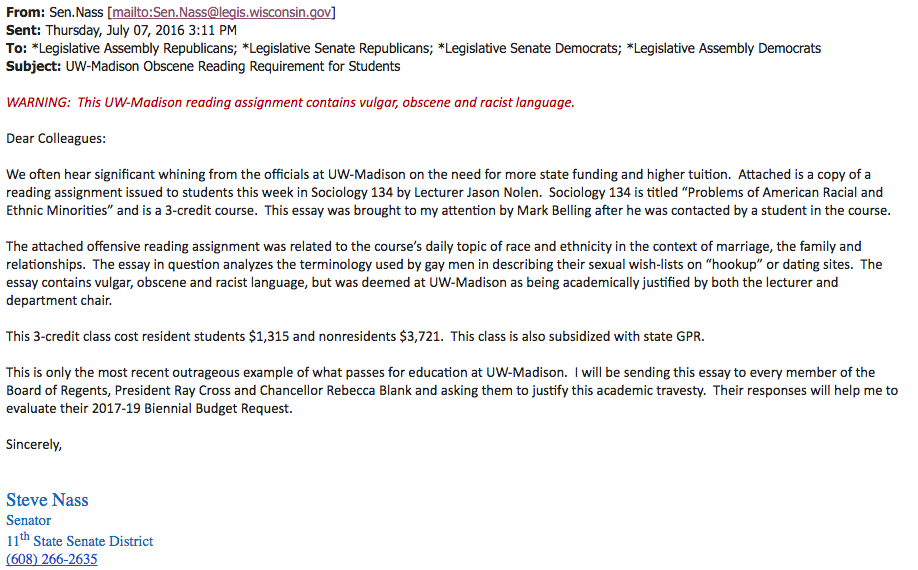 The reading assignment sparking Nass’ ire is the 2011 essay, “Not just a preference,” which ran in the now-defunct Canadian magazine fab. The essay’s author, Alex Rowlson, argues that the preferences and language used in gay hookup profiles “seem[] to signal that the culture of sexual liberation has been replaced by sexual segregation,” and he concludes:

Words can beat people down, but it’s within our power to change how we frame our desires, and even to change our desires to create more inclusive screwing. By challenging ourselves and others we can expand our desires. So go out there and be indiscriminately promiscuous. Or deny that bigoted beefcake a hookup because of his prejudiced profile.

UW-Madison Sociology Department Chair Pamela Oliver responded to FIRE’s request for comment with a public statement she sent to Nass, describing Nolen as a popular, “award-winning” instructor whose teaching extends to the topic of sexual racism. Oliver defended the fab magazine piece as “material [that] appropriately pushes boundaries in order to spark discussion” on that topic.

“Among adult college students,” Oliver wrote, “analyzing how people talk about sexuality is considered appropriate material.” She quoted from Nolen’s course syllabus in which he explains his choice of material:

Most people have not had much practice talking about race and ethnicity, and some of the topics we will explore are controversial.

Participation will likely feel uncomfortable at times – both as a speaker and as a listener – but productive conversation is the goal. It is crucial that we all remember that every person is living with a race and ethnicity (and sex, gender, sexual orientation, class, size, belief system, nationality, etc), and each person’s individual perspective is relevant to our conversation.

Senator Nass’ comments reflect larger tensions between the state’s university system and the legislature. Lawmakers not only dealt the UW System a $250 million budget cut last year but also moved to weaken tenure protections and UW’s somewhat unique shared governance plan in which staff, faculty, and students “all take part in making significant decisions concerning the operation of the university.”

University of Wisconsin Professor Emeritus Donald Downs, who spent his career fighting for free speech and academic freedom at UW-Madison, told FIRE that Nass’ most recent comments are deeply troubling in light of what’s been going on at UW in recent years. His comments, via email, describe both what has happened at UW over the past year and what remains at stake:

The legislature has already done a lot to seriously affect the university over the course of the last year, the long term consequences of which have raised valid concerns, though these perhaps remain to be determined. Financial assistance has been cut big-time, we have lost the guarantee of shared governance, and the status of tenure has been modified. Threatening further cuts because of disagreement with the content of one course reading raises even more serious concerns, as it cuts to the core of academic freedom.

I disagreed with a lot of what my colleagues assigned as readings while I taught here, and I assume many of them felt the same way about my assignments. Such is the nature of a university. And though I have been very public about critiquing the lack of intellectual diversity at UW-Madison and higher education in general, I have never threatened the right of a colleague to teach as he or she saw fit.

But once the legislature sticks its nose into what is taught, one of the four traditional pillars of academic freedom is directly challenged: the right of the instructor and institution to determine what may be taught. (The others are the right to determine on academic grounds who may teach, how it shall be taught, and who may be admitted to study.)

I would be very surprised if the legislature went along with this, but the threat alone is improper.

FIRE agrees. It should come as no surprise that a sociology professor might want to share material about a debate within the gay community while discussing the different forms that racism might take. That adult students might be exposed to views that might shock, offend, or intrigue, and might thereby be encouraged to discuss controversial issues, is a feature—not a bug—of academic discourse. The threat to academic freedom when state legislators micromanage classroom content is grave. FIRE urges all legislators to resist the temptation to enforce their personal sensibilities on classrooms by threatening institutions with budget cuts. Academic freedom cannot flourish under those conditions.