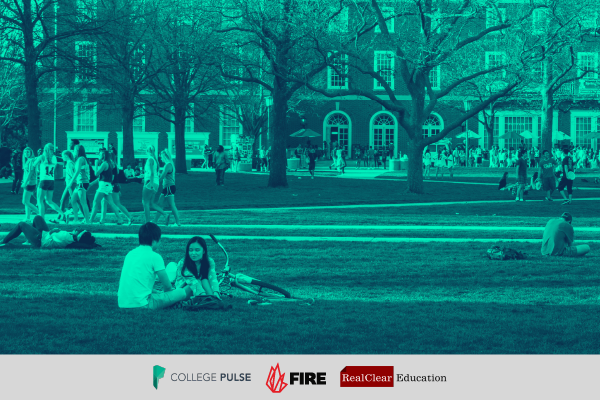 Last week I answered a number of questions from the online webinar where FIRE Executive Director Robert Shibley and I summarized why we created the 2020 College Free Speech Rankings and some of its important findings. This is the second in a series that answers some of the questions we were not able to address during the webinar, for part I see here. A number of these questions were about our sampling methodology. Our survey partner College Pulse offers a detailed description of their sampling methodology, and I encourage people to read through the information provided there. However, I address some of the more specific questions in regards to sampling that we received during the webinar below.

I asked College Pulse these questions and Anne Schwichtenberg, my co-author on the 2020 College Free Speech Rankings report, provided the following answers:

We recruit students through mainly word of mouth marketing, but also do need to do targeted recruiting to fill panels from specific universities where we haven’t met a minimum, and for that, we’ll use targeted email marketing or social media outreach.

Students are incentivized to take surveys, mainly through Amazon gift cards for completion.

We can’t ensure first generation student status, but we do weight the data accordingly to be nationally representative of four year college students based on the current population’s enrollment in four-year universities according to the following levels:

Voter registration status is a way to “back into” socioeconomic status (SES) and is admittedly an indirect measure, but as you know, frequently correlated with SES. We have asked students in surveys about their first generation status but do not collect this as a demographic variable.

In addition to Anne’s responses I will note two additional points. First, 97% of college students own a smartphone. Second, all of College Pulse’s surveys can also be completed on their website by anyone who uses the internet, a category that includes roughly 90% of American adults.Thus, we are confident that College Pulse’s outreach and marketing should be able to reach a large cross-section of all college students enrolled at 4-year institutions within the United States.

How do online samples differ from traditional telephone survey methods?

The internet has revolutionized the polling industry. For decades most public opinion polling organizations have relied on samples obtained via telephone surveys using random digit dialing. Over the past 20 years, the response rate for traditional RDD surveys has consistently declined and is now less than 10%, so online surveys are becoming increasingly prevalent. It is important to note, here, that by “online surveys” we do not mean the equivalent of a Twitter poll or a web survey that anyone can take; rather, we are discussing professionally administered surveys to large panels such as those performed by YouGov, the Pew Research Center, and (in this case) College Pulse.

This does not mean that online surveys do not have their own drawbacks. The main one is that it is impossible to use them to systematically collect a traditional probability sample of the general population. Because of this, College Pulse applies a post-stratification adjustment based on a number of attributes, such as race, gender, class year, voter registration status, and financial aid status obtained from multiple data sources, including the 2017 Current Population Survey , the 2016 National Postsecondary Student Aid Study, and the 2017-18 Integrated Postsecondary Education Data System. This post-stratification weighting–the standard practice in surveys of this type–helps ensure that the demographic distribution of the sample matches the national population of college students.

How many student responses did you get from each school?

We provided this information in the appendix of our full report, but I am including that table below:

Why did you survey these specific 55 colleges? Why wasn’t [insert college name here] surveyed?

One important factor that impacted if we surveyed a college or not was whether College Pulse considered the panel of students at that school large enough for us to obtain an adequate sample. For instance, given how publicly supportive Purdue University’s administration has been of free speech and expression on campus, we would have liked to include it. However, there were not enough Purdue students enrolled in College Pulse’s panel to be comfortable with the results. This was the main reason for not including some colleges that one might expect in this initial round. If we are able to administer the survey again and produce a new set of rankings, one of our primary goals is to significantly expand the number of colleges surveyed. After all, the number one reason more schools weren’t included was (of course) the cost of doing so — so please feel free to support FIRE if you’d like to see more work like this!

I hope that this piece answers the main questions regarding our sampling strategy and method. In my next piece, I will address more specific questions about the survey items themselves, with a particular focus on the items that make up the tolerance factor of our rankings.