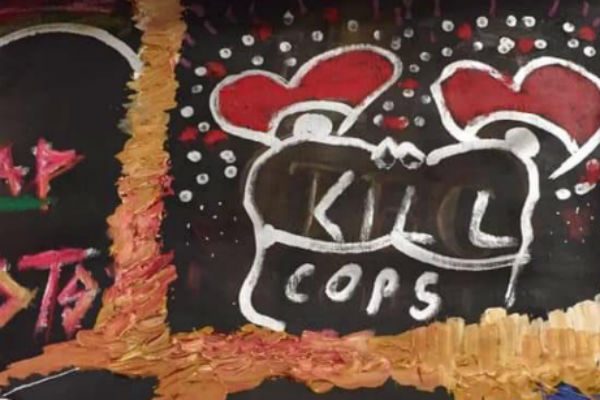 At Pennsylvania’s Allegheny College, a student chose to take down his painting after it provoked controversy both in and outside of the campus community.

The anonymous student’s artwork, visible in a public “workspace for students to work on their class projects,” depicts graffiti and vandalized phrases like “Big Cat,” “Alien Luv,” “Clap Thots,” and “Kill Cops.” Unsurprisingly, the last phrase, “Kill Cops,” is what drew the most attention online and, reportedly, from college employees. The “intent from the artist is to call for an end to mindless violence and the language that leads to it,” according to Allegheny College, “just the opposite from the context being circulated on social media.”

In a Feb. 24 post on Facebook, Crawford County Prothonotary Emmy Arnett tagged the college, writing, “Shame on you Allegheny College for allowing this to hang on your walls.” In response to claims that the work had been misunderstood, Arnett later added, “Whatever the context, it says, ‘kill cops.’” After the work’s removal, the Meadville City Police Department’s Fraternal Order of Police also posted on Facebook that they were “disappointed” the work had been allowed on display in the first place and stated that “[f]reedom of expression does come with consequences”:

In response to the “artwork” that was displayed at Allegheny College….. Maybe the artist had good intentions. Art is open for individual interpretation. However…. Freedom of expression does come with consequences. It is known that some employees of Allegheny asked administrators for the picture to be removed because of the Kill Cops portion. Their request was ignored even with a warning that the depiction could be inflammatory.

We have attached the entire picture of the artwork, not just the specific portion. You can judge the “context” of this work. It has been removed from public display. We have also attached the official Allegheny College explanation. Disappointing that this was displayed, more disappointing that it took so much outcry for it to actually be removed. To everyone that supports law enforcement, thank you so much for your continued support.

FOP Lodge 97 is correct that free expression does come with consequences, but it leaves ambiguous what those “consequences” are. This is a common trope, a truism that fails to identify what “consequences” the speaker endorses while often serving as a refrain invoked to excuse illiberal “consequences.” Criticism, a form of “more speech,” is one form of unobjectionable consequence: An artist is free to create works that send a message, and viewers are free to express their response to it, whether it’s praise or disgust. But at a college committed “to the principles of free speech and inquiry,” as Allegheny claims to be, censorship or punishment cannot be consequences to controversial artwork. In pondering why administrators failed to remove the work, the police union strongly suggests censorship would be a just consequence.

Law Enforcement Today added commentary on the work as well, claiming, “Free speech and the freedom of expression are rights, but hate speech is not protected. There should be consequences for this type of behavior.” (There is no “hate speech” exception to the First Amendment, and, in keeping with its promises, Allegheny could not punish a student simply because his artwork caused offense.)

In a Feb. 25 statement to the Meadville Tribune, Allegheny officials wrote that the student chose to take down the work:

The student artist, the Art Department, and Allegheny College do not condone violence toward police or anyone else. A photograph of a small portion of a large-format artwork in a studio space on the Allegheny College campus has been shared widely on social media. The space, located in the Art Department, is a workspace for students to work on their class projects. This space is not a gallery; the pieces in that space are not part of a formal exhibit. The artwork in question, when viewed fully, documents an urban street scene.

The intent from the artist is to call for an end to mindless violence and the language that leads to it, just the opposite from the context being circulated on social media. But, because of this unintended consequence, the student artist has removed the piece from the public access area. To further this conversation, the Art Department and the artist will offer a panel discussion to the campus community later in the semester. The College will also continue to review its policies and procedures, always with the goal of living all of the values articulated in our Statement of Community.

If the student’s choice to remove his work was not encouraged by the college and the administration stood by its free speech commitment, then Allegheny made the right call. And its plan to host a panel discussion with the artist suggests an effort to engage in more speech in the face of pressure to allow less of it. As FIRE explains in our 2018 report on art censorship, universities too often allow controversy to act as curator.

However, the suggestion that Allegheny “will also continue to review its policies and procedures, always with the goal of living all of the values articulated in our Statement of Community” raises concern. Vague pronouncements about reviewing “policies and procedures” in the face of art controversies at best lead to confusion about what rules may change and why, and at worst suggest outrage can dictate how universities, and the rights of their students, are managed.

FIRE will continue monitoring the situation to ensure that Allegheny College stands by its commitment to free speech.