At one time, the University of Mississippi was the setting for one of the most infamous efforts to keep public schools racially segregated. Today, with more than 50 years separating it from that grim past, Ole Miss is gaining notoriety for its sweeping efforts to foster diversity and inclusion on campus. And administrators say it’s an oft-overlooked ally helping make those important changes on campus: Free speech.

“We do have a difficult history as a state, and certainly as a university,” Associate Dean of Students Valeria Beasley-Ross acknowledged in an interview with FIRE. 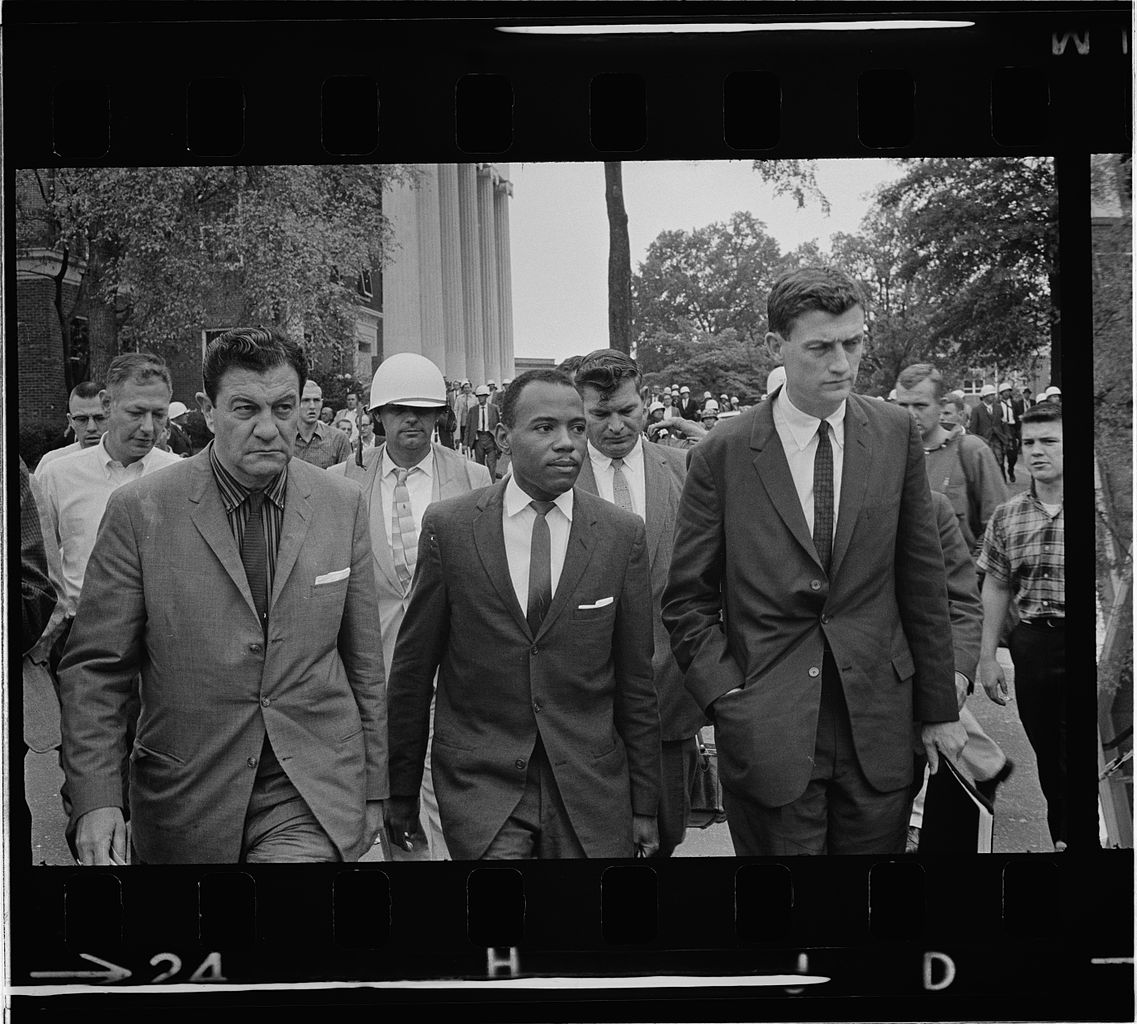 Perhaps the most difficult moment in that history came in 1962, when James Meredith became the first African American to attend Ole Miss. It was almost a decade after 1954’s Brown v. Board of Education outlawed public school segregation, but racial tensions still simmered in the South and some states—including Mississippi—refused to comply with the federal law. The state’s then-governor, Ross Barnett, swore that “no school will be integrated in Mississippi while I am your governor.” But President John F. Kennedy had different plans, and sent the U.S. Marshals to escort Meredith onto campus. That sparked one of the most violent confrontations ever to occur on a college campus, with riots breaking out in protest of Meredith’s admission. Two people died in the melee, and more than 100 deputies were injured.

Meredith ultimately began classes, but required a 24-hour security detail until the day he graduated to protect him from relentless taunting and pelting with water balloons and garbage. 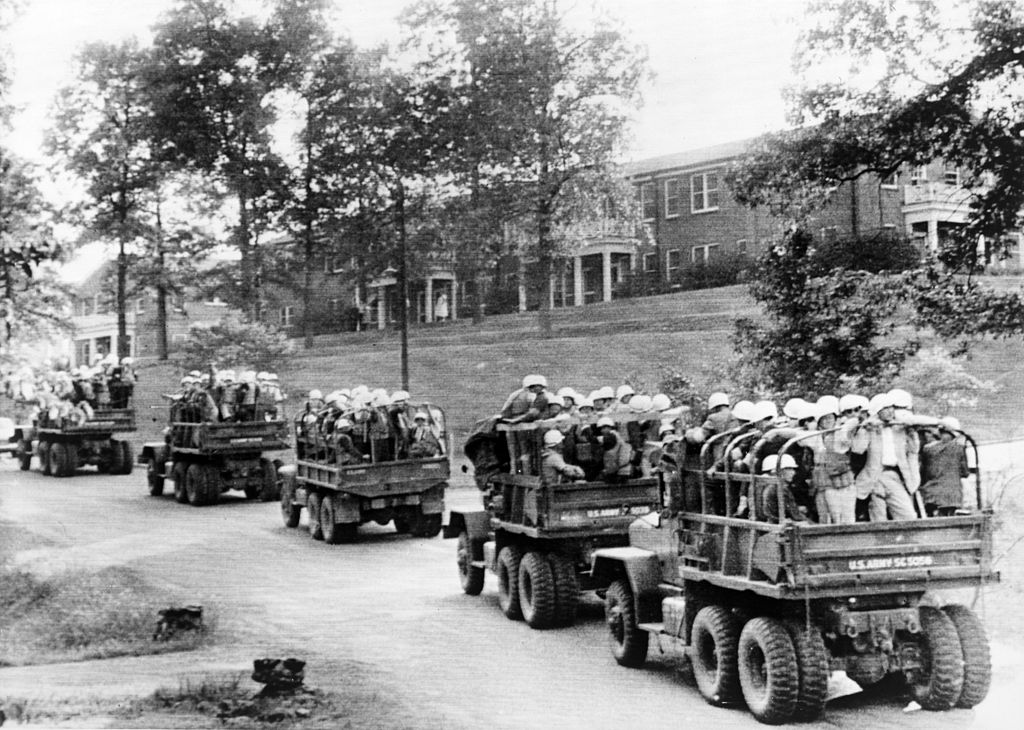 It was a dark time.

But today is a brighter day at Ole Miss. 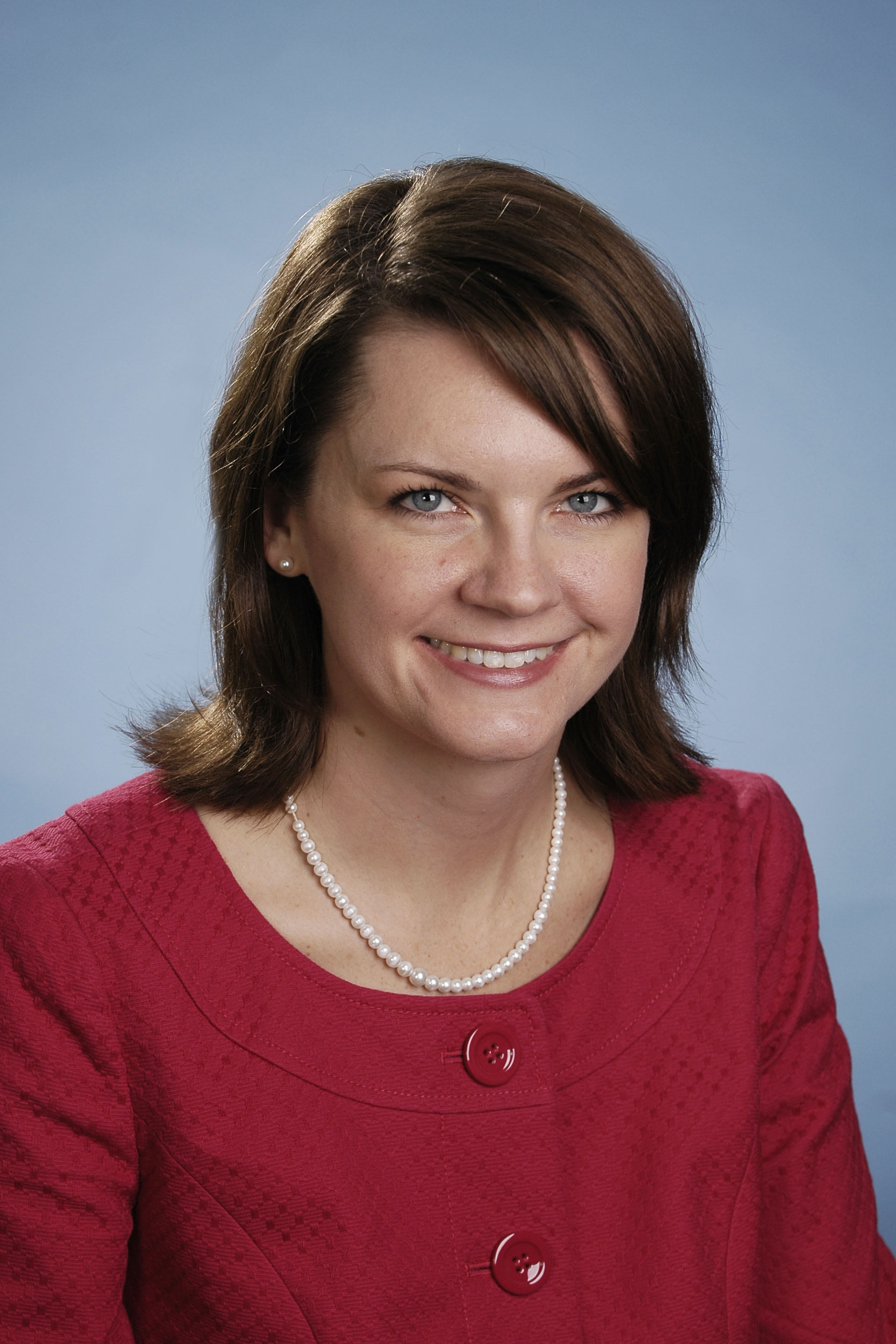 “The university has consistently been working, especially in the past decade, two decades, three decades, to really make this a more inclusive place,” Melinda Sutton, Assistant Vice Chancellor for Student Affairs and Dean of Students, told FIRE.

Valeria Beasley-Ross has been on the front lines of that work since she began formally coordinating the diversity and inclusion programming at Ole Miss. She accepted a new position as assistant dean for multicultural affairs and volunteer services in 2004 and got to work. 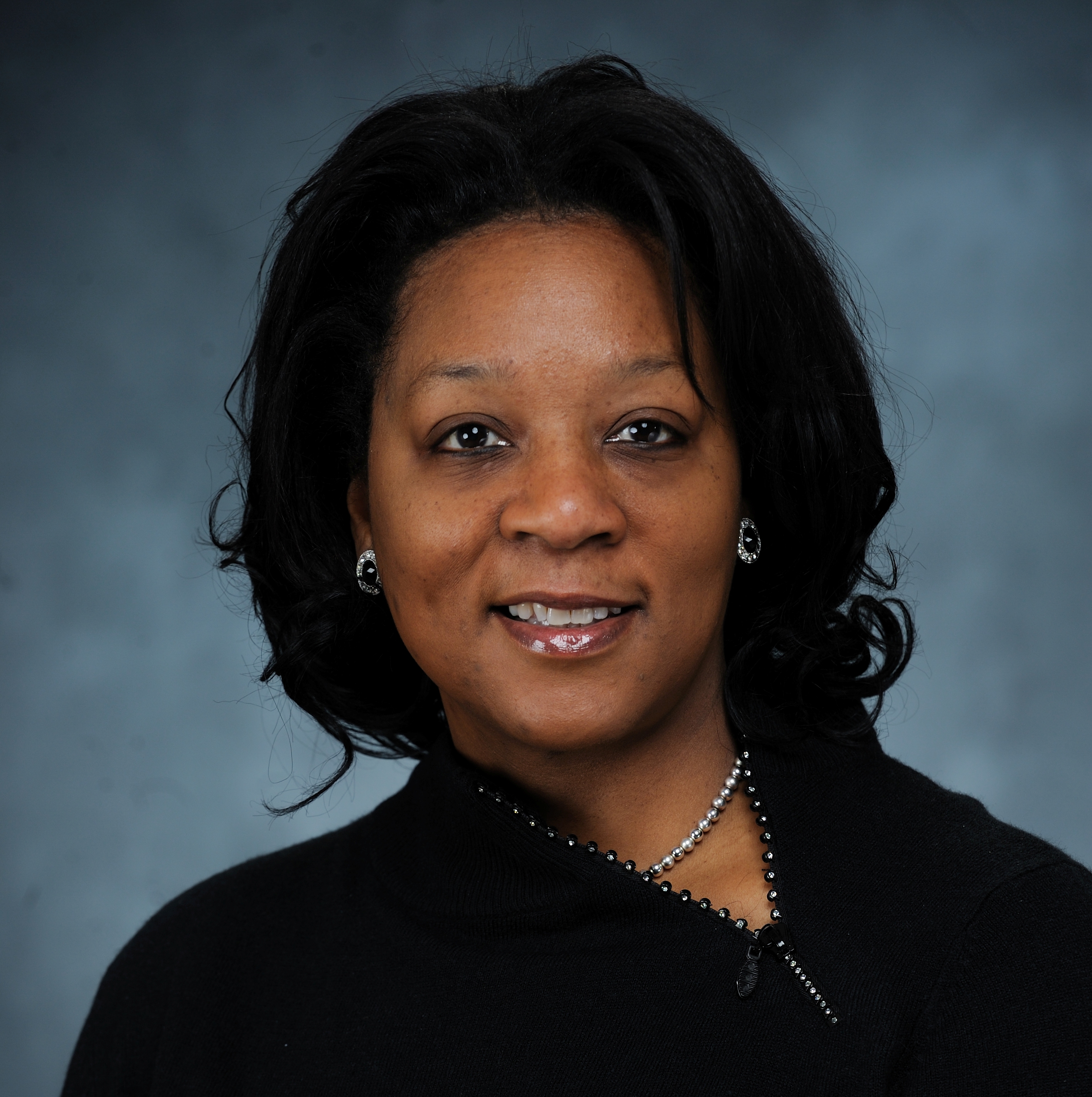 “We started increasing programming at that point,” Beasley-Ross said, citing an already robust African American Studies department and other initiatives she was able to improve upon.

One of those additions was the Center for Inclusion and Cross Cultural Engagement, launched in 2014 to “promote education and understanding across cultures while supporting traditionally underrepresented students.” Ole Miss is also home to the acclaimed William Winter Institute for Racial Reconciliation.

But it is Ole Miss’ commitment to free speech, administrators say, that has been an essential part of their mission to bring students together and find common ground.

“Our goal is to make sure that our [entire] campus is a free speech zone campus, and to make sure that groups can demonstrate their freedom of speech,” Beasley-Ross said. And that goes for any group. Even ones that express viewpoints wholly inconsistent with the school’s diversity and inclusion efforts.

Those efforts, which Beasley-Ross has been building on for more than a decade, were put to to an extreme test in 2009 when the Ku Klux Klan came to campus.

Instead of preventing the Klan from demonstrating, the university’s promise to let all groups express their views provided the opportunity for one of the most moving anti-hate counter-demonstrations we’ve seen here at FIRE.

In the video, a small group of Klansmen stand in the doorway of a campus building as a large groups of students and members of the campus community gather to observe and challenge them.

Boos and a cheer of “Go to hell, KKK! Go to hell,” breaks out in the crowd.

“Go to hell. Nobody wants you,” a woman shouts to the Klansmen.

“She said it best,” another woman replies in agreement.

And in perhaps the most poignant moment, a group among the protesters wearing shirts that read “TURN YOUR BACK ON HATE,” does so. Then, with their backs turned to the Klansmen, they recite the school’s creed:

The University of Mississippi is a community of learning dedicated to nurturing excellence in intellectual inquiry and personal character in an open and diverse environment. As a voluntary member of this community:

I believe in respect for the dignity of each person

I believe in fairness and civility

I believe in personal and professional integrity

I believe in academic honesty

I believe in academic freedom

I believe in good stewardship of our resources

I pledge to uphold these values and encourage others to follow my example.

Beasley-Ross said the experience was educational.

“In terms of the aftermath, I would say the students who had the counter-protest really had some great conversations.” 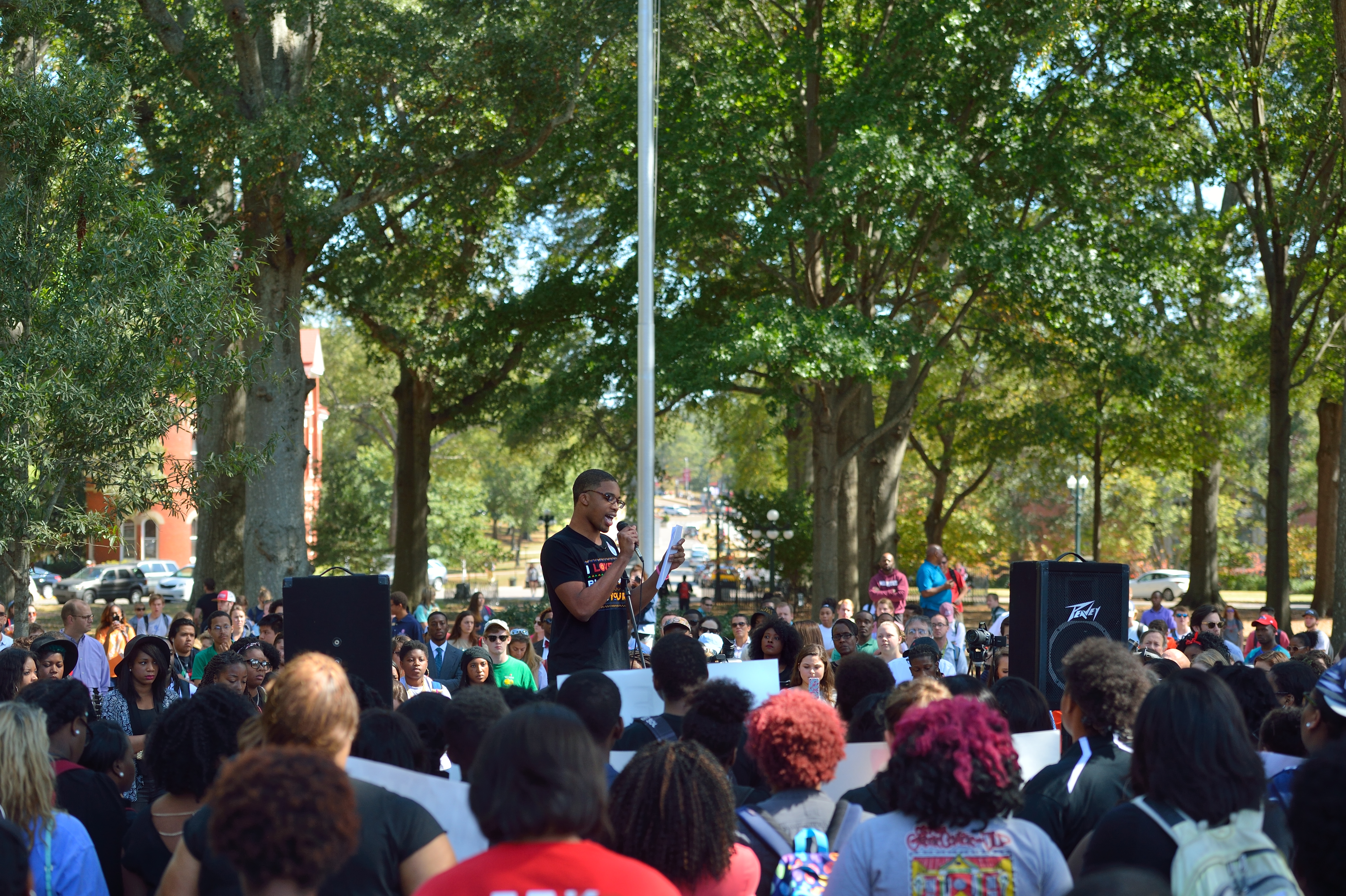 Melinda Sutton added that the school’s insistence on free speech for all has allowed those conversations to continue. This past fall semester included protests over the state flag, which contains the Confederate symbol.

“We had a student [and] they were in support of taking down the state flag, and we actually had an outside group do a counter-demonstration in support of leaving the state flag up. They were happening simultaneously and our students kind of migrated over to where this counter-protest was happening by the outside group,” Sutton said. “There were certainly opposing viewpoints, but we were able to keep everyone safe and allow everyone to express their thoughts on both sides of this issue.”

The decades-long commitment to a brighter future has not been without its setbacks. In February 2014, three students were charged with violating federal civil rights laws when they hung a noose and Confederate flag around the neck of the campus’ commemorative James Meredith statue. One of the students was indicted by a federal grand jury, convicted, and sentenced to prison.

The incident opened old wounds, creating questions about just how far Ole Miss had really distanced itself from its painful past.

“We’re just like any other campus in that we’re going to have these isolated incidents happen,” Sutton said. “The frustrating part sometimes is [that] that’s the headline, and that’s what seems to grab people’s attention. The things that we do day-to-day to help make this an inclusive and welcoming place aren’t the things that are necessarily making the news every day.”

If they were, Sutton says, people would see important debates happening at Ole Miss.

Minds being challenged and changed.

“I remember this past spring we had an outside person come to campus who had fairly strong religious beliefs and students expressed that some of those statements made them uncomfortable and were asking, ‘Why? Why do we allow this person to be here and say these things?’” Sutton said, adding that hearing debate on campus actually benefits students on a number of levels. 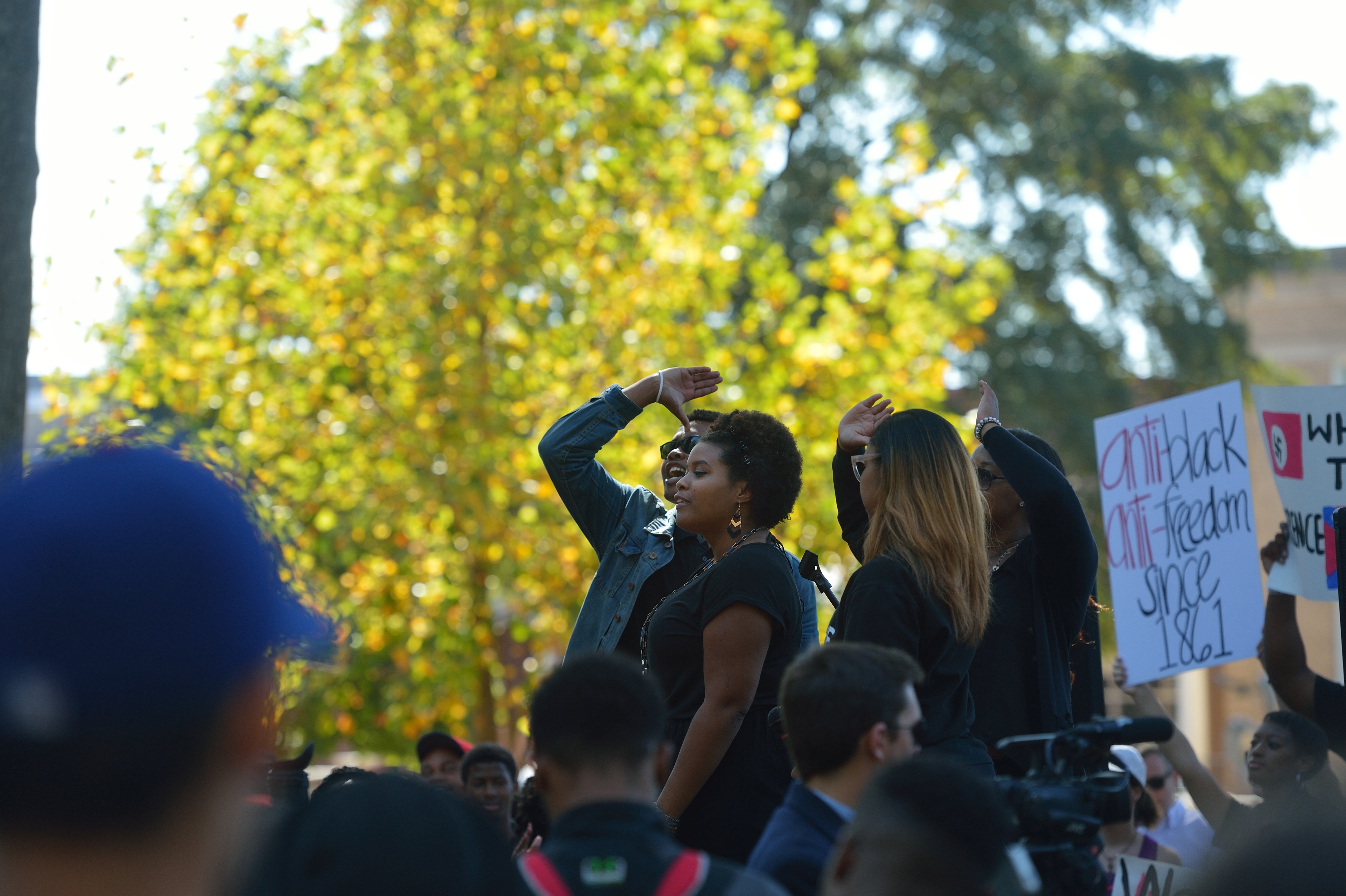 “While it’s educational in that students are able to hear different viewpoints from their own because others are allowed to express [themselves], it’s also educational for them in understanding what the First Amendment really is all about and the importance of allowing the free exchange of ideas. So it’s been educational in a number of ways.”

Sutton and Beasley-Ross have recently helped implement a free speech curriculum into freshman orientation materials to help prepare students to meaningfully engage in this kind of debate.

Beasley-Ross says the community effort to engage students in these important conversations, along with other diversity programming, is making a big difference.

“Have we increased our efforts and increased our numbers of enrolled students of color? Yes we have. I think that’s all as a result of the great work of many individuals on the campus,” she said. “But it’s also it’s the institution’s role in embracing its history and making very specific strides to say, ‘We want to be a premier institution, and leading and saying we’re dedicated to diversity and inclusion.’”

“There are amazing things happening on our campus.”