The University of California, Berkeley has grappled with, and sometimes stumbled, managing its obligations under the First Amendment in recent months. But the start of a fresh academic year brings new chancellor Carol Christ at the helm. And on Tuesday, Christ announced that Berkeley is going to put free speech at the very forefront of campus conversation with a variety of initiatives this year, meaning that the home of the ‘60s Free Speech Movement could be poised to resolve lingering questions about its commitment to free speech for good.

Berkeley’s February cancellation of a planned Milo Yiannopoulos event in response to violence, and subsequent efforts to host similarly controversial speakers like Ann Coulter in April and Ben Shapiro last month, showed Berkeley struggling with attempts to balance safety and free speech. (Berkeley ultimately offered to foot the venue rental bill for Shapiro’s planned September appearance, but not before the Berkeley College Republicans accused the school of trying to censor the event at the outset.) But, with multiple speech-themed events scheduled for the new academic year, efforts toward policy reform, and a general push to make free speech the talk of campus, those problems may have motivated the institution to make positive changes. 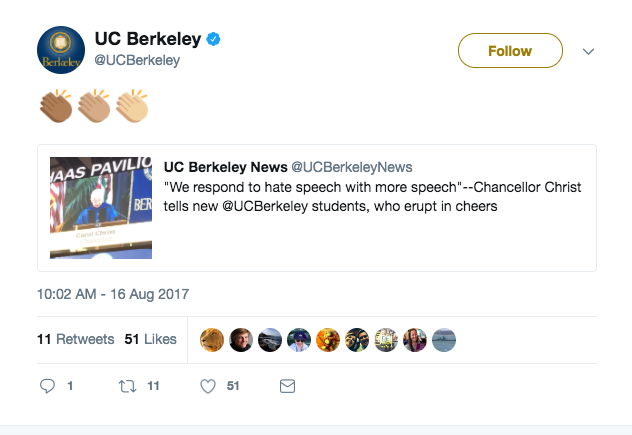 Mogulof confirmed that a number of events, statements, and policy updates are in the works, all of which should clarify and bolster Berkeley’s commitments to campus expression. Those include events like a point-counterpoint-style debate series.

“The idea is to offer a few events where we bring together individuals who have divergent views on a particular topic who are interested in engaging in that difference through passionate, yet civil discourse,” Mogulof said via email. He added that those topics are still up for discussion, “but many are politically polarizing issues.”

Mogulof also told FIRE that chancellor Christ “has relied on the valuable advice of faculty and students to help guide her plans.”

Student groups and campus departments are organizing similar events on their own, and senior administrators are planning two free speech-themed panels — one for faculty and one for students, Mogulof said. Administrators are also working with free speech defense group PEN America on an event focused on a documentary that explores the famous United States Supreme Court case, National Socialist Party of America et al. v. Village of Skokie. (In 1977, the Supreme Court upheld the Illinois Supreme Court’s decision to allow neo-Nazis to march in a small Illinois town with a large population of Holocaust-survivors.) There’s also a “Fireside Chats” series planned, which “the chancellor will hold with a wide range of student groups and will focus on Free Speech issues.”

Finally, Berkeley has been working with FIRE’s Policy Reform team on improving its speech codes — policies that impermissibly restrict speech on campus. The university currently has several “yellow light” policies that could be abused to chill speech on campus; however, with some updates, those policies could be upgraded to our highest, “green light” rating. (FIRE’s Spotlight Speech Code Database has more on our speech code rankings.)

“Now that the summer is over and staff and students have returned to campus, we will be reviewing FIRE’s suggestions for addressing these ambiguities [in our policies],” Mogulof said.

Berkeley’s efforts come on the heels of the California legislature’s passage of a resolution in July urging the state’s universities to adopt pro-speech statements.

Christ plans to formally address all of the new initiatives with the campus community soon.

“Chancellor Christ is currently working on a campus message that will focus exclusively on free speech,” Mogulof said. “It will, in all likelihood, go out next week, and will represent our own institutional stand on the core, free speech issues.”

FIRE is optimistic about these efforts at Berkeley, and will continue covering them in the months to come.