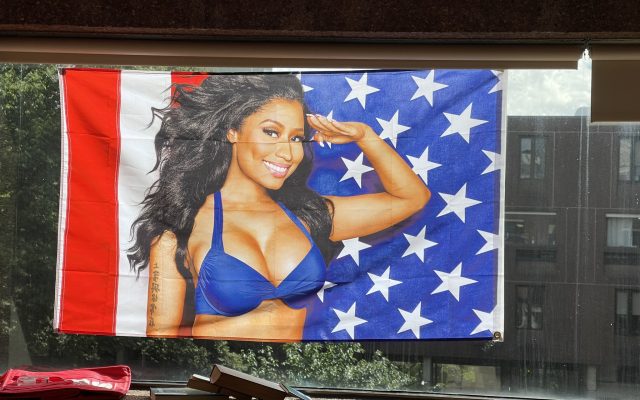 A viral tweet has left Harvard University facing an outcry from an unlikely group of free speech advocates — the Barbz.

Barbz — the name given to the devoted fans of rapper/singer/songwriter Nicki Minaj — have taken to Twitter to defend the expressive rights of several Harvard undergraduate students who were told to take down a flag depicting the rapper hanging in their residence hall window.

On Sept. 5, a Harvard undergrad writing under the Twitter handle @imjustjuice tweeted that he and his suitemates had been contacted and told to remove the flag over concern that “the community will find the flag offensive.” Presumably sent by a Harvard official, the email did not explain how the flag — depicting a bikini-clad Minaj saluting in front of an American flag — could be considered offensive.

@imjustjuice tweeted, accompanied by a photo of the flag and a screenshot of the email:

Harvard really said no Barbz allowed in school 😔 😔 THIS is where harvard draws the line?! #JusticeForNicki. 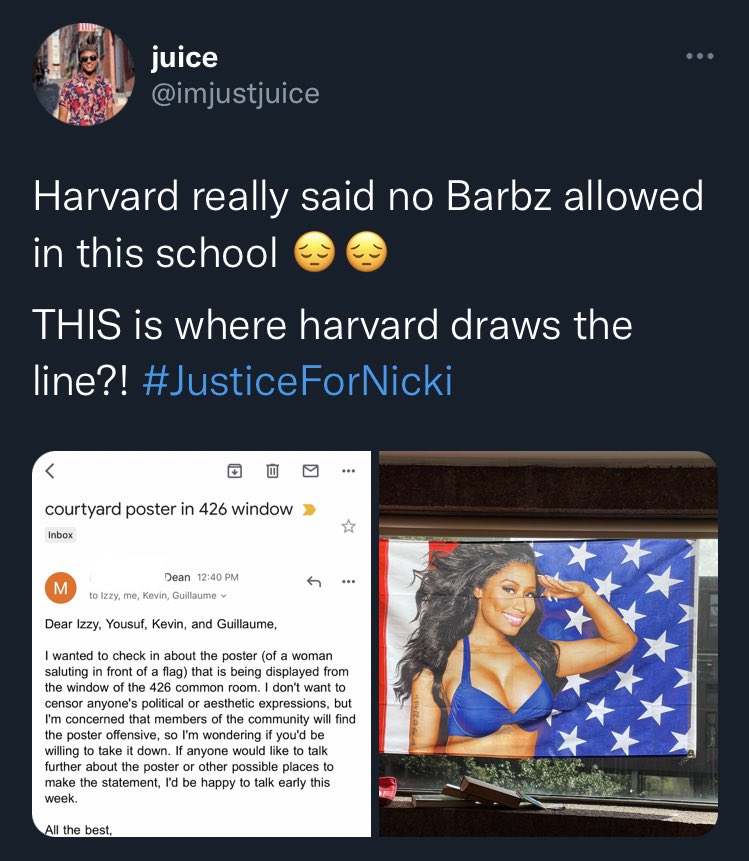 Before making his account private, @imjustjuice tweeted that he deleted the original tweet over concern that Harvard might do something to jeopardize his spot at the university in response to the attention his original tweet received.

FIRE found @imjustjuice’s deleted tweet from the account @barbzstruggle, where it was screenshotted and reposted before being deleted. This repost has since garnered tweets of support from dozens of other Barbz and thousands of likes.

Other Harvard students tweeted at @imjustjuice, indicating that they too were either displaying the flag or planned to display it in solidarity with him and his suitemates.

Whether the suitemates’ flag might offend others, Harvard has adopted clear promises pledging its commitment to students’ freedom of expression. Although private schools like Harvard are not bound by the Constitution, they must keep the promises they make — and freedom of expression doesn’t depend on whether someone else might find your speech offensive.

FIRE wrote a letter to Harvard today, calling for the university to rescind its demand that these students remove the flag and to allow them and other students to display it in the windows of their residences freely. As we write:

Given Harvard’s strong commitment to protect students’ expressive rights and endorsement of a climate of open discourse, including expression of unpopular opinions, students would reasonably expect to be able to express any viewpoint, even those possibly considered offensive to others, without facing institutional backlash.

Harvard must abide by its express commitment to free expression by allowing @imjustjuice and other students to display the flag in their windows, even if certain community members find it offensive.