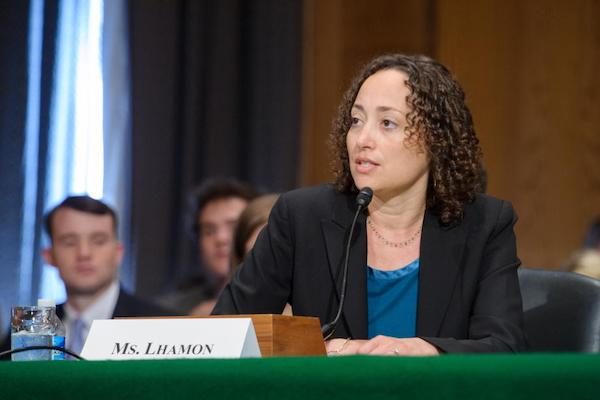 Today, having failed to attract a single Republican senator to support her nomination to lead the Department of Education’s Office for Civil Rights and amid serious concerns about her commitment to due process, Catherine Lhamon was confirmed to the same position she held in the latter part of the Obama administration. Vice President Kamala Harris cast the tie-breaking vote.

Lhamon’s confirmation does not bode well for those who believe Title IX must be enforced in a manner that takes the rights of complainants and those they accuse equally seriously.

During her last stint leading OCR, the agency required institutions to adopt overly broad definitions of sexual harassment that would prohibit a great deal of speech protected under the First Amendment and ignored all but the most egregious due process violations. Lhamon’s OCR saw no problem with schools adjudicating allegations of sexual misconduct without live hearings or meaningful cross-examination.

This approach to enforcing Title IX under Lhamon led to numerous rebukes. For example, in May 2016, 16 tenured faculty at the University of Pennsylvania wrote an open letter criticizing the Lhamon approach:

Although we appreciate the efforts by Penn and other universities to implement fair procedures, particularly in light of the financial sanctions threatened by OCR, we believe that OCR’s approach exerts improper pressure upon universities to adopt procedures that do not afford fundamental fairness. We do not believe that providing justice for victims of sexual assault requires subordinating so many protections long deemed necessary to protect from injustice those accused of serious offenses.

Almost 30 Harvard Law School faculty also raised concerns about Lhamon era Title IX enforcement. In an open letter to the Boston Globe, the professors publicly decried how their law school’s policies “lack the most basic elements of fairness and due process, are overwhelmingly stacked against the accused, and are in no way required by Title IX law or regulation.” Acknowledging that replacing their school’s policy with one that was more consistent with Title IX and with basic tenets of fairness could draw the ire of Lhamon’s OCR, the professors wrote, “We recognize that large amounts of federal funding may ultimately be at stake. But Harvard University is positioned as well as any academic institution in the country to stand up for principle in the face of funding threats.”

Law professors weren’t the only critics of Lhamon’s overreaching enforcement of Title IX. In a white paper released March 2017, the American College of Trial Lawyers concluded:

… we believe that OCR has imposed on colleges and universities an investigative and adjudicative system that does not ensure basic fairness for accused students. Under the current system everyone loses: accused students are deprived of fundamental fairness, complainants’ experiences are unintentionally eroded and undermined, and colleges and universities are trapped between the two, while facing a potential loss of federal funding.

Lhamon-era Title IX enforcement so undermined the rights of the accused that hundreds of due process lawsuits were filed against their institutions, resulting in more than 150 court rulings in accused students’ favor. Included amongst these cases are opinions by three federal appellate courts acknowledging that pressure applied by OCR may have contributed to institutions discriminating against male students to avoid their heavy-handed enforcement.

Thankfully, after Lhamon left OCR, the agency adopted new regulations — having gone through the full notice and comment process required by the Administrative Procedure Act before an agency may enforce binding rules — that have been heralded for their balance. The National Association of Criminal Defense Lawyers noted that the “new regulations ultimately adopted all the due process principles that NACDL argued were essential.”

Writing about the new regulations while they were pending, The Washington Post editorial board declared, “Ms. DeVos is right that there are problems with the current system, and her department’s proposal contains some sensible changes that would bring needed balance to how disciplinary proceedings are conducted.” The Los Angeles Times concluded similarly, “the rules released this week make reasonable changes for the most part, curbing some of the excesses of the previous system.” The editorial elaborated:

Seeking to change that culture of denial, the Obama administration took strong measures to ensure that higher education took this matter seriously.

But there were ways in which its rules swung too far in the other direction, violating accepted norms of due process and basic fairness. Students accused of assault often weren’t notified in advance of the allegations against them, which frequently involved incidents that had occurred many months earlier that they had thought were consensual. They were denied access to evidence against them and were unable to question their accusers, and yet they could be and often were expelled from school if the ruling went against them.

Lhamon’s take on the regulations is less enthusiastic. Rather than acknowledge the overall thoughtfulness of the regulations, she instead tweeted that Betsy DeVos “presides over taking us back to the bad old days, that predate my birth, when it was permissible to rape and sexually harass students with impunity.” This kind of overheated rhetoric is hardly what you would hope for from a civil servant tasked with fairly applying laws and regulations nationwide.

In addition to the civil liberties violations produced by her policies, Lhamon’s prior tenure also raised red flags because under her leadership, OCR continued to enforce unlawful mandates imposed by her predecessor who skipped the notice and comment process required when government agencies seek to enforce their rules. In 2016, when Sen. Lamar Alexander questioned her on where she acquired the authority to treat guidance documents as if they were binding, she infamously told him (52:17 mark of the video), “well, with gratitude, you did when I was confirmed.” Sen. James Lankford, who repeatedly wrote to Lhamon questioning her about her abuse of authority, lamented that he was “acutely dismayed” by her evasive responses.

Given this history, Republican senators were understandably skeptical of Lhamon’s candidacy, but still gave her repeated opportunities during her confirmation hearing to demonstrate that she had learned from her prior mistakes or had developed an appreciation for the rights of the accused. Her answers made clear that she had not. When asked whether she still stood by her tweet about the regulations, she told the committee, “​​I think what I said in the tweet, so, the regulation permits students to rape and sexually harass with impunity.” The regulations clearly do not do this, nor is it reasonable to tell Congress that they do. You may read them for yourself on the Federal Register.

When Sen. Richard Burr asked her about whether she would commit to keeping the presumption of innocence in any revisions to the new regulations that might be set forth by OCR if she were confirmed, she replied:

. . . my view is that civil rights investigators, investigators at schools, need to start from the presumption that the facts are what they are and you need to find out what they are. So they shouldn’t be assuming somebody is guilty because a person has been accused . . . they should be open to the possibility that the person is not. And I absolutely support that and I think that’s important in an investigative process.

As FIRE observed at the time, “[b]eing ‘open to the possibility’ that an accused student is innocent is a far cry from the standard to which Burr referred. Lhamon could not even commit to one of the most basic principles of the American justice system: a presumption of innocence.”

Now that Lhamon is returning to OCR, she will have an opportunity to shape federal Title IX policy through the department’s anticipated revisions to the regulations and through its actions as a regulatory body. If the past is any indicator, OCR will soon return to its one-sided approach that injected unfairness into the process and destroyed the lives of many students in the process.

However, Lhamon also has the opportunity to prove us wrong. She can engage due process advocates like FIRE in good faith, as we pledge to engage with her. She can pursue policy that respects the rights of accusers and accused alike. And she can commit to keeping the key procedural protections in the current regulations. Only time will tell if we are pleasantly surprised. But if the past is prologue, we shouldn’t hold our breath.